The fibre system includes the magnetic buttons with the coupling optics, the fibres, and the slit units. Each plate is equipped with132 MEDUSA fibres: each fibre has a microlens with an aperture of 1.2 arcseconds on the sky which converts the F/15 Nasmyth beam to the F/5GIRAFFE aperture.

The MEDUSA mode is intended for point-like objects, making maximum use of the multiplexing of the facility. A schematic representation of the MEDUSA link for GIRAFFE is given in the above Figure. As GIRAFFE is equipped with a single 2K X 4K detector, a compromise has been necessary in order to maintain a high multiplex while still keeping negligible fibre-to-fibre contamination: a separation of 2.3 fibre cores on the detector has been adopted, which ensures a cross contamination of less than 0.5% among adjacent fibres.

A similar system is implemented for the 8 fibres feeding the UVES red arm, with the difference that the microlenses convert the telescope beam at F/3 instead of F/5 and that the aperture on the sky is only 1 arcsecond.

For several applications, however, more extended apertures are required, while maintaining some spatial resolution and a high spectral resolving power. For this purpose, the GIRAFFE fibre system includes 15 deployable Integral Field Units (IFUs). Each of these units is an array of 20 square microlenses disposed ona rectangular grid. Each microlens has an aperture of 0.52 arcseconds for a total sky coverage of 2x3 arcseconds. In addition, 15 Sky IFUs are available: they are similar to the object IFUs, with the difference that only the central fibre is present. In order to arrange the 315 spectra on the detector, a smaller separation (1.43 fibre core) has been planned. This separation is indeed producing a contamination of several percent between the fibres, but for the IFUs such a contamination is considered acceptable, since it is already present at the fibre entrance.

Finally, FLAMES includes a big Integral Field Unit: Argus. Argus hosts an array of 14 by 22 microlenses and is fixed at the center of the positioner plate. With two possible magnification factors, an aperture of 11.5 by 7.3 or 6.6 by 4.2 arcseconds can be obtained. An atmospheric dispersion corrector maintains the spatial correspondence with the microlenses. The slit geometry is the same as for the IFUs.

For more details, see the press release on IFUs. 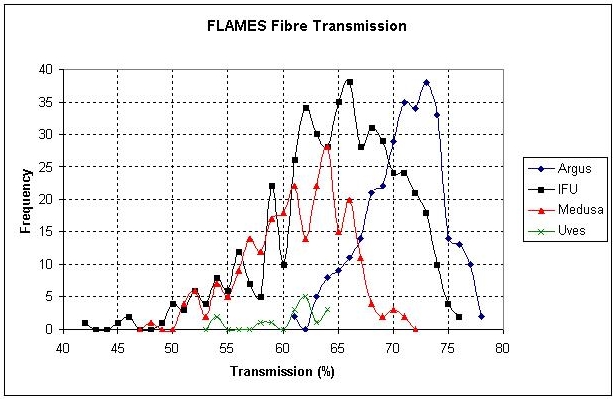 Caption: Histogram of the fibres efficiency for the various modes.