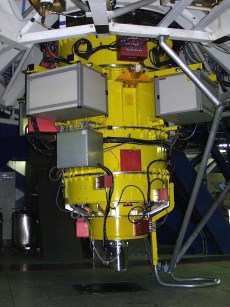 The FORS Upgrade project (FORS-Up) aims at bringing a new life to FORS, which started started regular science operations in 2000. In order to ensure that FORS shall remain operational for at least another 15 years, an upgrade has been planned. This is required as FORS2 is using technology and software that is now obsolete and cannot be put and maintained to the standards in use at the Observatory. The project, carried out as a collaboration between ESO and INAF – Astronomical Observatory of Trieste, aims at bringing to the telescope in 2023 a refurbished instrument with a new scientific detector, an upgrade of the instrument control software and electronics, a new calibration unit, as well as a new set of filters and grisms and a new software for preparing multi-object spectroscopic observations (FIMS). The new FORS will also serve as a test bench for the ELT standard technologies (among them the use of PLCs and of the features of the ELT Control Software). The project aims at minimizing the downtime of the instrument by performing the upgrade on the twin, currently decommissioned, instrument FORS1 and retrofitting the Mask Exchange Unit from FORS2 to FORS1.

February 2019: Workshop for the 20th Anniversary of FORS. See the report here.

The FORS ((FOcal Reducer/low dispersion Spectrograph) instruments are among the most successful instruments in Paranal. Thus, FORS1 led to 1044 refereed publications, while for FORS2 this number is 1616 (as of 01.01.2020). These are multimode (imaging, polarimetry, long slit and multi-object spectroscopy) optical instruments that were part of the 1st generation of VLT instruments. On the VLT, they were the only scientific imagers and low-resolution spectrographs in the visible (until the arrival of VIMOS, which has by now been decommissioned), and the only instruments for absolute polarimetry. Both had motorized multi-object spectroscopy units with 19 slits. FORS2 is unique with its Mask Exchange Unit (MXU). If FORS1 has been decommisioned in 2009, FORS2 is still one of the most demanded and most productive instruments of the VLT.

The FORS Upgrade project will ensure that FORS remain competitve for the next 15 years by:

- replacing the detector to a full frame 4k x 4k CCD, operating from 340 to 1000 nm, with the New Generation Controller

- replacing where needed the motors and other part of the hardware, addressing obsolescence