20 Years of Adaptive Optics at ESO

In 1989, the first Adaptive Optics prototype for ESO COME-ON with a 19 actuators deformable mirror had its first light in France before to be sent to La Silla. 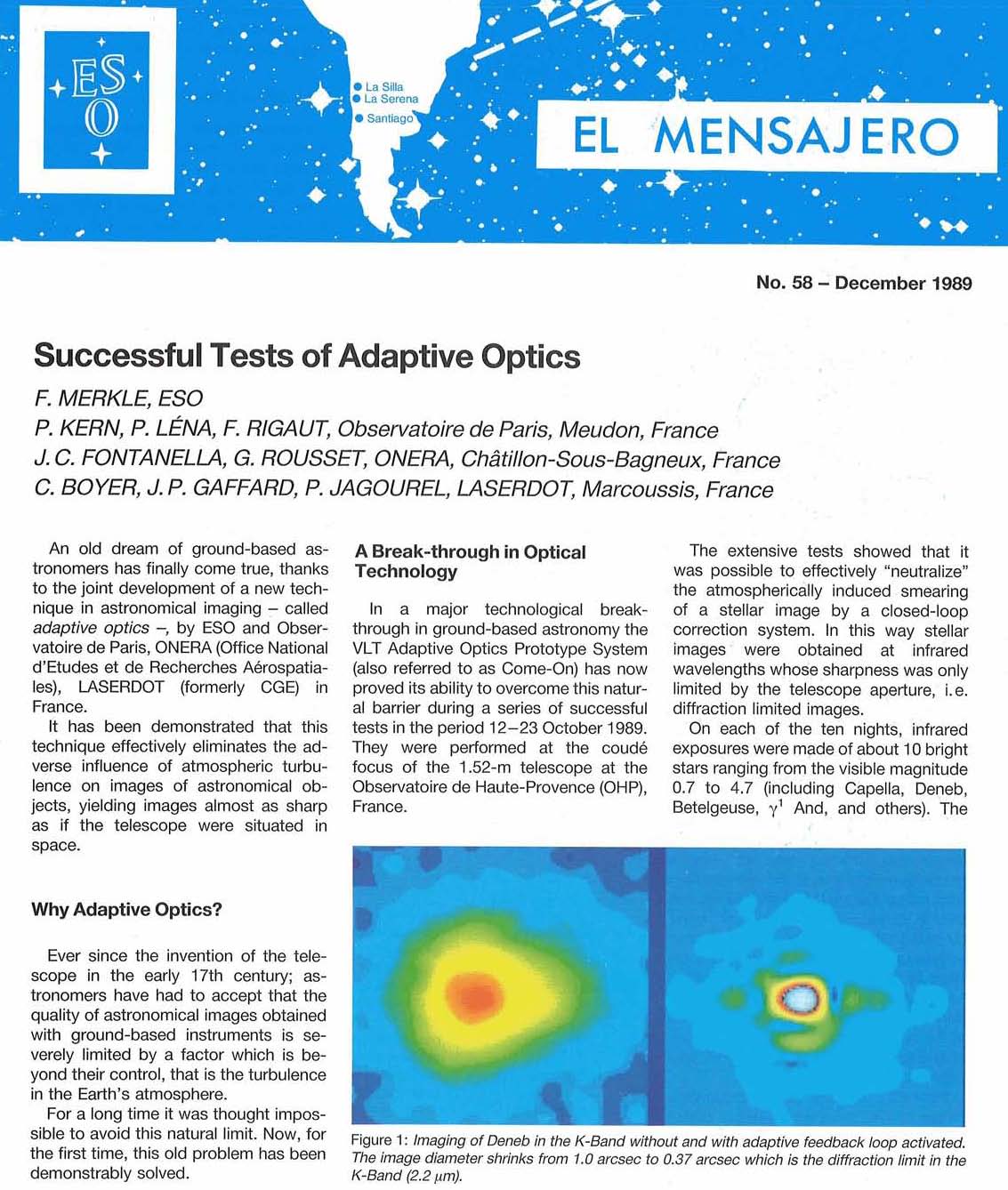 Following successful observing runs performed in 1990 and 1991 with COME-ON prototype at the La Silla 3.6 m telescope, the system was upgraded to COME-ON+ prototype with a 52 actuators deformable mirror (see messenger).

In 1993-94, COME-ON+ was completely refurbished, a "User friendly" control software was developed to easy the operation and a 128x128 infrared imaging camera (SHARPII) was built to offer a larger NIR imaging FoV: this 1st AO based instrument was called ADONIS (see messenger). In 1994, a review paper summarizing the astronomical results obtained with ADONIS was published (see messenger).

Following AO design studies for the VLT, a collaboration agreement was signed in 1997 for the construction of NAOS which was installed at the VLT with the CONICA NIR imager at the VLT in 2001 (messenger article). With 185 actuators, two different Shack-Hartmann wavefront sensors optimized for wavefront sensing in the optical or in the near-infrared, NAOS provided strehl ratio around 70% in the K-band. In 2006 NACO was upgraded to permit the use a Sodium Laser Guide Star ( messenger article).

In parallel the MACAO systems were developped and the first system was commissioned in 2003 followed by 3 other systems the following years. A 60 elements bimorph mirror coupled with a curvature wavefront sensor was installed in the Coude train of each Unit telescope of the VLT to provide corrected images for the VLTI beam recombination (see messenger).Two additional MACAO based instruments were built: SINFONI a NIR 3D Infrared Spectrograph (messenger) in 2004 and CRIRES a NIR Echelle Spectrograph in 2006 (messenger).

In 2007, the feasibility of Multi-Conjugate Adaptive Optics was successfully demonstrated on-sky with the Multi-conjuguate Adaptive optics Demonstrator MAD(see messenger).

AOD is also strongly involved in the Phase B design study of the Adaptive E-ELT and in several phase A of AO-based instruments.

Check for the next lunch Talk.