Assessing Uncertainties in Hubble’s Constant Across the Universe

The tension in the Hubble constant is the one of the potentially most consequential open problems of present-day astrophysics. The early-Universe H0 value inferred from high-precision measurements of the Cosmic Microwave Background (CMB) – assuming the ΛCDM concordance model – differs by 9.4 ± 2.1% (4.4σ) from the cosmology-independent present-day H0 value measured directly using a well-calibrated, empirical cosmic distance ladder composed of classical Cepheid variable stars and type-Ia supernovae (SNIa). Despite intense scrutiny, no straightforward resolutions of the Hubble tension have as yet been identified. On the contrary, the significance of the Hubble tension has increased as distance ladder measurements have become more precise and CMB analyses by the Planck Collaboration have been updated. Independent probes of the late-universe H0, such as TRGB distances and time-delay distances of gravitationally lensed quasars, lend varying levels of support to the interpretation that late- and early-universe H0 values are truly different. This growing Hubble tension increasingly suggests that the otherwise extremely successful ΛCDM concordance model may require revision by new physics. As the community’s excitement is building because of the implied possible breakthrough for fundamental physics, due diligence requires that all measurements be inspected for possible improvements, underlying assumptions, biases, errors, and systematic effects. This is particularly relevant in the case of the highly interdisciplinary Hubble controversy where it is difficult to maintain a clear, birds-eye understanding of issues ranging across basic astrometry, stellar physics, extragalactic astrophysics, general relativity, and cosmology. This conference will bring together researchers across all distance and redshift scales who are interested in critically examining the evidence for Hubble tension, seek to measure H0 with the highest possible accuracy and explore the possible cosmological implication of the tension.

The conference will provide a crucial forum for understanding the astrophysical bases of the various measurements and for identifying possible improvements, benefitting from the diverse expertise available across the implied research communities. Keynote speakers include experts who are deeply involved in the astrometric modelling of Gaia data, various stellar standard and standardisable candles, distance rulers, gravitational lenses, baryon-acoustic oscillations, standard sirens, the interstellar medium, and the cosmic microwave background, among others. Invited speakers will be instructed to focus their presentations on the physics, concepts, assumptions, limitations, and possible pitfalls underlying their methods and to make a specific effort to explain how changes in methodology would affect their determination of H0.

We further anticipate discussing near-future improvements expected from next generation ground- and space-based instrumentation and surveys, as well as the latest results and outlook for gravitational wave-based standard siren observations with LIGO and VIRGO that offer a new, completely independent route to H0. Given the crucial role of the Hubble constant as prior for CMB analyses, we also anticipate discussing synergies with ongoing and planned CMB experiments.

To round off the workshop, we plan to have a long panel discussion aimed at clarifying any further questions related to the Hubble tension and the evidence it is based on. In this way, we hope that this workshop will contribute to clarifying the status of the current H0 controversy, and whether the community will continue referring to it as a tension, or whether the evidence is sufficiently clear to call it a discrepancy.

For information please contact h0@eso.org. If you want to receive future information on the workshop, please fill in the registration form. 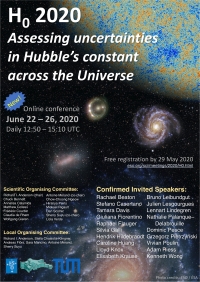