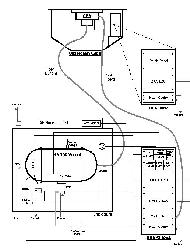 Overview of the HARPS system with the HARPS Cassegrain Fibre Adapter at the top (its control rack next to it), the spectrograph at lower left and the rack containing the calibration unit at lower right. Two fibre links connect the main components

HARPS is a fibre-fed cross dispersed echelle spectrograph located in the coude-west room in the building of the 3.6m telescope. Its science driver is the search for extrasolar planets using the radial velocity method with an accuracy of 1m/sec. This accuracy will be reached with the Simultaneous THAr Reference method.

The La Silla 3.6m telescope is equatorially mounted; HARPS uses its Cassegrain focus. A general description of the telescope is here and more details about pointing, tracking etc can be found here.

Pictures of La Silla and the 3.6m telescope can be found in the ESO Public Image Archive.

To connect the fibre link to the telescope, the La Silla Engineering Department designed and manufactured a new fibre adapter for the Cassegrain focus. The HARPS Cassegrain Fibre Adapter (HCFA) fulfils a number of functions: It allows the remotely controlled exchange of the fibres for HARPS and the CES and provides both fibre feeds with an atmospheric dispersion compensator (ADC) and the possibility to use the telescope's guide camera for guiding on the respective fibre entrance. For HARPS, there is also a neutral density filter and the feed for the calibration fibre which carries the light from a separate calibration unit. This is a crucial part of the calibration concept of HARPS. As a unique feature, HARPS will offer the observer two options for precise wavelength calibration: the default Simultaneous Thorium reference method and the use of the Iodine absorption cell. This Iodine cell is also mounted in the HCFA and can be moved in and out of the telescope beam under remote control.

More pictures of the HCFA can be found in the picture gallery.

Strictly speaking HARPS is a distributed system, and one of the most important components connecting its various parts is the observation fibre link. Its purpose is to feed the spectrograph down in the telescope building with (a) the star light collected at the Cassegrain focus and with (b) either the ThAr spectrum for the simultaneous calibration or with light from the night sky for better sky subtraction. For HARPS we chose two 70 micron fibres (type FVP made by Polymicro), corresponding to 1 arcsecond on the sky, and put it in a "shower tube" made of sturdy steel mesh for mechanical protection. The total length of the fibres from the Cassegrain focus to the spectrograph entrance (by way of the declination bearing, telescope fork, northern telescope mount bearing and into the coude west room) is 38 metres.

To minimise focal ratio degradation, the light is coupled into the object and reference fibres by means of two microlens doublets per fibre. By projecting the image on the fibre input end, the telescope pupil is at infinity. This design combines an excellent image quality with easy, uncritical alignment.

A double image scrambler is located at the entrance of the object/reference fibres into the vacuum vessel of the spectrograph. In combination with the fibre feed, it serves to stabilise the spectrograph illumination: the object may move at the fibre entrance due to guiding errors or seeing, but the intensity distribution at the fibre exit, i.e. the spectrograph entrance, will not change. In addition the scrambler serves as the feedthrough for the fibres into the vacuum and it also houses, on the atmosphere side, the exposure shutter.

The HARPS vacuum vessel and spectrograph.

The second fibre link leads, as mentioned before, from the calibration unit in the coude west room up to the Cassegrain focus. It is therefore also about 38 metres long, consisting of a pair of 300 micron core diameter fibres (type FVP made by Polymicro).

Pictures of the fibre link and scrambler can be found in the picture gallery.

The vacuum vessel has the purpose of protecting the spectrograph proper from temperature variations and from the effects of refractive index variations of air. This vessel has a volume of approximately 2m3. It is evacuated by means of a turbo molecular pump before the start of operations; we expect to repeat the regeneration of the vacuum about once or twice per month.

Since the long term stability of the spectrograph is of paramount importance for the success of the exoplanet search, the vacuum should be broken as seldom as possible. For this reason there are no moving functions inside the vacuum except the focussing mechanism of the camera. This will however be adjusted and locked before the vessel is finally closed.

The spectrograph itself is a cross dispersed echelle spectrograph, very similar to UVES at the VLT. It is a white pupil design with the grism cross disperser placed in the white pupil. The echelle grating, a copy of the UVES mosaic, is operated in quasi-Littrow condition. An f/2.1 parabolic mirror serves as collimator and is used in triple pass. A dioptric camera images the cross-dispersed spectra (one each from the object and reference fibres) side by side onto a mosaic of two 2kx4k EEV CCDs. 68 orders cover a spectral range from 378-691nm. All optical components are mounted on a stainless steel optical bench. The optical parameters are listed in the following table.

Pictures of the spectrograph can be found in the picture gallery.

HARPS employs a mosaic of two EEV type 44-82 CCDs (nicknamed Jasmin and Linda). The spectral format is thus 4096x4096 pixels (15 micron square) of which a field of 62.7x61.4mm is actually used at a sampling of 4 pixels per spectral element. The main properties of the chips is summarised in the following table. The performance (quantum efficiency, RON etc) can be found here.

As HARPS is a stationary instrument, its detectors are cooled by a continuous flow cryostat (CFC) of the current ESO standard design. A special feature of the HARPS cryostat is however the fact that the detector head is mounted to the spectrograph bench inside the vacuum vessel, with the actual CFC outside. Both are connected by a stainless steel bellows which protects the detector high vacuum (10E-6 mbar) from the mere "emptiness" (10E-2 mbar) of the spectrograph vessel. The detector head window also serves as field lens of the camera optics.

As a consequence of this configuration, all cables connecting the detector head to the FIERA controller have to pass through vacuum feed throughs.

Here you can find more information on both Jasmin and Linda.

More pictures of the detector system can be found in the picture gallery.

Calibration Unit: The HARPS calibration unit provides the instrument with light for wavelength and flatfield calibration. For this purpose it contains a set of hollow-cathode Thorium-Argon and halogen lamps which can be remotely switched on and off. A motorised exchange mechanism allows to position the calibration fibre in front of any desired lamp. The calibration fibre pair connects the calibration unit, which is located next to the climatised HARPS enclosure in the coude west room,with the fibre adapter at the Cassegrain focus.

Pictures of the calibration unit can be found in the picture gallery.

Exposure meter: In order to improve the observing efficiency by always applying the correct exposure time (according to the selected signal-to-noise ratio SNR) we fitted an exposure meter, again following the example of UVES. Two photon counters are used to separately measure the light coming from the object and reference fibres which is reflected off the gap on the echelle between the two gratings comprising the mosaic.

Pictures of the exposure meter can be found in the picture gallery.

Iodine cell: An iodine cell is built into the HCFA to allow use of the Iodine self-calibration method. A second Iodine cell is included in the Calibration Unit so that a continuum light with the iodine spectrum in absorption can be projected into the reference fibre.

Pictures of the iodine cell can be found in the picture gallery.

Thermal enclosure: In order to keep the spectrograph temperature as constant as possible it was decided to put the vacuum vessel in an additional thermal enclosure. This is a well insulated room on the coude floor of the 3.6m telescope building which is itself already temperature stabilised. Based on preliminary measurements we expect to keep the temperature variations of the spectrograph bench inside the vacuum vessel (the only place that really matters) below 0.1K, ideally at 0.01K!

Pictures of the HARPS enclosure can be found in the picture gallery.

HARPS uses the VLT Data Flow System, from the preparation of Observation Blocks with P2PP through the use of BOB at the telescope to a full online data reduction pipeline.

All raw data are stored in the local archive and later in the central Garching science archive. In addition, all observations are automatically reduced in near real time by a pipeline running on a dedicated workstation: if the observer uses the high-precision Simultaneous Th Reference mode, he will have available all final radial velocities at the end of the night. All data can be immediately written to DVD-ROM. For details see here.