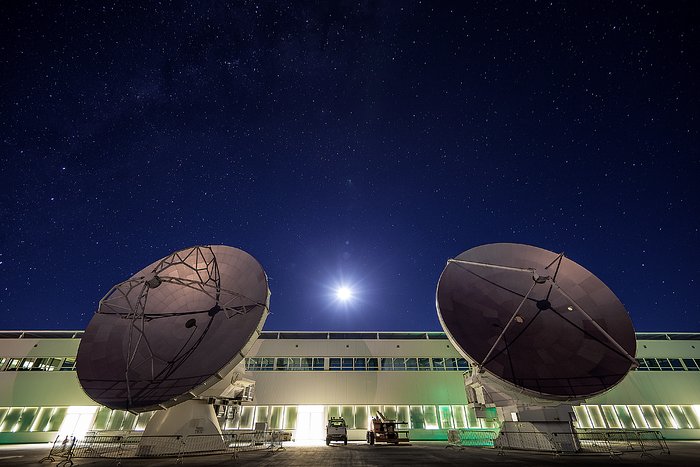 This image shows the Operations Support Facility (OSF) for the Atacama Large Millimeter/sub-millimeter Array (ALMA) with the dazzling Moon above and two 12-metre antenna dishes in the foreground.

The OSF, located at 2900 metres above sea level in the Chilean Andes, is a hub of ALMA-related activity. As well as housing staff and contractors, the facility hosts all the scientific operations related to the array’s daily operation. The two antennas pictured here, for example, were brought back from their observational site to check their functionality as they sit on special calibration pads. Such tests check the computers and motors and ensure that the antenna surfaces are accurate to less than the thickness of a human hair, and can be pointed precisely enough to spot a golf ball sitting 15 kilometres away.

Once these antennas have completed their check-up, they will rejoin their counterparts on the Chajnantor Plateau at 5000 metres above sea level. Weighing around 100 tonnes each, they will return to the high plateau on the two huge custom-designed ALMA transporters. Known as Otto and Lore, these mammoth machines will — at a top speed of 12 kilometres per hour — move the antennas back to their observing positions, where they will again help to explore the mysteries of the Universe.