Imagen eso0109a
The heavily obscured centre of Centaurus A

Imagen eso0109b
ISAAC spectrum of the centre of Centaurus A 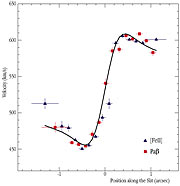