ISAAC spectrum of the centre of Centaurus A 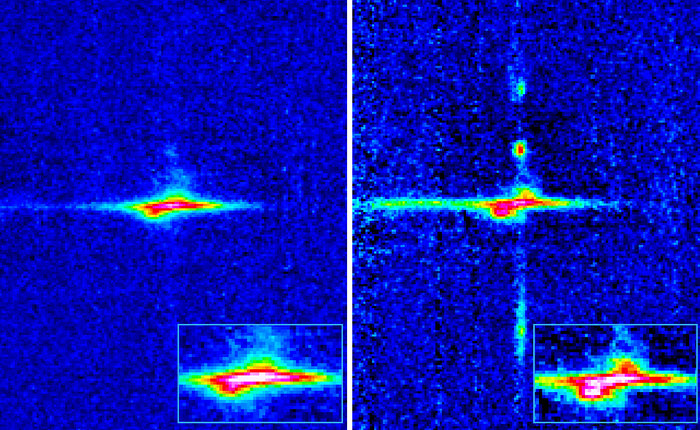 Two wavelength regions of one of the infrared ISAAC spectra of the center of Centaurus A. The direction of the long spectrograph slit is vertical and the dispersion (wavelength) direction is horizontal; longer wavelengths are towards the right. The two emission lines shown originate in singly ionized Iron ([FeII]; rest wavelength 1256.68 nm) and in Hydrogen (Paschen-Beta; 1281.81 nm) and both are clearly tilted. This is due to the rapid rotation of the accretion disk surrounding the supermassive black hole in the center of the galaxy. The light from the receding edge of the disk is Doppler-shifted towards the red (to the right) and the light from the part of the disk approaching us is shifted to the left. This may be better seen in the inserted enlargements. Therefore the inclined disk shows a tilted spectrum. These motions may be represented in a rotation curve, cf. ESO Press Photo eso0109. There are other emitting areas above and below the nucleus, especially in the Paschen-Beta line.