A Dark Tour of the Universe

ESO Fellow Chris Harrison has led a project to design and produce an astronomical show aimed at people who are blind or visually impaired. A Dark Tour of the Universe offers a tactile experience of the Universe by using 3D models of astronomical images and sonification of real astronomical datasets. The show premieres at the British Science Festival on 13 September 2019.

The show starts with stars appearing as they are from the platform of ESO’s Very Large Telescope in Chile, on the night of 13 September 2019. Using real data of position, magnitudes and colours of stars, a beautiful surround-sound effect is created, allowing the audience to listen to the stars appear.

Other highlights of the show include listening to variable stars and to galaxies merging, and feeling 3D models of some of ESO’s best astronomical images, including the first picture of a black hole and the 360-degree panoramic image of the Milky Way, taken by our Photo Ambassador Serge Brunier. One of the datasets that has been sonified is related to the discovery of exoplanet NGTS-1b, using the Next Generation Transit Survey (NGTS) instrument at ESO’s Paranal Observatory. NGTS-1b was the third gas giant to be observed transiting an M-dwarf star.

People who have sight are also encouraged to attend the show. They will gain a lot from the experience, as they will be blindfolded.

The project, in collaboration with BMW, has been shortlisted for the prestigious industrial TCT awards, which are celebrating the innovators, technologies and collaborators behind the leading examples of additive manufacturing, 3D printing, design and engineering across the globe. The awards ceremony will take place on 25 September 2019.

The project was led by ESO Fellow Chris Harrison, who worked with various astronomers at ESO, including other fellows and students. Chris built upon his experience of producing planetarium shows for the ESO Supernova as part of his fellow duties, while conducting research at ESO Headquarters in Garching near Munich.

James Reevell, a UK musician and teacher, created all of the music and “composer’s impressions” for the show. He used an ESO-produced simulation movie of a black hole as inspiration for one of his compositions.

This sonified material allows the audience to listen to the stars appear as they did on 13 September 2019 at ESO’s Very Large Telescope in Chile. The sounds heard represent each star (brightest stars appear first) and the pitch of the sound represents the colour of the star. Time has been sped up. The position of the star in the surround sound systems is also tied to the real position on the night sky. However, the audio file has been modified from full surround sound (6.1) to stereo. This material is part of the A Dark Tour of the Universe astronomy show for the blind and visually impaired.

B — Listen to a Cataclysmic Variable star

Some stars are very variable and have huge changes in brightness as they flare up. This sonified material allows the audience to listen to a Cataclysmic Variable star (V344 Lyr) that shows both short, low-amplitude (lasting for approximately 5 days) and long, large-amplitude (lasting for approximately 15 days) outbursts. The data were taken from NASA’s Kepler mission that tracks how the star varies in brightness through time. This material is part of the A Dark Tour of the Universe astronomy show for the blind and visually impaired, but it has been modified from full surround sound (6.1) to stereo.

Over a timespan of millions to billions of years galaxies can attract each other and subsequently collide or merge. The Milky Way galaxy will eventually collide with the Andromeda galaxy. Although we can not watch this process in real galaxies because it takes too long, we can create a simulation in a computer to speed up time. This sonified material allows the audience to listen to two galaxies merging, and the surround sound enables them to hear the galaxies approach from each side and orbit around each other before finally merging together. This material is part of the A Dark Tour of the Universe astronomy show for the blind and visually impaired, but it has been modified from full surround sound (6.1) to stereo.

Zdjęcie ann19045a
Montage of 3D models and their visual counterparts 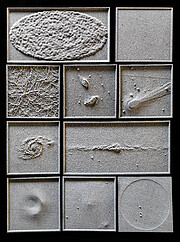