A taste of ESPRESSO 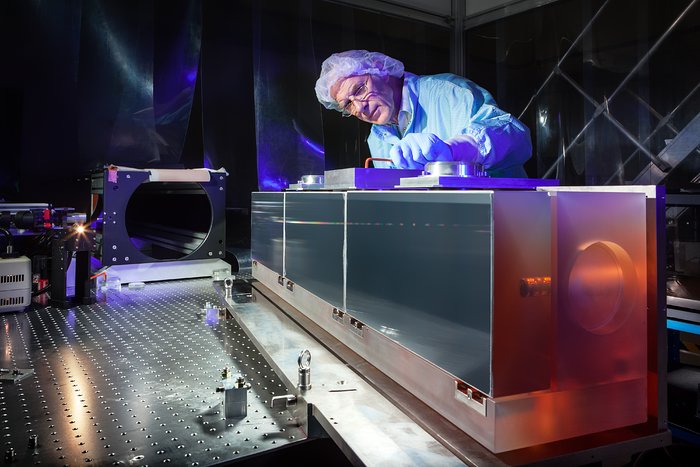 The huge diffraction grating at the heart of the ultra-precise ESPRESSO spectrograph — the next generation in exoplanet detection technology — is pictured undergoing testing in the cleanroom at ESO Headquarters in Garching bei München, Germany.

Engineers at ESO have recently completed the difficult process of aligning the grating. The production and alignment of this component is one of the key ESO contributions to the ESPRESSO project. The grating is the largest ever assembled at ESO, and its length matches the largest echelle grating ever made — the 1.2 x 0.3 metre grating for the HIRES spectrograph at the Keck 10-metre telescope.

After its final alignment, the grating is fixed in a permanent mount. All its components are made of Zerodur (the same material that is used for the mirrors of the VLT) and will require no further adjustments, ever. This mounting technique was pioneered at ESO, and demonstrated to work on earlier instruments.

When installed at ESO’s Paranal Observatory in Chile in 2016, ESPRESSO will combine the light from all four Unit Telescopes of the Very Large Telescope to create a virtual 16-metre aperture telescope. Its diffraction grating will split up the light into its component colours for analysis — spreading the light as a prism does, although relying on a different physical mechanism.

The successor of HARPS — the world’s foremost exoplanet hunter — ESPRESSO will take the search for exoplanets to the next level, allowing astronomers to search for Earth-like planets around nearby stars in the habitable zone [1]. It will have many other science applications, including the search for possible variations in the constants of nature at different times in the life of the Universe, and in different directions, through the study of light from very distant quasars.

[1] A planet in orbit around a star introduces a small and regular variation in the velocity component as measured along the line of sight (known as the radial velocity) by a distant observer on Earth. This variation can be observed as a “wobble” in the spectrum of the star as the lines shift to and fro about their central position as a result of the Doppler effect. As the planet moves away from the observer, the radial velocity change induces a shift of the star’s spectrum towards longer wavelengths (a redshift) and shorter wavelengths as it moves closer (a blueshift). These tiny shifts in the position of the star’s spectrum on the detector are on the order of a few nanometers, but can nevertheless be measured with ESPRESSO and used to infer the presence of planets.

ESPRESSO (Echelle SPectrograph for Rocky Exoplanet and Stable Spectroscopic Observations) is being developed by a consortium consisting of ESO and seven additional scientific institutes: