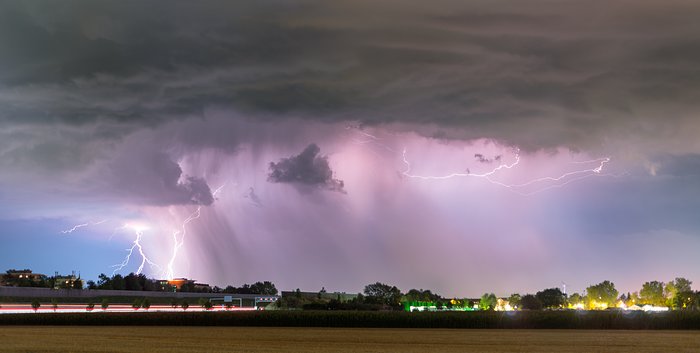 From 18 to 20 July 2017 western Germany endured intense storms. Thunder and lightning storms lit numerous fires and drove water levels to some 1.5 metres high, flooding streets and basements across the region.

Although destructive, these storms brought their own impressive beauty. In Garching bei München, home to ESO’s Headquarters, ESO photo ambassador Petr Horálek captured this beautiful photograph of the storm over the road connecting Munich to Berlin.

Interestingly, the sky surrounding the storm is tinged with purple. Exotic colours in the sky, such as red, green, orange or purple, usually indicate the presence of charged particles in the atmosphere, often caused by weather systems and cloud formations. The colour of the sky is also related to temperature of any lightning bolts, their distance from us, the way their light is distorted before hitting our eyes, and the time of day, since the angle of sunlight as it enters and refracts through the clouds creates different colours in the atmosphere. Since most thunderstorms occur in the late afternoon, as this one did, we often see vivid colours appearing within the turbulent clouds. Purple is the colour most usually observed, and indicates that the brewing storm is likely to be a rainy one!