Ripped Apart by a Black Hole

New observations from ESO’s Very Large Telescope show for the first time a gas cloud being ripped apart by the supermassive black hole at the centre of the galaxy. The cloud is now so stretched that its front part has passed the closest point and is travelling away from the black hole at more than 10 million km/h, whilst the tail is still falling towards it.

In 2011 ESO's Very Large Telescope (VLT) discovered a gas cloud with several times the mass of the Earth accelerating towards the black hole at the centre of the Milky Way (eso1151) [1]. This cloud is now making its closest approach and new VLT observations show that it is being grossly stretched by the black hole’s extreme gravitational field.

"The gas at the head of the cloud is now stretched over more than 160 billion kilometres around the closest point of the orbit to the black hole. And the closest approach is only a bit more than 25 billion kilometres from the black hole itself — barely escaping falling right in," explains Stefan Gillessen (Max Planck Institute for Extraterrestrial Physics, Garching, Germany) who led the observing team [2]. "The cloud is so stretched that the close approach is not a single event but rather a process that extends over a period of at least one year."

As the gas cloud is stretched its light gets harder to see. But by staring at the region close to the black hole for more than 20 hours of total exposure time with the SINFONI instrument on the VLT — the deepest exposure of this region ever with an integral field spectrometer [3] — the team was able to measure the velocities of different parts of the cloud as it streaks past the central black hole [4].

"The most exciting thing we now see in the new observations is the head of the cloud coming back towards us at more than 10 million km/h along the orbit — about 1% of the speed of light," adds Reinhard Genzel, leader of the research group that has been studied this region for nearly twenty years. "This means that the front end of the cloud has already made its closest approach to the black hole."

The origin of the gas cloud remains mysterious, although there is no shortage of ideas [5]. The new observations narrow down the possibilities.

"Like an unfortunate astronaut in a science fiction film, we see that the cloud is now being stretched so much that it resembles spaghetti. This means that it probably doesn’t have a star in it," concludes Gillessen. "At the moment we think that the gas probably came from the stars we see orbiting the black hole."

The climax of this unique event at the centre of the galaxy is now unfolding and being closely watched by astronomers around the world. This intense observing campaign will provide a wealth of data, not only revealing more about the gas cloud [6], but also probing the regions close to the black hole that have not been previously studied and the effects of super-strong gravity.

[2] The distance of closest approach is about five times the distance of the planet Neptune from the Sun. This is much too close for comfort to a black hole with a mass four million times that of the Sun!

[3] In an integral field spectrometer the light recorded in each pixel is separately spread out into its component colours and so spectra are recorded for each pixel. The spectra can then be analysed individually and used to create maps of the velocities and the chemical properties of each part of the object, for example.

[4] The team is also hoping to see evidence of how the rapidly moving cloud interacts with any ambient gas around the black hole. So far nothing has been found, but further observations are planned to look for such effects.

[5] Astronomers thought that the gas cloud might have been created by stellar winds from the stars orbiting the black hole. Or possibly even be the result of a jet from the galactic centre. Another option was that a star was at the centre of the cloud. In this case the gas would come either from a wind from the star, or from a planet-forming disc of gas and dust around the star.

[6] As this event at the centre of the galaxy unfolds, astronomers expect to see that the evolution of the cloud switches from purely gravitational and tidal to complex, turbulent hydrodynamics.

This research was presented in a paper "Pericenter passage of the gas cloud G2 in the Galactic Center", by S. Gillessen et al, to appear in the Astrophysical Journal.

ESO is the foremost intergovernmental astronomy organisation in Europe and the world’s most productive ground-based astronomical observatory by far. It is supported by 15 countries: Austria, Belgium, Brazil, the Czech Republic, Denmark, France, Finland, Germany, Italy, the Netherlands, Portugal, Spain, Sweden, Switzerland and the United Kingdom. ESO carries out an ambitious programme focused on the design, construction and operation of powerful ground-based observing facilities enabling astronomers to make important scientific discoveries. ESO also plays a leading role in promoting and organising cooperation in astronomical research. ESO operates three unique world-class observing sites in Chile: La Silla, Paranal and Chajnantor. At Paranal, ESO operates the Very Large Telescope, the world’s most advanced visible-light astronomical observatory and two survey telescopes. VISTA works in the infrared and is the world's largest survey telescope and the VLT Survey Telescope is the largest telescope designed to exclusively survey the skies in visible light. ESO is the European partner of a revolutionary astronomical telescope ALMA, the largest astronomical project in existence. ESO is currently planning the 39-metre European Extremely Large optical/near-infrared Telescope, the E-ELT, which will become "the world's biggest eye on the sky". 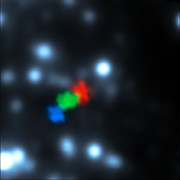 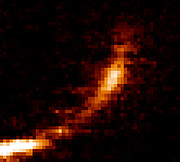 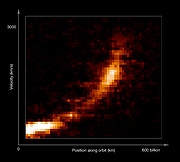 PR Video eso1332c
Gas cloud falling in towards the black hole at the centre of the Milky Way
Send us your comments!
Subscribe to receive news from ESO in your language
Accelerated by CDN77
Terms & Conditions