Sifting through Dust near Orion's Belt

A new image of the region surrounding the reflection nebula Messier 78, just to the north of Orion’s Belt, shows clouds of cosmic dust threaded through the nebula like a string of pearls. The observations, made with the Atacama Pathfinder Experiment (APEX) telescope[1], use the heat glow of interstellar dust grains to show astronomers where new stars are being formed.

Dust may sound boring and uninteresting — the surface grime that hides the beauty of an object. But this new image of Messier 78 and surroundings, which reveals the submillimetre-wavelength radiation from dust grains in space, shows that dust can be dazzling. Dust is important to astronomers as dense clouds of gas and dust are the birthplaces of new stars.

In the centre of the image is Messier 78, also known as NGC 2068. When seen in visible light, this region is a reflection nebula, meaning that we see the pale blue glow of starlight reflected from clouds of dust. The APEX observations are overlaid on the visible-light image in orange. Sensitive to longer wavelengths, they reveal the gentle glow of dense cold clumps of dust, some of which are even colder than -250ºC. In visible light, this dust is dark and obscuring, which is why telescopes such as APEX are so important for studying the dusty clouds in which stars are born.

One filament seen by APEX appears in visible light as a dark lane of dust cutting across Messier 78. This tells us that the dense dust lies in front of the reflection nebula, blocking its bluish light. Another prominent region of glowing dust seen by APEX overlaps with the visible light from Messier 78 at its lower edge. The lack of a corresponding dark dust lane in the visible light image tells us that this dense region of dust must lie behind the reflection nebula.

Observations of the gas in these clouds reveal gas flowing at high velocity out of some of the dense clumps. These outflows are ejected from young stars while the star is still forming from the surrounding cloud. Their presence is therefore evidence that these clumps are actively forming stars.

At the top of the image is another reflection nebula, NGC 2071. While the lower regions in this image contain only low-mass young stars, NGC 2071 contains a more massive young star with an estimated mass five times that of the Sun, located in the brightest peak seen in the APEX observations.

The APEX observations used in this image were led by Thomas Stanke (ESO), Tom Megeath (University of Toledo, USA), and Amy Stutz (Max Planck Institute for Astronomy, Heidelberg, Germany). For more information about this region as seen in visible light, including the recently discovered — and highly variable — McNeil’s Nebula, see eso1105. 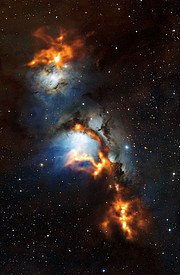 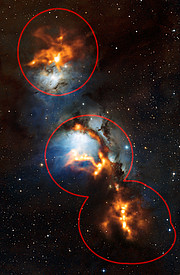 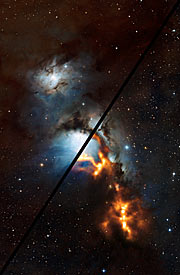 Sifting through Dust near Orion’s Belt (mouseover comparison)
Send us your comments!
Subscribe to receive news from ESO in your language
Accelerated by CDN77
Terms & Conditions