A Grand Vision for European Astronomy

Europe unveils its Scientific Strategies for the next 20 Years

Today, and for the first time, astronomers share their global Science Vision for European Astronomy in the next two decades. This two-year long effort by the ASTRONET network of funding agencies, sponsored by the European Commission and coordinated by INSU-CNRS, underscores Europe's ascension to world leadership in astronomy and its will to maintain that position. It will be followed in just over a year by a prioritised roadmap for the observational facilities needed to implement the Vision. Implementation of these plans will ensure that Europe fully contributes to Mankind's ever deeper understanding of the wonders of our Universe.

"This is a great opportunity to help create a vibrant long-term future for astronomy and science" says Tim de Zeeuw (Leiden Observatory, The Netherlands) who led this community-wide effort.

The ASTRONET Science Vision provides a comprehensive overview of the most important scientific questions that European astronomy should address in the next twenty years. The four key questions are the extremes of the Universe, from the nature of the dark matter and dark energy that comprise over 95% of the Universe to the physics of extreme objects such as black holes, neutron stars, and gamma-ray bursts; the formation of galaxies from the first seeds to our Milky Way; the formation of stars and planets and the origin of life; and the crucial question of how do we (and our Solar System) fit in the global picture. These themes reach well beyond the realm of traditional astronomy into the frontiers of physics and biology.

The Vision identifies the major new facilities that will be needed to achieve these goals, but also stresses the need for parallel developments in theory and numerical simulations, high-performance computing resources, efficient astronomical data archiving and the European Virtual Observatory, as well as in laboratory astrophysics.

"This report is a key input for the even more challenging task of developing a prioritised, community-based Infrastructure Roadmap, crucial to keep Europe at the forefront of astronomical research," says de Zeeuw.

European astronomy today is fully competitive on the global scene and is at the forefront in many domains with such breakthroughs as the first detection of a planet around a sun-like star, the successful landing on Titan, the proof that a massive black hole exists in the centre of our own Galaxy, the discovery of gravitational arcs around galaxy clusters, and the proof that most Gamma Ray Bursts are caused by huge exploding stars. The rise of European astronomy to this top position by the end of last century has been achieved through extensive cooperation and coordination of efforts, in particular through ESO for optical astronomy and ESA for space astronomy.

To strengthen this position and to extend it to all branches of astronomy and all nations of the new Europe, a group of European funding agencies set up the ASTRONET programme with the goal to establish a comprehensive long-term development plan of European astronomy. ASTRONET therefore covers all astrophysical domains from cosmology to the Solar system, and every observing window, from space and from the ground, and from electromagnetic radiation to particles and gravitational waves. It addresses the whole astronomical 'food chain' from infrastructure and technology development to observation, data access, modelling and theory, and the human resources needed to make it all work.

This effort is quite similar in scope to the 'decadal surveys' conducted in the USA over the last half-century, but unlike its American counterpart, ASTRONET was set up directly by the national funding agencies, with strong support from the European Commission.

"A shared long-term Science Vision for European astronomy is the fundamental first step in the process, soon to be followed by a detailed infrastructure and technology development roadmap," says Johannes Andersen (NOTSA, Denmark), the ASTRONET Board Chair. "Both will be updated regularly as scientific and/or technological breakthroughs materialize."

The first stepping stone is the Science Vision document released today. This is the result of intense work by thematic panels drawn from the community, with detailed mid-term feedback from the community at large through a web forum and an open Symposium that took place earlier this year in Poitiers, France, and in which 228 scientists from 31 countries participated.

Preparation of the detailed Infrastructure Roadmap has already begun. Getting the community to agree on a common set of priorities, hard choices, and delicate balances will be a tough task, but, adds de Zeeuw, "If we don't hang together, we will surely hang separately!"

(2) The overall Science Vision programme was managed by ESO & NWO, with the scientific effort led by T. de Zeeuw of Leiden Observatory and F. Molster of NWO. The ongoing infrastructure road-mapping is conducted by M. Bode of John Moores University, Liverpool (United Kingdom).

As befitted such a pan-European exercise, this Press release is launched jointly by the various ASTRONET participants. Contacts for the media are listed on a separate page.

As befitted such a pan-European exercise, this Press release is launched jointly by the various ASTRONET participants. Contacts for the media are listed on a separate page. 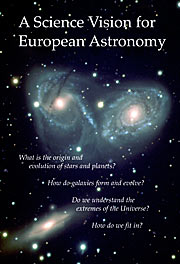 PR Image eso0744a
Cover page of the Science Vision
Send us your comments!
Subscribe to receive news from ESO in your language
Accelerated by CDN77
Terms & Conditions