Star formation is one of the most basic phenomena in the Universe. Inside stars, primordial material from the Big Bang is processed into heavier elements that we observe today. In the extended atmospheres of certain types of stars, these elements combine into more complex systems like molecules and dust grains, the building blocks for new planets, stars and galaxies and, ultimately, for life. Violent star-forming processes let otherwise dull galaxies shine in the darkness of deep space and make them visible to us over large distances.

Star formation begins with the collapse of the densest parts of interstellar clouds, regions that are characterized by comparatively high concentration of molecular gas and dust like the Orion complex and the Galactic Centre region. Since this gas and dust are products of earlier star formation, there must have been an early epoch when they did not yet exist.

But how did the first stars then form? Indeed, to describe and explain "primordial star formation" - without molecular gas and dust - is a major challenge in modern Astrophysics.

A particular class of relatively small galaxies, known as "Blue Dwarf Galaxies", possibly provide nearby and contemporary examples of what may have occurred in the early Universe during the formation of the first stars. These galaxies are poor in dust and heavier elements. They contain interstellar clouds which, in some cases, appear to be quite similar to those primordial clouds from which the first stars were formed. And yet, despite the relative lack of the dust and molecular gas that form the basic ingredients for star formation as we know it from the Milky Way, those Blue Dwarf Galaxies sometimes harbour very active star-forming regions. Thus, by studying those areas, we may hope to better understand the star-forming processes in the early Universe.

NGC 5253 is one of the nearest of the known Blue Dwarf Galaxies; it is located at a distance of about 11 million light-years in the direction of the southern constellation Centaurus. Some time ago a group of European astronomers [1] decided to take a closer look at this object and to study star-forming processes in the primordial-like environment of this galaxy.

True, NGC 5253 does contains some dust and heavier elements, but significantly less than our own Milky Way galaxy. However, it is quite extreme as a site of intense star formation, a profuse "starburst galaxy" in astronomical terminology, and a prime object for detailed studies of large-scale star formation.

The first image provides an impressive view of NGC 5253. This composite image is based on a near-infrared exposure obtained with the multi-mode ISAAC instrument mounted on the 8.2-m VLT Antu telescope at the ESO Paranal Observatory (Chile), as well as two images in the optical waveband obtained from the Hubble Space Telescope data archive (located at ESO Garching). The VLT image (in the K-band at wavelength 2.16 μm) is coded red, the HST images are blue (V-band at 0.55 μm) and green (I-band at 0.79 μm), respectively.

The enormous light-gathering capability and the fine optical quality of the VLT made it possible to obtain the very detailed near-infrared image (cf. ESO Press Photo eso0434b) during an exposure lasting only 5 min. The excellent atmospheric conditions of Paranal at the time of the observation (seeing 0.4 arcsec) allow the combination of space- and ground-based data into a colour photo of this interesting object.

A major dust lane is visible at the western (right) side of the galaxy, but patches of dust are visible all over, together with a large number of colourful stars and stellar clusters. The different colour shades are indicative of the ages of the objects and the degree of obscuration by interstellar dust. The near-infrared VLT image penetrates the dust clouds much better than the optical HST images, and some deeply embedded objects that are not detected in the optical therefore appear as red in the combined image.

Measuring the size and infrared brightness of each of these "hidden" objects, the astronomers were able to distinguish stars from stellar clusters; they count no less than 115 clusters. It was also possible to derive their ages - about 50 of them are very young in astronomical terms, less than 20 million years. The distribution of the masses of the cluster stars ressembles that observed in clusters in other starburst galaxies, but the large number of young clusters and stars is extraordinary in a galaxy as small as NGC 5253.

When images are obtained of NGC 5253 at progressively longer wavelengths like the third image, which was taken with the VLT in the L-band (wavelength 3.7 μm), the galaxy looks quite different. It no longer displays the richness of sources seen in the K-band image and is now dominated by a single bright object. By means of a large number of observations in different wavelength regions, from the optical to the radio, the astronomers find that this single object emits as much energy in the infrared part of the spectrum as does the entire galaxy in the optical region. The amount of energy radiated at different wavelengths shows that it is a young (a few million years), very massive (more than one million solar masses) stellar cluster, embedded in a dense and heavy dust cloud (more than 100,000 solar masses of dust; the emission seen in ESO Press Photo eso0434c comes from this dust).

A view towards the beginnings

These results show that a galaxy as tiny as NGC 5253, almost 100 times smaller than our own Milky Way galaxy, can produce hundreds of compact stellar clusters. The youngest of these clusters are still deeply embedded in their natal clouds, but when observed with infrared-sensitive instruments like ISAAC at the VLT, they stand out as very bright objects indeed.

The most massive of these clusters holds about one million solar masses and shines as much as 5000 very bright massive stars. It may well be very similar to the progenitors in the early Universe of the old globular clusters we now observe in large galaxies like the Milky Way. In this sense, NGC 5253 provides us with a direct view towards our own beginnings.

[1] The group consists of Giovanni Cresci (University of Florence, Italy), Leonardo Vanzi (ESO-Chile) and Marc Sauvage (CEA/DSN/DAPNIA, Saclay, France). More details about the present investigation is available in a research paper ("The Star Cluster population of NGC 5253" by G. Cresci et al.) to appear soon in the leading research journal Astronomy & Astrophysics (a preprint is available as astro-ph/0411486). 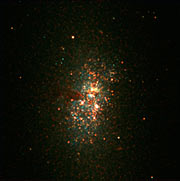 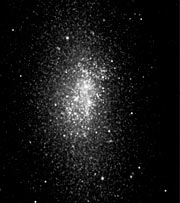 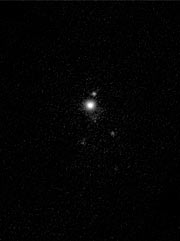