Massive Star Observed that Forms through a Rotating Accretion Disc.

Based on a large observational effort with different telescopes and instruments, mostly from the European Southern Observatory (ESO), a team of European astronomers [1] has shown that in the M 17 nebula a high mass star [2] forms via accretion through a circumstellar disc, i.e. through the same channel as low-mass stars. To reach this conclusion, the astronomers used very sensitive infrared instruments to penetrate the south-western molecular cloud of M 17 so that faint emission from gas heated up by a cluster of massive stars, partly located behind the molecular cloud, could be detected through the dust. Against the background of this hot region a large opaque silhouette, which resembles a flared disc seen nearly edge-on, is found to be associated with an hour-glass shaped reflection nebula. This system complies perfectly with a newly forming high-mass star surrounded by a huge accretion disc and accompanied by an energetic bipolar mass outflow. The new observations corroborate recent theoretical calculations which claim that stars up to 40 times more massive than the Sun can be formed by the same processes that are active during the formation of stars of smaller masses.

While many details related to the formation and early evolution of low-mass stars like the Sun are now well understood, the basic scenario that leads to the formation of high-mass stars [2] still remains a mystery. Two possible scenarios for the formation of massive stars are currently being studied. In the first, such stars form by accretion of large amounts of circumstellar material; the infall onto the nascent star varies with time. Another possibility is formation by collision (coalescence) of protostars of intermediate masses, increasing the stellar mass in "jumps".

In their continuing quest to add more pieces to the puzzle and help providing an answer to this fundamental question, a team of European astronomers [1] used a battery of telescopes,

mostly at two of the European Southern Observatory's Chilean sites of La Silla and Paranal, to study in unsurpassed detail the Omega nebula.

The Omega nebula, also known as the 17th object in the list of famous French astronomer Charles Messier, i.e. Messier 17 or M 17, is one of the most prominent star forming regions in our Galaxy. It is located at a distance of 7,000 light-years.

M 17 is extremely young - in astronomical terms - as witnessed by the presence of a cluster of high-mass stars that ionise the surrounding hydrogen gas and create a so-called H II region. The total luminosity of these stars exceeds that of our Sun by almost a factor of ten million.

Adjacent to the south-western edge of the H II region, there is a huge cloud of molecular gas which is believed to be a site of ongoing star formation. In order to search for newly forming high-mass stars, Rolf Chini of the Ruhr-Universität Bochum (Germany) and his collaborators have recently investigated the interface between the H II region and the molecular cloud by means of very deep optical and infrared imaging between 0.4 and 2.2 µm.

Rolf Chini is pleased: "Our measurements are so sensitive that the south-western molecular cloud of M 17 is penetrated and the faint nebular emission of the H II region, which is partly located behind the molecular cloud, could be detected through the dust."

Against the nebular background of the H II region a large opaque silhouette is seen associated with an hourglass shaped reflection nebula.

To obtain a better view of the structure, the team of astronomers turned then to Adaptive Optics imaging using the NAOS-CONICA instrument on the VLT.

Adaptive optics is a "wonder-weapon" in ground-based astronomy, allowing astronomers to "neutralize" the image-smearing turbulence of the terrestrial atmosphere (seen by the unaided eye as the twinkling of stars) so that much sharper images can be obtained. With NAOS-CONICA on the VLT, the astronomers were able to obtain images with a resolution better than one tenth of the "seeing", that is, as what they could observe with ISAAC.

The disc has a diameter of about 20,000 AU [3] - which is 500 times the distance of the farthest planet in our solar system - and is by far the largest circumstellar disc ever detected.

To study the disc structure and properties, the astronomers then turned to radio astronomy and carried out molecular line spectroscopy at the IRAM Plateau de Bure interferometer near Grenoble (France) in April 2003. The astronomers have observed the region in the rotational transitions of the 12CO, 13CO and C18O molecules, and in the adjacent continuum at 3 mm. Velocity resolutions of 0.1 and 0.2 km/s, respectively, were achieved.

Dieter Nürnberger, member of the team, sees this as a confirmation: "Our 13CO data obtained with IRAM indicate that the disc/envelope system slowly rotates with its north-western part approaching the observer." Over an extent of 30,800 AU a velocity shift of 1.7 km/s is indeed measured (eso0416d).

From these observations, adopting standard values for the abundance ratio between the different isotopic carbon monoxide molecules (12CO and 13CO) and for the conversion factor to derive molecular hydrogen densities from the mesured CO intensities, the astronomers were also able to derive a conservative lower limit for the disc mass of 110 solar masses.

This is by far the most massive and largest accretion disc ever observed directly around a young massive star. The largest silhouette disc so far is known as 114-426 in Orion and has a diameter of about 1,000 AU; however, its central star is likely a low-mass object rather than a massive protostar. Although there are a small number of candidates for massive young stellar objects (YSOs) some of which are associated with outflows, the largest circumstellar disc hitherto detected around these objects has a diameter of only 130 AU.

The second morphological structure that is visible on all images throughout the entire spectral range from visible to infrared (0.4 to 2.2 µm) is an hourglass-shaped nebula perpendicular to the plane of the disc (ESO Press Photo eso0416).

This is believed to be an energetic outflow coming from the central massive object. To confirm this, the astronomers went back to ESO's telescopes to perform spectroscopic observations. The optical spectra of the bipolar outflow were measured in April/June 2003 with EFOSC2 at the ESO 3.6 m telescope and with EMMI at the ESO 3.5 m NTT, both located on La Silla, Chile.

The observed spectrum (ESO Press Photo eso0416) is dominated by the emission lines of hydrogen (Hα), calcium (the Ca II triplet 849.8, 854.2 and 866.2 nm), and helium (He I 667.8 nm). In the case of low-mass stars, these lines provide indirect evidence for ongoing accretion from the inner disc onto the star.

The Ca II triplet was also shown to be a product of disc accretion for both a large sample of low and intermediate-mass protostars, known as T Tauri and Herbig Ae/Be stars, respectively. Moreover, the Hα line is extremely broad and shows a deep blue-shifted absorption typically associated with accretion disc-driven outflows.

In the spectrum, numerous iron (Fe II) lines were also observed, which are velocity-shifted by ± 120 km/s. This is clear evidence for the existence of shocks with velocities of more than 50 km/s, hence another confirmation of the outflow hypothesis.

Due to heavy extinction, the nature of an accreting protostellar object, i.e. a star in the process of formation, is usually difficult to infer. Accessible are only those that are located in the neighbourhood of their elder brethren, e.g. next to a cluster of hot stars. Such already evolved massive stars are a rich source of energetic photons and produce powerful stellar winds of protons (like the "solar wind" but much stronger) which impact on the surrounding interstellar gas and dust clouds. This process may lead to partial evaporation and dispersion of those clouds, thereby "lifting the curtain" and allowing us to look directly at young stars in that region.

However, for all high-mass protostellar candidates located away from such a hostile environment there is not a single direct evidence for a (proto-)stellar central object; likewise, the origin of the luminosity - typically about ten thousand solar luminosities - is unclear and may be due to multiple objects or even embedded clusters.

The new disc in M 17 is the only system which exhibits a central object at the expected position of the forming star. The 2.2 µm emission is relatively compact (240 AU x 450 AU) - too small to host a cluster of stars.

Assuming that the emission is due solely to the star, the astronomers derive an absolute infrared brightness of about K = -2.5 magnitudes which would correspond to a main sequence star of about 20 solar masses. Given the fact that the accretion process is still active, and that models predict that about 30-50% of the circumstellar material can be accumulated onto the central object, it is likely that in the present case a massive protostar is currently being born.

Theoretical calculations show that an initial gas cloud of 60 to 120 solar masses may evolve into a star of approximately 30-40 solar masses while the remaining mass is rejected into the interstellar medium. The present observations may be the first to show this happening.

The research described in this press release is published in the research journal Nature ("The Formation of a Massive Protostar through Disk Accretion of Gas" by Rolf Chini, Vera Hoffmeister, Stefan Kimeswenger, Markus Nielbock, Dieter Nürnberger, Linda Schmidtobreick & Michael Sterzik). 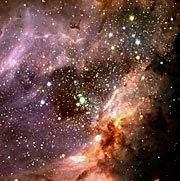 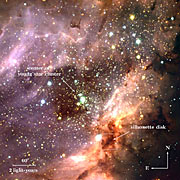 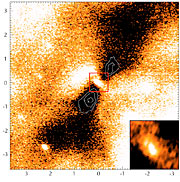 PR Video eso0416a
The M 17 region
Send us your comments!
Subscribe to receive news from ESO in your language
Accelerated by CDN77
Terms & Conditions