Don't worry - you are not the only one who thought this was a nice amateur photo of planet Saturn, Lord of the Rings in our Solar System! But then the relative brightness and positions of the moons may appear somewhat unfamiliar... and the ring system does look unusually bright when compared to the planetary disk...?? Well, it is not Saturn, but Uranus , the next giant planet further out, located at a distance of about 3,000 million km, or 20 times the distance between the Sun and the Earth.

The photo shows Uranus surrounded by its rings and some of the moons, as they appear on a near-infrared image that was obtained in the K s -band (at wavelength 2.2 µm) with the ISAAC multi-mode instrument on the 8.2-m VLT ANTU telescope at the ESO Paranal Observatory (Chile). The exposure was made on November 19, 2002 (03:00 hrs UT) during a planetary research programme. The observing conditions were excellent (seeing 0.5 arcsec) and the exposure lasted 5 min. The angular diameter of Uranus is about 3.5 arcsec.

The observers at ISAAC were Emmanuel Lellouch and Thérése Encrenaz of the Observatoire de Paris (France) and Jean-Gabriel Cuby and Andreas Jaunsen (both ESO-Chile).

The rings of Uranus were discovered in 1977, from observations during a stellar occultation event by astronomer teams at the Kuiper Airborne Observatory (KAO) and the Perth Observatory (Australia). Just before and after the planet moved in front of the (occulted) star, the surrounding rings caused the starlight to dim for short intervals of time. Photos obtained from the Voyager-2 spacecraft in 1986 showed a multitude of very tenuous rings. These rings are almost undetectable from the Earth in visible light.

However, on the present VLT near-infrared picture, the contrast between the rings and the planet is strongly enhanced. At the particular wavelength at which this observation was made, the infalling sunlight is almost completely absorbed by gaseous methane present in the planetary atmosphere and the disk of Uranus therefore appears unsually dark. At the same time, the icy material in the rings reflects the sunlight and appears comparatively bright.

Uranus is unique among the planets of the solar system in having a tilted rotation axis that is close to the main solar system plane in which most planets move (the "Ecliptic"). At the time of the Voyager-2 encounter (1986), the southern pole was oriented toward the Earth. Now, sixteen years later (corresponding to about one-fifth of Uranus' 84-year period of revolution), we observe the Uranian ring system at an angle that is comparable to the one under which we see Saturn when its ring system is most "open".

The much smaller and fainter Puck and Portia (visual magnitude about 21 and barely visible in the photo) were first found in 1985-86 by Stephen P. Synnott of the Jet Propulsion Laboratory (USA), during a study of Voyager-2 photos obtained soon before this NASA spacecraft flew by Uranus in January 1986.

If you now want to see a fine VLT photo of Saturn, please look at ESO Press Photo eso0204a, obtained in late 2001. It was made with the NAOS-CONICA (NACO) Adaptive Optics facility and is therefore much less influenced by atmospheric turbulence and hence correspondingly sharper than the present ISAAC image of Uranus.

[1] Historic information about the discovery of Uranus' moons is available at the History of Astronomy website. There is also a very useful list of planet and satellite names and discoverers at the IAU Gazetteer of Planetary Nomenclature website.

Historic information about the discovery of Uranus' moons is available at the History of Astronomy website: http://www.astro.uni-bonn.de/~pbrosche/astoria.html 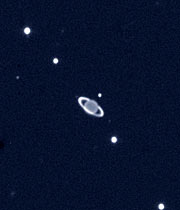 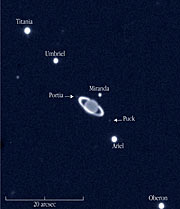 PR Image eso0237b
Uranus with rings and moons
Send us your comments!
Subscribe to receive news from ESO in your language
Accelerated by CDN77
Terms & Conditions