New images of Comet Wirtanen's 1-km 'dirty snowball' nucleus have been obtained with the ESO Very Large Telescope at Paranal (Chile). They show this object at a distance of approx. 435 million km from the Sun, about the same as when the Rosetta spacecraft of the European Space Agency (ESA) arrives in 2011. The new observations indicate that the comet has a very low degree of activity at this point in its orbit - almost no material is seen around the nucleus. This means that there will not be so much dust near the nucleus as to make the planned landing dramatically difficult.

Chase a fast-moving comet, land on it and 'ride' it while it speeds up towards the Sun: not the script of a science-fiction movie, but the very real task of ESA's Rosetta spacecraft. New observations with the ESO Very Large Telescope (VLT) provide vital information about Comet Wirtanen - Rosetta's target - to help ESA reduce uncertainties in the mission, one of the most difficult ever to be performed.

Every 5.5 years Comet Wirtanen completes an orbit around the Sun. Wirtanen has been seen during several apparitions since its discovery in 1948, but only recently have astronomers obtained detailed observations that have allowed them to estimate the comet's size and behaviour.

Rosetta will be launched next year and it will reach Comet Wirtanen in 2011. By that time the comet will be nearly as far from the Sun as Jupiter, charging headlong towards the inner Solar System at speeds of up to 135,000 km/h. To get there and to be able to match the comet's orbit, Rosetta will need to be accelerated by several planetary swing-bys, after which the spacecraft - following a series of difficult manoeuvres - will get close to the comet, enter into orbit around it and release a lander from a height of about 1 km.

The VLT observations were planned specifically to investigate the 'activity' of Wirtanen at about the same solar distance as at the time of the landing manoeuvres . Because of this timing requirement, they had to be carried out at a certain moment - unfortunately, when the comet was low in the twilight evening sky and descending rapidly towards the western horizon. However, even though the exposures therefore had to be quite short, the VLT with its superb light-gathering capability and opto-mechanical perfection was still able to produce excellent images of this rather faint, moving object (about 6 million times fainter than what can be perceived with the unaided eye).

These observations have now confirmed that - at the same distance from the Sun at which the landing will take place (about 450 million km from the Sun) - the activity on Wirtanen is very low, cf. ESO Press Photo eso0206a.

This is very good news for the mission, because it means that there will not be so much dust near the nucleus as to make the landing dramatically difficult .

Landing on a 1-km snowball

Cometary nuclei are small frozen bodies made of ice and dust ('dirty snowballs'). When they get close to the Sun the heat causes ices on the surface to 'evaporate'. Gas and dust grains are ejected into the surrounding space forming the comet's atmosphere (coma) and the tail.

In addition to dropping a lander on Wirtanen's nucleus for detailed in-situ observations, Rosetta's task is to investigate the evolution of the comet on its way to the Sun: in fact, Rosetta will keep orbiting around Wirtanen up to the end of the mission in July 2013, at which time the comet is at its closest approach to the Sun, at about 160 million km from it.

These and earlier VLT observations have also provided Rosetta mission planners with an accurate measurement of their target's size: Wirtanen's nucleus is only 1.2 km in diameter, a true cosmic bullet .

"Rosetta is certainly a very challenging space mission. No one has ever tried to land on a comet before," says Gerhard Schwehm, Rosetta's Project Scientist. "We need to learn as much as possible about our target. The new VLT data will allow us to improve our models and make decisions once we get there."

"It is a pleasure to help our colleagues at ESA", says ESO astronomer and comet specialist Hermann Boehnhardt . "We will continue to keep an eye on this comet, in particular when Rosetta is approaching its target. We can then provide the spacecraft controllers and the astronomers with very useful, regular updates, e.g., about the 'cometary weather' at the time of arrival."

[1]: This is a joint Press Release by ESO and ESA. The ESA release is available at this website.

Rosetta's prime scientific goal is to unravel the origin of the Solar System. The chemical composition of comets is known to reflect that of the primordial nebula that gave birth to the Solar System - in the planets, that primeval material has gone through complex processing, but not in the comets. Therefore, Rosetta will allow scientists to look back 4.6 billion years, to an epoch when the Solar System formed.

Previous studies by ESA's Giotto spacecraft and by ground-based observatories have shown that comets contain complex organic molecules - compounds that are rich in carbon, hydrogen, oxygen and nitrogen. Intriguingly, these are the elements which make up nucleic acids and amino acids, essential ingredients for life as we know it. Did life on Earth begin with the help of comet seeding? Rosetta may help us to find the answer to this fundamental question.

Rosetta carries 21 experiments in total. These are provided by scientific consortia from institutes across Europe and the United States.

The Wirtanen observations by the VLT fall into a tradition of fruitful collaboration between the European Space Agency (ESA) and the European Southern Observatory (ESO). The two organizations, both members of the EIROFORUM collaboration (eso0112), are already combining their efforts in several strategic areas, in order to facilitate the synergy between space and ground facilities, where mutual sharing of technology and procedures can result in substantial gains and savings. 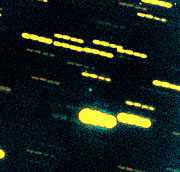 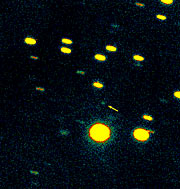 PR Image eso0206b
Comet Wirtanen
Send us your comments!
Subscribe to receive news from ESO in your language
Accelerated by CDN77
Terms & Conditions