An Infrared Portrait of the Barred Spiral Galaxy Messier 83

Messier 83 (M83) is a relatively nearby spiral galaxy with a pronounced bar-like structure. It is located in the southern constellation Hydra (The Water-Snake) and is also known as NGC 5236; the distance is approximately 12 million light-years. Images of M83 obtained in visible light - like the VLT photo published exactly two years ago - show clumpy, well-defined spiral arms that are rich in young stars while the disk reveals a complex system of intricate dust lanes. This galaxy is known to be a site of vigorous star formation and no less than six supernovae (exploding stars) have been observed in M83 during the past century. It is a fairly symmetrical object and possesses no nearby companions.

Investigations of gas motions in the nucleus and in the main disk play a key role in understanding the structure and evolution of barred spiral galaxies like M83. Inflow of gas towards the center caused by a mass distribution that is not circularly symmetric is often invoked to explain certain observed phenomena, e.g., the feeding of Active Galactic Nuclei (AGNs, see also the report about recent observations in three such galaxies in eso0118), and the fueling of bursts of star formation in the nuclear region. Some astronomers think that this process may cause a change of a galaxy's (morphological) type, for instance from barred to normal spiral galaxy.

It has also been suggested that the development of spiral structures in galactic disks may be due to central stellar bars. Interstellar gas that is subject to periodical perturbations by the non-circularly symmetrical gravitational field in a barred system will develop a "density wave" that attracts neighbouring stars and gas. The local density increases and once a certain ("critical") value is reached, star formation is "ignited" in this area.

In order to better understand phenomena like these, it is essential to know in detail the distribution of matter in the galaxy disk. This is best done by means of infrared observations.

Images obtained in the optical region of the spectrum mainly trace the pattern of star formation as well as young and bright stars, rather than the mass distribution in the galaxy. The regions with much dust are also well visible on such images as dark lanes and clouds, since they are very opaque to visible light. However, on infrared images, the dust absorption is much smaller and the light that is recorded mainly comes from old giant stars. Although those stars contribute little to the mass, they have the same spatial distribution as the much more numerous, smaller ("main sequence") stars. Their distribution therefore shows the mass distribution in the galaxy and hence the gravitation field that directs the motions of the interstellar gas.

It is for this reason that infrared images of barred galaxies, like the ones of M83 shown here that was prepared by a group of Swedish astronomers [1], are extremely useful for the study of the dynamics of such galaxies and their development.

In order to produce these (false-) colour photos, three infrared images of M83 obtained in the Ks- (wavelength 2.2 µm), J- (1.2 µm) and I-bands (0.8 µm), respectively, were combined into one colour image. The field shown in ESO Press Photo eso0136a measures 32,000 light-years across at the distance of M83. The dust lanes appear red since the emission in the longest waveband (Ks) is able to penetrate the dense gas and dust clouds. Note also how the dust lanes follow the leading edge of the bar - assuming that the arms are trailing and that the upper right area is the side of the galaxy that is nearest to us.

ESO Press Photo eso0136b is an enlarged view of the galactic nucleus, processed to better show the intricate structure in this area. Here the dust lanes merge into a nuclear ring. It is obvious that the dust absorption in this region is so high that even Ks-photons have a hard time passing through.

[1] The group includes Andreas Andersson and Hans Olofsson (Stockholm Observatory, SCFAB), and Tommy Wiklind and Gustaf Rydbeck (Onsala Space Observatory). The group is grateful to Søren Larsen for the use of an I-image for the present work. 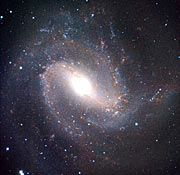 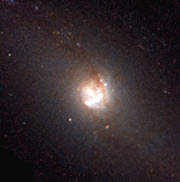 PR Image eso0136b
An infrared portrait of the barred spiral galaxy Messier 83
Send us your comments!
Subscribe to receive news from ESO in your language
Accelerated by CDN77
Terms & Conditions