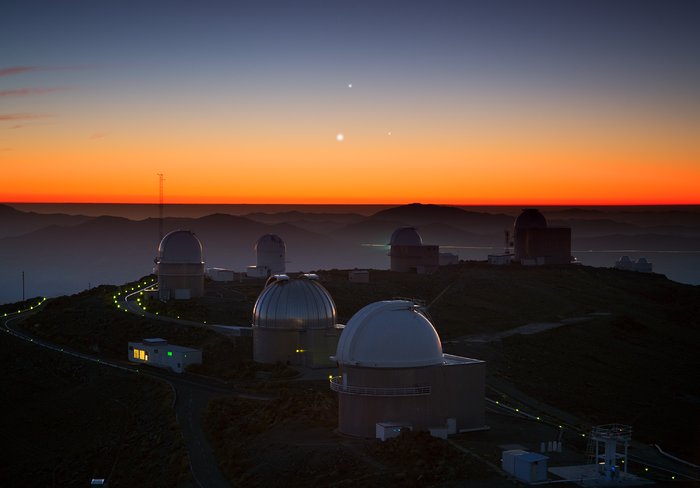 It’s a real treat for photographers and astronomers alike: our skies are currently witnessing a phenomenon known as a syzygy — when three celestial bodies (or more) nearly align themselves in the sky. When celestial bodies have similar ecliptic longitude, this event is also known as a triple near-conjunction. Of course, this is just a trick of perspective, but this doesn't make it any less spectacular. In this case, these bodies are three planets, and the only thing needed to enjoy the show is a clear view of the sky at sunset.

Luckily, this is what happened for ESO photo ambassador Yuri Beletsky, who had the chance to spot this spectacular view from ESO's La Silla Observatory in northern Chile on Sunday 26 May. Above the round domes of the telescopes, three of the planets in our Solar System — Jupiter (top), Venus (lower left), and Mercury (lower right) — were revealed after sunset, engaged in their cosmic dance.

An alignment like this happens only once every few years. The last one took place in May 2011, and the next one will not be until October 2015. This celestial triangle was at its best over the last week of May, but you may still be able to catch a glimpse of the three planets as they form ever-changing arrangements during their journey across the sky.