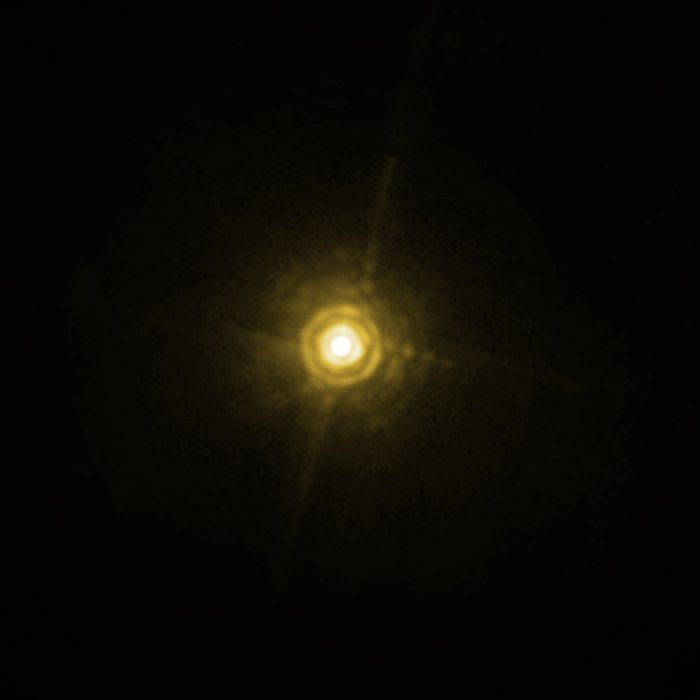 The bright and very young star HR 8799, about 130 light-years away from Earth, hosts a planetary system that looks like a scaled-up model of our own Solar System. Three giant planetary companions have been detected so far, with masses between 7 and 10 times that of Jupiter and being between 20 and 70 times as far from their host star than the Earth is from the Sun ; the system also includes two belts of smaller objects, similar to our asteroid and Kuiper belts. This NACO image shows the star and the middle planet (marked), of which the astronomers were able, after more than five hours of exposure time, to tease out the planet’s spectrum from the host star’s much brighter light. This is the first time the spectrum of an exoplanet orbiting a normal, almost Sun-like star has been obtained directly. According to the scientists it is like trying to see what a candle is made of, by observing it from a distance of two kilometres when it’s next to a blindingly bright 300 Watt lamp. Despite the power of the VLT’s extraordinary adaptive optics system, the spectrum of the planet appears very faint, but still contains enough information for the astronomers to characterise the object. The image of the star suffers from several diffraction artefacts, which should not be confused with the real signal of the exoplanet.