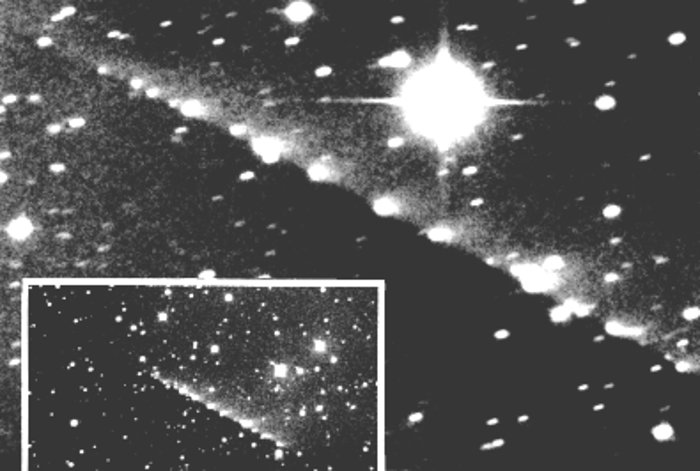 These two photos from the ESO La Silla observatory show the individual nuclei of comet Shoemaker-Levy 9, now headed for collision with Jupiter on 16 - 22 July 1994.

The wide-field photo (below, left) was obtained by Klaus Jockers and Galina Chernova (Max-Planck-Institute fur Aeronomie, Katlenburg, Lindau, Germany) on May 1, 1994. For this 5 min exposure in red light they used a CCD camera at the MPIfAe/Hoher List focal reducer at the ESO 1-metre telescope. The entire nuclear train (the "string of pearls") is very well seen, together with the sunlight-reflecting dust from the nuclei, all on one side. On this date, the comet was 654 million km from the Earth and the angular extension of the train was about 5.3 arcmin, corresponding to a projected length of just over 1 million km.

A 15 min CCD image was obtained for astrometric purposes on May 11, 1994, by Jean-Francois Claeskens at the Danish 1.5 m telescope at La Silla; it is here reproduced in close-up to show well the individual nuclei, in particular the fainter ones. The bright object to the upper right is a 10th mag star. Note that the stars in the field are somewhat trailed, since the telescope was set to follow the motion of the comet. The first nucleus to hit Jupiter will be "A", here seen 42 mm from the left edge and 33 mm below the upper edge of the large picture. The last is "W", 43 mm above the lower edge and 9 mm from the right edge. The comet was 657 million km from the Earth and the train was somewhat longer, 5.8 arcmin i.e. the projected length was now 1.1 million km.