Life is not easy, even for galaxies. Some indeed get so close to their neighbours that they get rather distorted. But such encounters between galaxies have another effect: they spawn new generations of stars, some of which explode. ESO's VLT has obtained a unique vista of a pair of entangled galaxies, in which a star exploded.

Because of the importance of exploding stars, and particularly of supernovae of Type Ia [1], for cosmological studies (e.g. relating to claims of an accelerated cosmic expansion and the existence of a new, unknown, constituent of the universe - the so called 'Dark Energy'), they are a preferred target of study for astronomers. Thus, on several occasions, they pointed ESO's Very Large Telescope (VLT) towards a region of the sky that portrays a trio of amazing galaxies.

MCG-01-39-003 (bottom right) is a peculiar spiral galaxy, with a telephone number name, that presents a hook at one side, most probably due to the interaction with its neighbour, the spiral galaxy NGC 5917 (upper right). In fact, further enhancement of the image reveals that matter is pulled off MCG-01-39-003 by NGC 5917. Both these galaxies are located at similar distances, about 87 million light-years away, towards the constellation of Libra (The Balance).

As seen at the bottom left of this exceptional VLT image, a still fainter and nameless, but intricately beautiful, barred spiral galaxy looks from a distance the entangled pair, while many 'island universes' perform a cosmic dance in the background.

But this is not the reason why astronomers look at this region. Last year, a star exploded in the vicinity of the hook. The supernova, noted SN 2005cf as it was the 84th found that year, was discovered by astronomers Pugh and Li with the robotic KAIT telescope on 28 May. It appeared to be projected on top of a bridge of matter connecting MCG-01-39-003 with NGC5917. Further analysis with the Whipple Observatory 1.5m Telescope showed this supernova to be of the Ia type and that the material was ejected with velocities up to 15 000 km/s (that is, 54 million kilometres per hour!).

Immediately after the discovery, the European Supernova Collaboration (ESC [2]), led by Wolfgang Hillebrandt (MPA-Garching, Germany) started an extensive observing campaign on this object, using a large number of telescopes around the world.

There have been several indications about the fact that galaxy encounters and/or galaxy activity phenomena may produce enhanced star formation. As a consequence, the number of supernovae in this kind of system is expected to be larger with respect to isolated galaxies. Normally, this scenario should favour mainly the explosion of young, massive stars. Nevertheless, recent studies have shown that such phenomena could increase the number of stars that eventually explode as Type Ia supernovae. This notwithstanding, the discovery of supernovae in tidal tails connecting interacting galaxies remains quite an exceptional event. For this reason, the discovery of SN2005cf close to the 'tidal bridge' between MCG-01-39-002 and MCG-01-39-003 constitutes a very interesting case.

The supernova was followed by the ESC team during its whole evolution, from about ten days before the object reached its peak luminosity until more than a year after the explosion. As the SN becomes fainter and fainter, larger and larger telescopes are needed. One year after the explosion, the object is indeed about 700 times fainter than at maximum.

The supernova was observed with the VLT equipped with FORS1 by ESO astronomer Ferdinando Patat, who is also member of the team led by Massimo Turatto (INAF-Padua, Italy), and at a latter stage by the Paranal Science Team, with the aim of studying the very late phases of the supernova. These late stages are very important to probe the inner parts of the ejected material, in order to better understand the explosion mechanism and the elements produced during the explosion.

The deep FORS1 images reveal a beautiful tidal structure in the form of a hook, with a wealth of details that probably include regions of star formation triggered by the close encounter between the two galaxies.

"Curiously, the supernova appears to be outside of the tidal tail", says Ferdinando Patat. "The progenitor system was probably stripped out of one of the two galaxies and exploded far away from the place where it was born."

Life may not be easy for galaxies, but it isn't much simpler for stars either.

[1]: Type Ia supernovae are a sub-class of supernovae that were historically classified as not showing the signature of hydrogen in their spectra. They are currently interpreted as the disruption of small, compact stars, called white dwarfs, that acquire matter from a companion star.

[2]: The European Supernova Collaboration includes 10 institutions across Europe (Stockholm, MPA, Barcelona, CNRS, ESO, ICSTM, ING, IoA, Padua, Oxford) and most of the observational and theoretical expertise on supernovae in Europe.

Technical information: ESO Press Photo eso0622 is a composite image based on data acquired with the FORS1 multi-mode instrument in April and May 2006 for the European Supernova Collaboration. The observations were made in four different filters (B, V, R, and I) that were combined to make a colour image. The field of view covers 5.6 x 8.3 arcmin. North is up and East is to the left. The observations were done by Ferdinando Patat and the Paranal Science team (ESO), and the final processing was done by Olivia Blanchemain, Henri Boffin and Haennes Heyer (ESO). 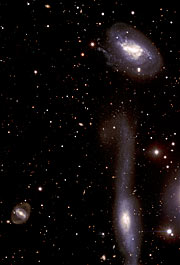 TZ Obrázek eso0622a
The hooked galaxy and its companion 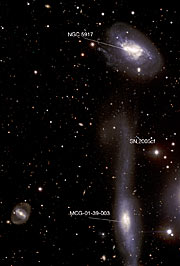