Behind the scenes at ESO: Showing you the road to the stars
What you’ll discover in this blog post:
The ESO Supernova is the gateway to space for the European public. It provides an immersive experience that leaves visitors in awe of the Universe in which they live and seemingly-abstract concepts are explained in an innovative and engaging way. But all this is futile if we don’t get the science right. We speak to ESO scientist Paola Amico about her involvement as a “Science Liaison” for the ESO Supernova.

Q. Firstly, could you tell us what being a Science Liaison for the ESO Supernova involves?

A. I check everything that is produced for scientific accuracy to make sure that people are as well informed as possible and that misconceptions are not spread. This all started in 2016, when there was a call for volunteers for the ESO Supernova, which was due to be opened to the public two years later.

I applied and Tania — the Supernova Coordinator — realised I had a background in astronomy. She checked my CV to review my experience and quickly asked me to take on the role of Science Liaison! I happily accepted and continue to do this even now. It means that I evaluate the text on everything that is produced in the Supernova; this includes exhibition panels, student workshops, planetarium shows, and even the AstroCalendar, which is a kind of database of astronomical events. At the same time, I also took on the role of Science Liaison for ESO’s Department of Communications more generally. Paola Amico checks all the text that goes onto the panels of the thirteen-section ESO Supernova exhibition.
Credit: ESO/P. Horálek

Q: What experience do you have that makes you a good Science Liaison?

A: By background I am an astronomer specialising in galactic dynamics — so how galaxies rotate, dark matter and things like that. After finishing a PhD in astronomy, I started at ESO as a Fellow in 1994, and somehow I got more and more attracted to the technology that is applied to astronomy. In particular I became fascinated by detectors, which are a bit like the eyes of any telescope.

Paola ensured the scientific accuracy of one of the ESO Supernova student workshops — Catching Starlight. The workshop involves arranging lenses and mirrors to create different telescope designs.
Credit: ESO
I think my experience in astronomy technology really gives me a broad range of knowledge in the “what”, “why” and “how” of astronomy that makes me a good fit for the Science Liaison role.

I was later offered a fellowship in ESO’s instrumentation division, and from that moment on I managed to stay in the field of technology for astronomy. I worked as an instrument scientist and support astronomer for eight years, both at Keck Observatory and at ESO’s Paranal Observatory. My instruments were almost all capable of adaptive optics, which corrects for turbulence in Earth’s atmosphere that causes stars to twinkle and blur. Telescopes that use adaptive optics are really cool, and I think even more fun than other telescopes! Somehow it requires some real-time thinking, interacting and interpretation, because the atmosphere changes all the time, making it quite human-like. I would say working on instruments with adaptive optics is now my role of expertise, I am a systems engineer and I support two instruments on ESO’s Extremely Large Telescope.

I’m very lucky, because I’m pretty old (ha!) and saw many astronomical technologies being born. The application of technology to astronomy was really starting to take off when I began working in the field. With detectors, for example, they were first one pixel, then eight, and now we are working with detectors made up of millions of pixels! It’s been a real privilege to see that happen and I think working in astronomy during this time of change has given me vital knowledge that I can apply to my Science Liaison role.

As well as explaining current science and astronomy, the ESO Supernova also presents ESO and all the incredible telescopes that we operate. For example, I was involved in developing a workshop all about optics that shows students and teachers how instruments work and what people can do even with small telescopes. I think my experience in astronomy technology really gives me a broad range of knowledge in the “what”, “why” and “how” of astronomy that makes me a good fit for the Science Liaison role.

Q: The ESO Supernova covers pretty much every topic in astronomy. Has it been difficult to review such a range of subjects?

A: It was a bit overwhelming at the beginning! Even for active astronomers it can be a challenge to know the most up-to-date research in every area. For me, this was partly why I wanted to be involved — to get back in touch with all of astronomy. And I’ve learned so much! I went through all my studies again and began recovering all this information.

The interesting thing is that when I started as an astronomer back in the eighties, the science was at a completely different stage. Since then astronomy has progressed an almost unbelievable amount and there have been so many incredible discoveries. There is so much modern science that is hugely important now that we knew little about twenty years ago; take black holes, gravitational waves, and dark energy for example. I’m so pleased to have had the opportunity to catch up on some of the things I missed — but it required a lot of hard work!

Of course, when reviewing content for the ESO Supernova, I have to check that all the numbers and facts are reported correctly, and in order to do that I cross-check and read a lot of scientific papers. It is so important that all our information is accurate, because it is our duty to inform the public. 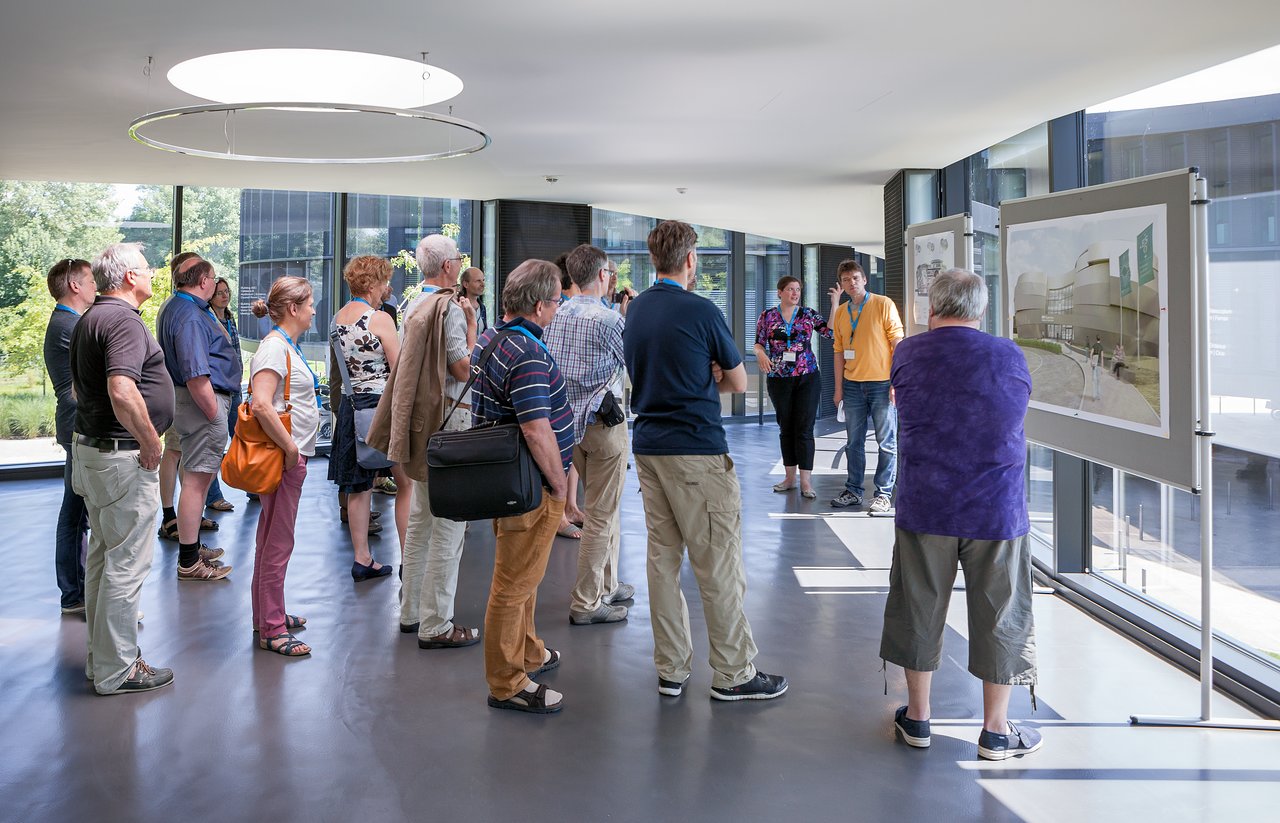 Teachers on a tour of ESO Headquarters
Credit: ESO/M. Zamani

Q: What excites you most about the ESO Supernova?

A: The reason I volunteered in the first place was to give tours to the students, in particular secondary school students, given my past as a high school maths teacher. I love interacting with them and telling them all about astronomy and science. When I first started at ESO, I volunteered with Italian kids, guiding them around the ESO Headquarters and even showing them a movie about the construction of ESO’s Very Large Telescope. This was really exciting — even watching a movie was very spectacular back then!

We always put time aside for the students to ask astronomers questions, and I just loved that. But now, with the Supernova, I am supported by a hugely impressive exhibition, making it easier to impress the public, much more than I did just with just a VHS back in 1994!

Q: What is your favourite thing about being a Science Liaison at ESO?

A: Astronomy is intrinsically wonderful, with every image being so beautiful and impressive. But I love to be able to explain that there is so much more behind the beauty, and using that to inspire young people to go into science, or just to ask big questions and think about their place in the Universe.

Science is about solving a mystery, and it’s great to give people a sense of the scientific approach — I like to encourage people to question what’s around them and maybe even to be more critical about what they might hear in the news.

With the Science Liaison work, I always think critically. I take everything I read a sentence at a time, looking at each word and asking if this is the best word to use, the best way to describe an idea. I look at everything with doubt, not because I don’t trust what someone has written, but because it helps you critically analyse what you are looking at, and make it better.

I love to be able to explain that there is so much more behind the beauty, and using that to inspire young people to go into science, or just to ask big questions and think about their place in the Universe.

After receiving a Doctorate in Astronomy from Padova University, Italy, Paola Amico started as a science fellow at ESO in 1994. Just one year later, she moved her fellowship to the Detector Group of the Instrumentation Division, kicking off a more technology-oriented career in astronomy. Paola became an ESO staff member in 1998 as Data Quality Control Scientist for the VLT instruments ISAAC and NACO. In 2001, Paola moved to Hawaii to enjoy tropical beaches and work at Keck Observatory, following her interest in adaptive optics-assisted astronomy.

It didn’t take Paola long to return to ESO. In 2005, she became Staff Astronomer at Paranal Observatory. She was instrument scientist and leader of the adaptive optics team, spending much of her time observing with ESO’s telescopes. Returning to regular daytime work in 2009, Paola took on the role of System Engineer in ESO’s Instrumentation Division. She currently works on ELT-related projects, including MAORY, MICADO and the Wavefront Sending Cameras, in addition to her role supporting the Department of Communication as Science Liaison.