Behind the scenes at ESO: Showing you the road to the stars
What you’ll discover in this blog post:
For the ultimate stargazing experience, Chile is an unmissable destination. The skies above the Atacama Desert are clear for about 300 nights per year, so this high, dry and dark environment offers the perfect window to the Universe. Hundreds of thousands of tourists flock to Chile each year to take advantage of the incredible stargazing conditions, and to visit the scientific observatories — including ESO’s own — that use these skies as a natural astronomical laboratory. But one challenge now affecting Chile’s world-renowned dark skies is that of light pollution. 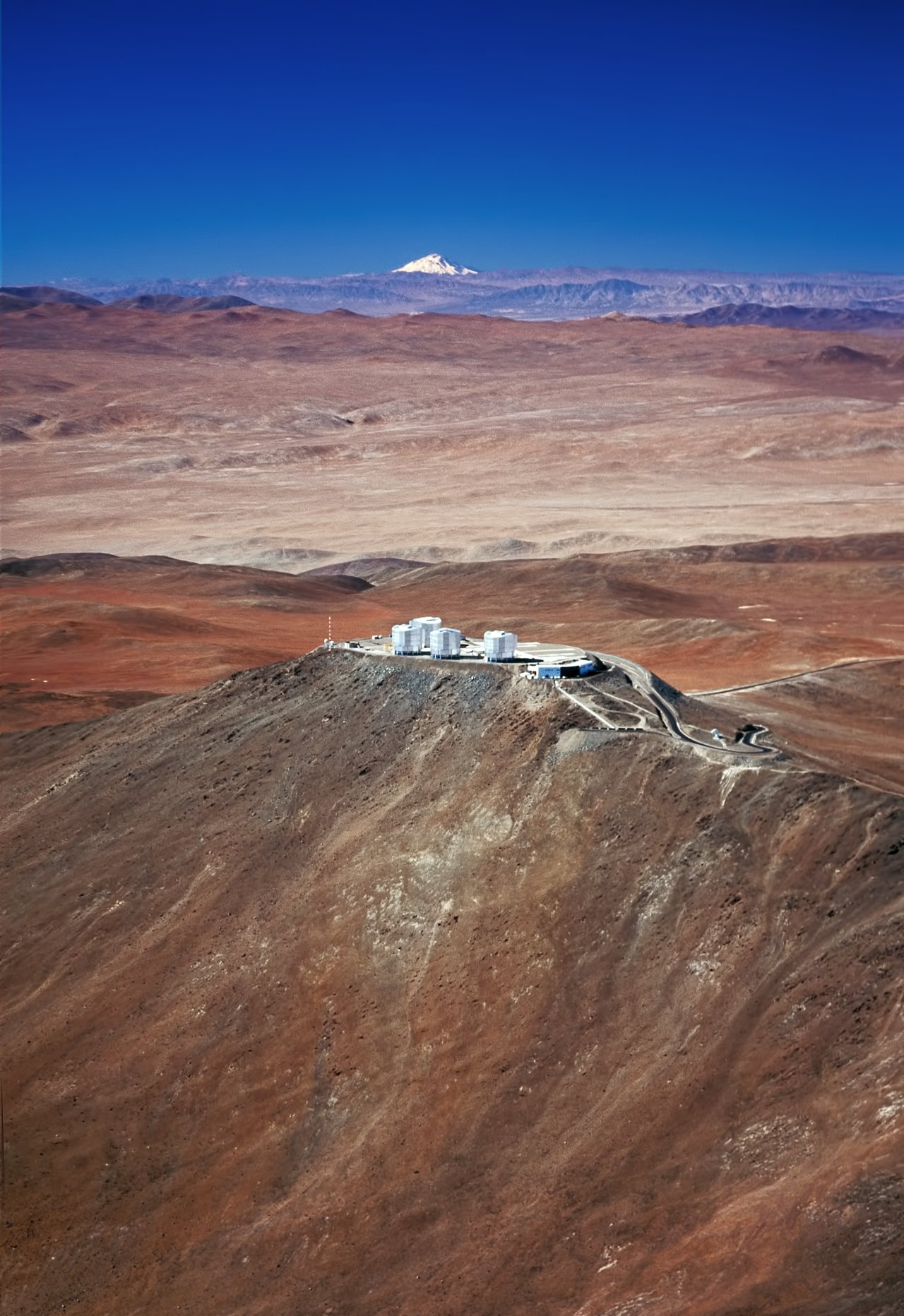 ESO’s Paranal Observatory is located at an altitude of 2600 metres on Cerro Paranal in Chile. This image is a testimony of the magnificent air quality and ideal conditions.
Credit: ESO/G.Hüdepohl
Tourists flock from far and wide to find out about the technology behind ESO’s world-class telescopes

The intense Sun beats down on the tourists’ cars as they climb the dusty desert road up Cerro Paranal. The 130-kilometre journey from the closest city of Antofagasta will be worth it because waiting at the top is ESO’s Paranal Observatory. The tourists have been eagerly awaiting their tour of this incredible site since they booked it a month ago. Every Saturday, two of ESO’s Chile-based observatories — Paranal and La Silla — open their doors for organised tours led by ESO’s education and Public Outreach Department on behalf of the ESO Representation Office.

Tourists come from far and wide to find out about the technology behind ESO’s world-class telescopes — how they are built and operated, and how astronomers use them to make groundbreaking discoveries. Each tour begins at the visitor centres, which are currently being upgraded with new content designed for the ESO Supernova Planetarium & Visitor Centre, before the guests are taken to see what they really came for: the telescopes. Visits to Paranal are centred around ESO’s Very Large Telescope, the world’s most advanced optical instrument and the flagship facility of European optical astronomy. Visitors also see the control room where astronomers work, and the Paranal Residencia — the astronomers’ “home away from home” when they are observing in Chile. At La Silla, on the other hand, visitors spend time at the ESO 3.6-metre telescope and the New Technology Telescope before ending the day at the Swedish–ESO Submillimetre Telescope.

Astronomy enthusiasts can also visit the Operational Support Facility for the impressive Atacama Large Millimeter/submillimeter Array (ALMA). The word “alma” means “soul” in Spanish, and there is definitely something spiritual about this extraordinary location. With its 66 antennas spreading across the desert, ALMA is a hugely popular observatory to visit — tourists book at least two months in advance for an eye-opening tour of the control room, laboratories, and antennas under maintenance.

The tours at each of these three sites are led by a team of enthusiastic guides. Most are local students who love to share their passion for astronomy. Gonzalo Aravena, a guide at Paranal, thinks that “being a small part of the great astrotourism that exists in Chile today is something to be proud of”, and Jermy Barraza, a La Silla guide, believes that guiding visitors is “a great support to our country’s culture, and encourages awareness of the natural resources that should be protected”. 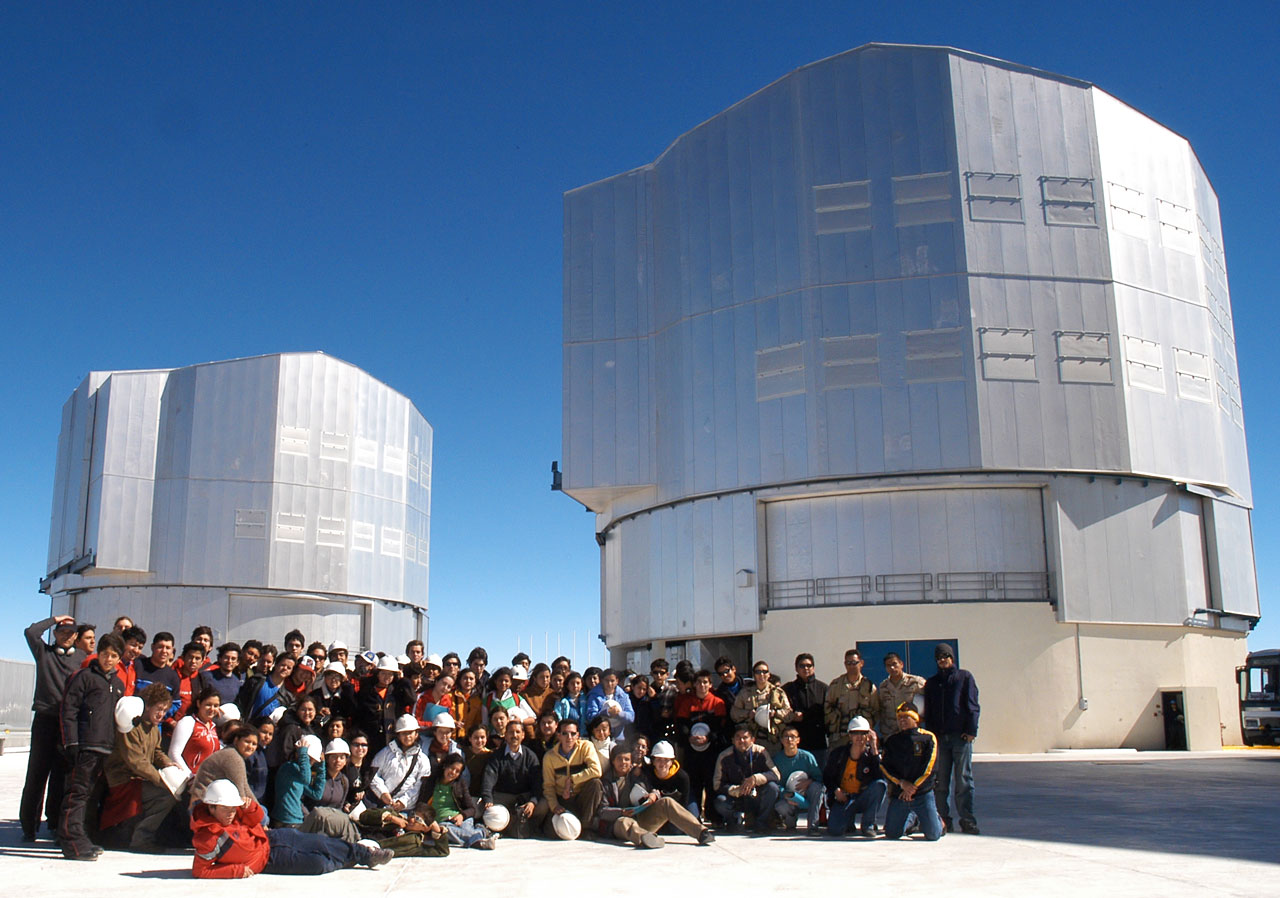 With almost 10 000 visitors a year to Paranal and 4000 to La Silla, these ESO observatories are the most popular Chilean sites for astrotourists, especially those who want to visit scientific facilities. Francisco Rodríguez, ESO’s Press Officer in Chile, explains, “Astrotourists are increasingly enthusiastic about experiencing dark skies and impressive astronomical observatories, and ESO sees this reflected in the growing number of visitors that arrive each year — over the last four years we’ve seen the numbers double”. This value is especially impressive considering how difficult the observatories are to get to.

ESO avoids organising tours and events at night, leaving astronomers undisturbed and able to focus on their scientific research. Usually daytime tours are the only way to visit an ESO observatory, however, the doors are often opened for special events; for example Mercury’s transit of the Sun in 2003 and the partial solar eclipse in 2010. Visitors come to ESO to see the impressive technology and to understand how a professional observatory works, which often leads them to make nighttime visits to other stargazing locations. 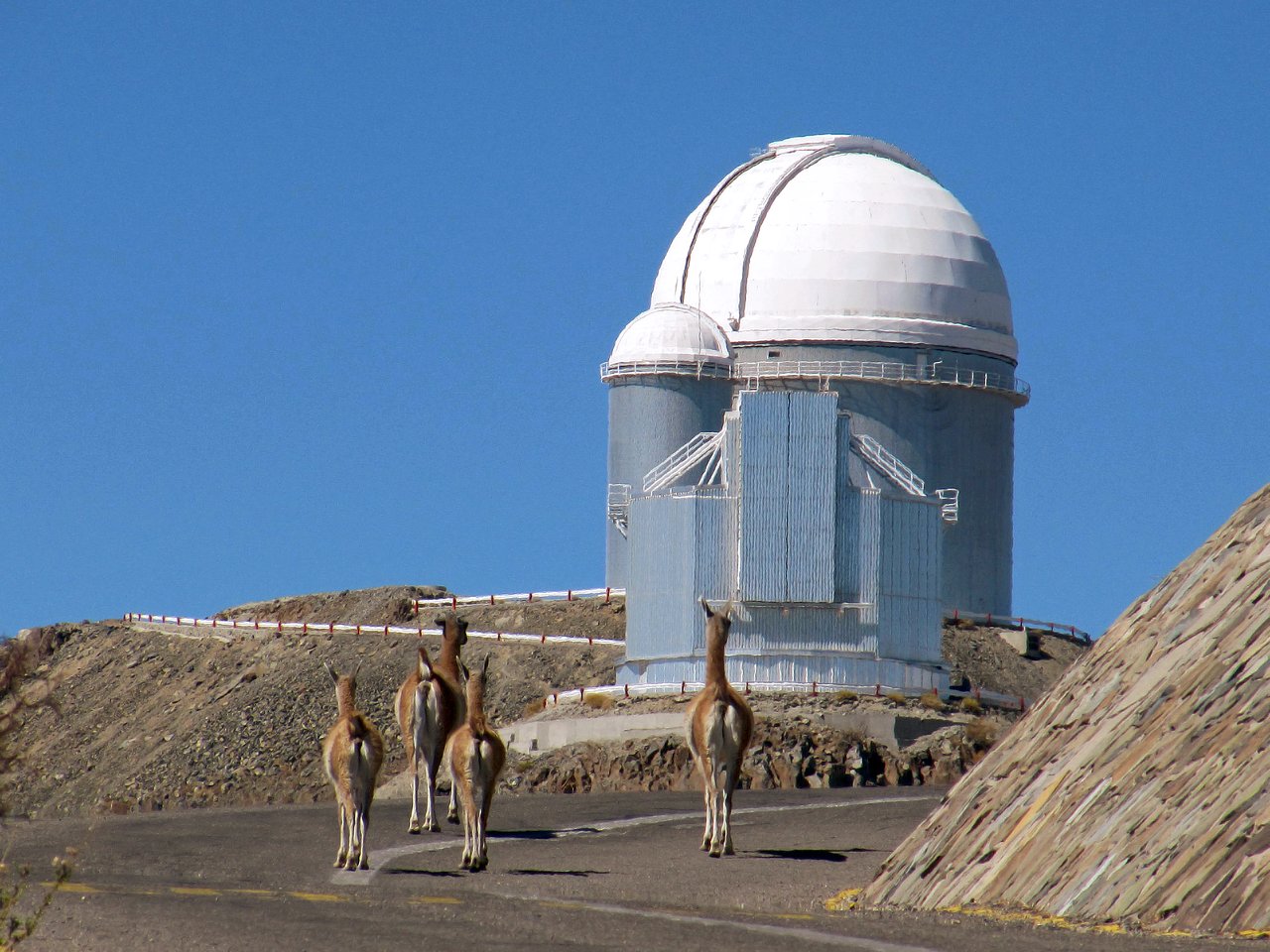 Visitors are not always human! These furry tourists — vicuña, a relative of the llama — are admiring the ESO 3.6-metre telescope at La Silla.
Credit: E. Matamorros/ESO

“Chile is an amazing country for astrotourism,” says Rodríguez. “Visitors can combine day visits to the most impressive telescopes in the world, with nighttime views of the stars at tourism observatories across the country.” 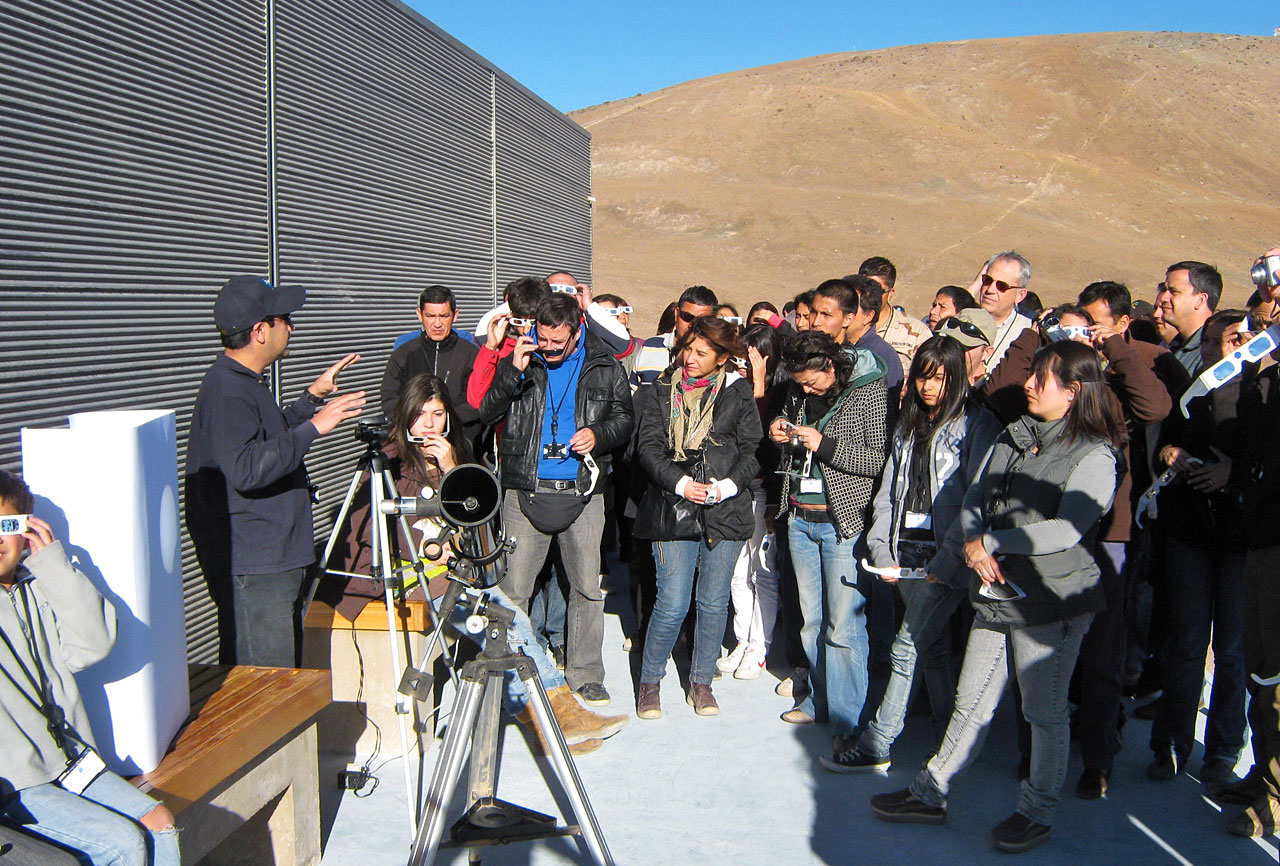 A group of visitors prepares to observe a partial solar eclipse visible from Paranal Observatory on 11 July 2010.
Credit: F.Char/ESO

Observatories such as the Collowara Tourism Observatory are popping up specifically for amateur stargazers, and many hotels provide telescopes for their guests to enjoy the beautiful skies. Elqui Domos Hotel has gone even further — dome-shaped rooms feature removable ceilings that open onto the sky, and guests can sleep in observatory cabins with glass roofs. Various astronomical museums have also been opened, including the San Pedro Meteorite Museum, which also conducts stargazing tours.

Recently, ESO actively collaborated with other governmental, academic, and scientific groups to support a governmental initiative called Astroturismo Chile. Its aim is to “transform Chile into an astrotouristic destination of excellence, to be admired and recognised throughout the world for its attractiveness, quality, variety and sustainability”. Fernando Comerón, the former ESO representative in Astroturismo Chile, elaborates that the strategy “aims to improve the quality and competitiveness of existing astrotourism activities, in addition to preparing the Chilean astrotourism roadmap for 2016–2025”.

But Chile’s dark skies are facing a growing challenge. La Serena, the closest major city to La Silla Observatory, is expanding rapidly; the region’s population has swelled to over 700 000, growing by more than 200 000 people in the last 20 years. Although some of these people are astronomers and dark sky lovers, increased development can mean increased light pollution if not carefully handled.

Light pollution is artificial light that shines where it is neither wanted or needed, arising from poorly-designed, incorrectly-directed light fixtures. Light that shines into the sky is scattered by air molecules, moisture and aerosols in the atmosphere, causing the night sky to light up. This phenomenon is known as skyglow. Solutions include power limits for public lighting; shielding street lamps, neon signs, and plasma screens; and stricter guidelines for sport and recreational facilities.

The arch of the Milky Way emerges from the Cerro Paranal on the left, and sinks into the bright lights of Antofagasta, the closest city to Paranal Observatory.
Credit: Bruno Gilli/ ESO

Dark skies are incredibly important to ESO Photo Ambassador, Petr Horálek, who reflects, “I remember a law called Norma Lumínica was signed in 1999 requiring that lighting in the three astronomically-sensitive regions of Chile be directed downwards instead of into the sky… Of course, there are no lamps along the roads close to the observatories”.

The Norma Lumínica, which establishes protocols for lighting regulations in Chile, was recently updated in 2013 to adapt to new technologies. 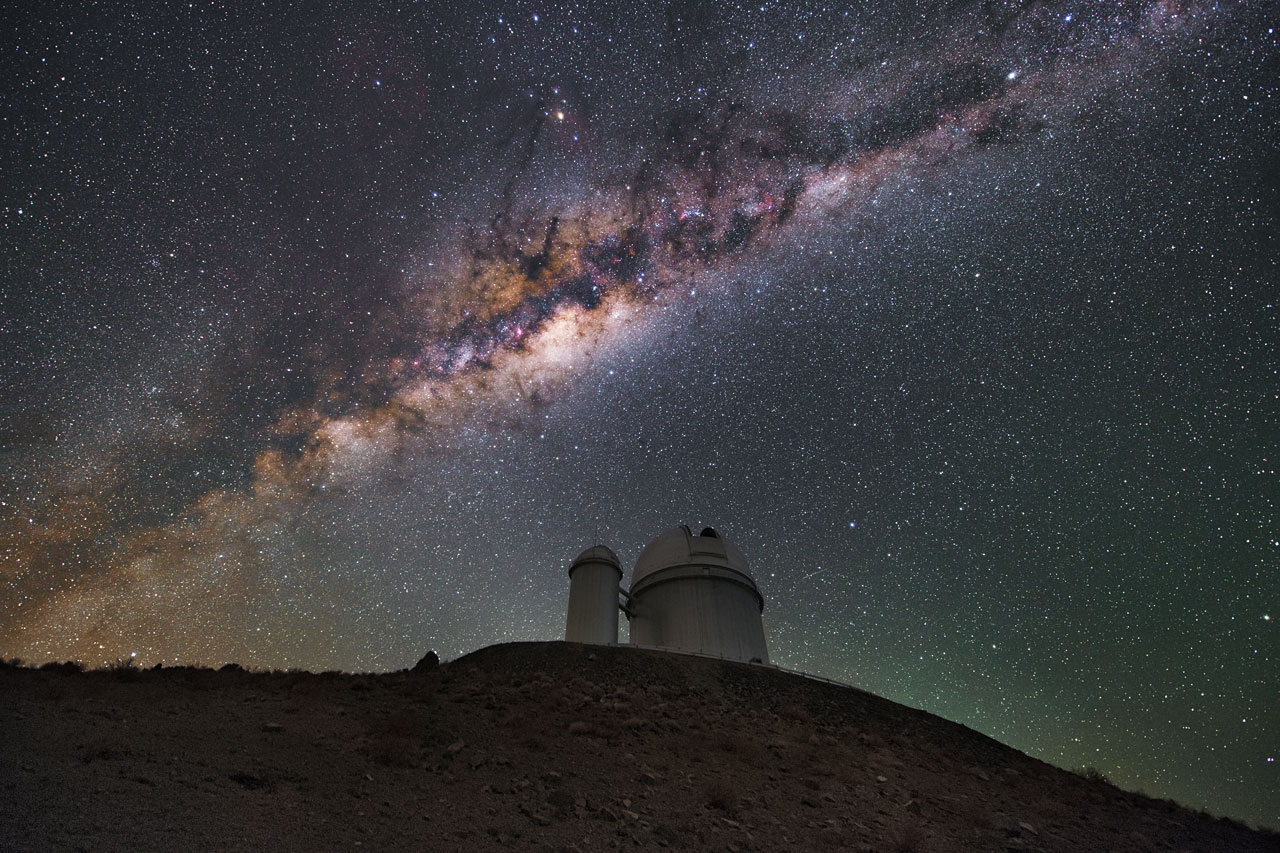 Chile is also working with international observatories to encourage UNESCO to add major astronomy sites such as Paranal Observatory to its World Heritage List.

“By promoting the preservation of natural conditions, particularly the dark skies, astronomy contributes to the formation of an environmentally-aware society”, says Comerón.

In the next decade, the number of astrotourists visiting Chile will triple

Over the next ten years, Chile plans to invest in many new observatories. Currently, more than 50% of the world’s large telescopes are located there, and the Chilean government believe that by 2020 that value could rise to more than 70%. IndexMundi, a data portal that gathers statistics from around the world, suggests the annual number of visitors to Chile has more than quadrupled in the past 15 years In 2017, 6.45 million visitors arrived in Chile, many of whom were enticed by the incredible night skies, and the reports from the Astroturismo Chile initiative estimate that in the next decade, the number of astrotourists visiting Chile will triple. 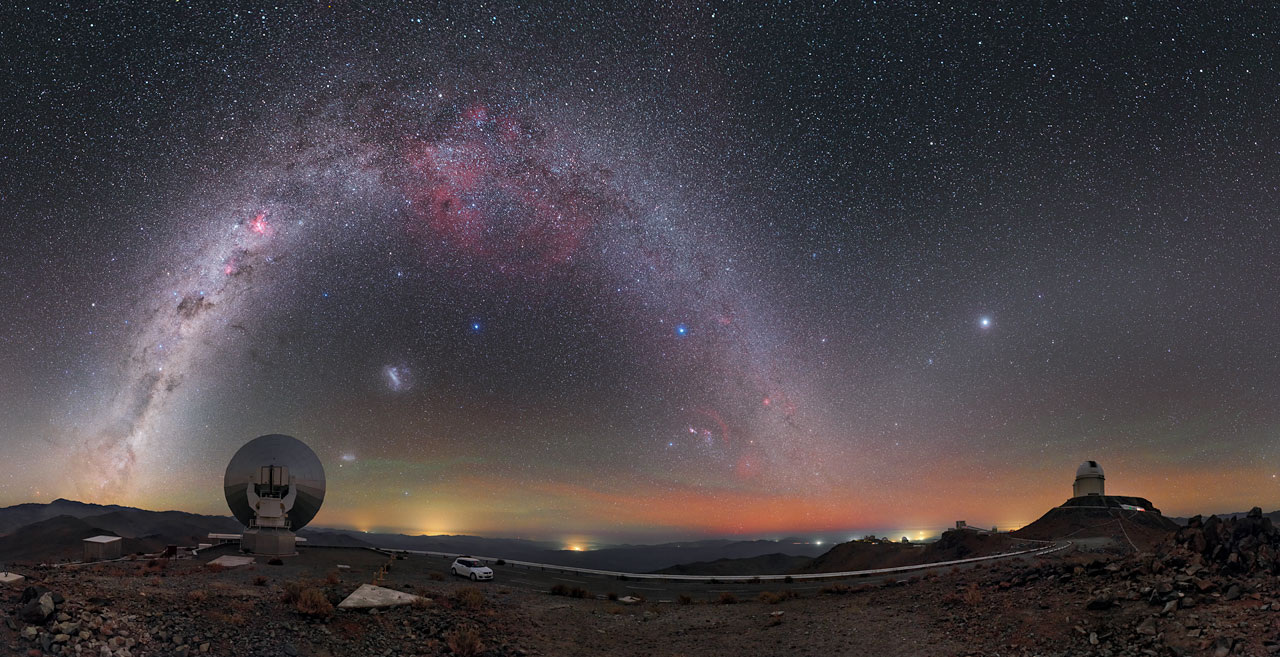 A rare sight for most, this magical celestial display is commonplace at astronomical observing sites like La Silla. But light from distant cities and roads are visible even from remote and very dark locations such as this one.
Credit: P. Horálek/ESO

Chile has its work cut out to limit the impact of light pollution on its magnificent skies, but if successful the country will benefit greatly — as will the visitors who continue to flock there. As La Silla guide Yilin Kong says, “Astrotourism helps teach people about the importance of astronomy, and to encourage the next generations to participate in it".