Behind the scenes at ESO: Showing you the road to the stars
What you’ll discover in this blog post:
In the most accurate measurement to any galaxy ever, a team of scientists recently calculated the distance to the Large Magellanic Cloud to an incredible precision of 1%. This research was carried out in the hope of gaining a better understanding of dark energy and the future of the Universe. And it worked. We speak to the lead scientist involved in this study — Grzegorz Pietrzyński — to find out more about the enormous implications of this extraordinary measurement. 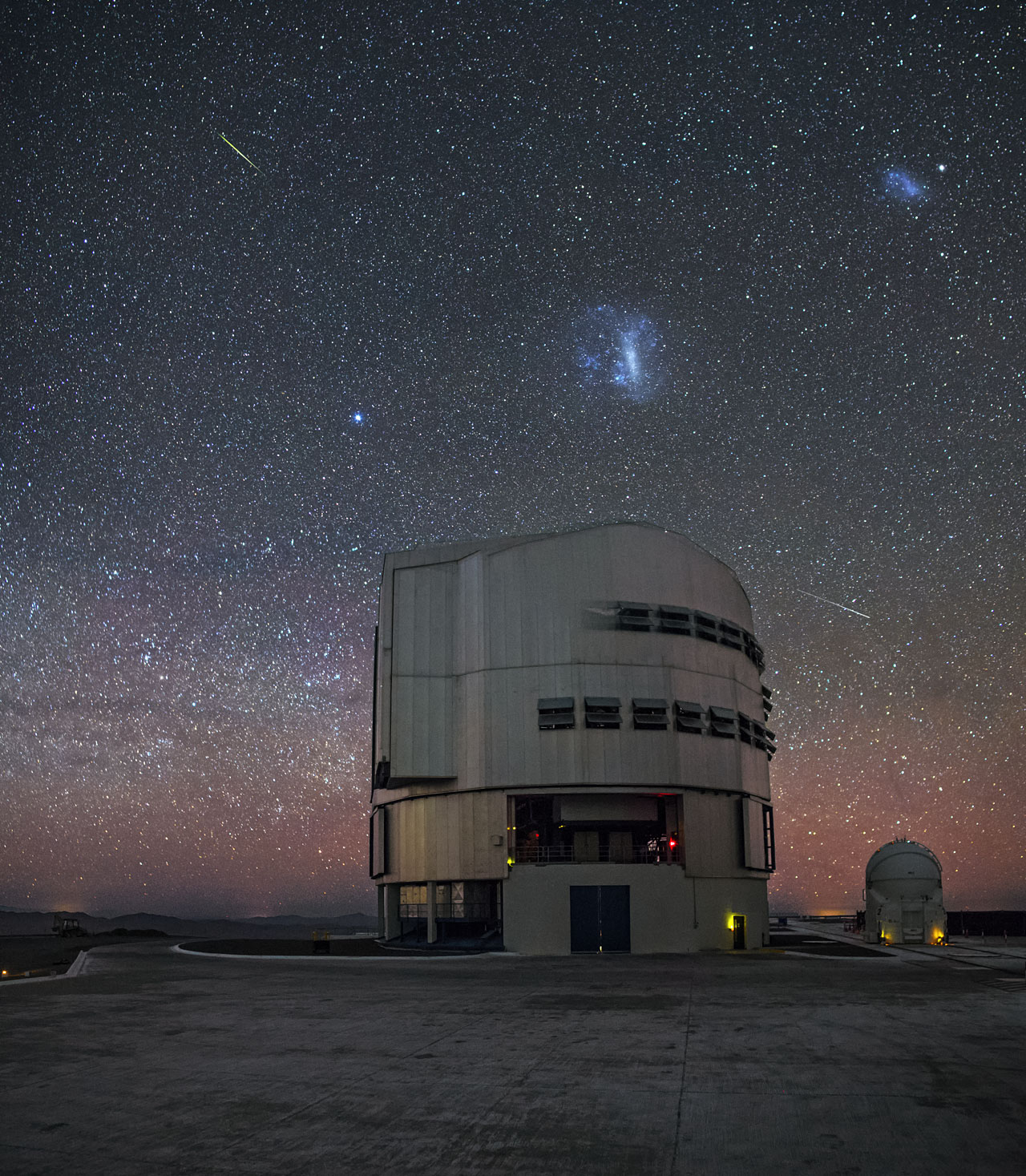 The Large and Small Magellanic Clouds glow above one of the four Very Large Telescope Unit Telescopes.
Credit: A. Tudorica/ESO

Q. First of all, why is it important to measure the distances to other galaxies?

A. Since our ancient ancestors began thinking about the cosmos, measuring distances has been one of the most important, fascinating and challenging goals in astronomy. It’s much more than recognising the scale of the Universe; it also means understanding the physical nature of astronomical objects, and each significant improvement in the accuracy of the distance scale opens up whole new fields of astrophysical research.

It is especially important to measure the distance to the Large Magellanic Cloud — also known as the LMC — because distances to all the other galaxies in the Universe are calibrated against this one.

Q. Could you expand upon what you mean by that?

But to get an accurate distance, it is important to know the exact relationship between luminosity and pulsation rate. To calculate this relationship, astronomers have previously been using a technique called parallax to measure distances to individual Cepheids in the Milky Way.

Standard candles are objects with a known luminosity that can be used to gauge cosmic distances.
Credit: NASA/JPL-Caltech

But another way, and indeed currently the best way, to measure the period-luminosity relationship of Cepheids is to measure the distance to a galaxy with a rich population of these stars, for example the LMC.

By calculating the precise distance to the LMC, and getting an accurate value for the Cepheid period-luminosity relationship, we can look at even more distant Cepheids, in galaxies further away. And in these galaxies another type of standard candle exists: bright stellar explosions called type Ia supernovae.

Q. So by looking at type Ia supernova in even more distant galaxies, we find out more about the scale of the Universe?

A. Exactly! But there’s a catch. The type Ia supernovae in more distant galaxies are further away than they would be in a static Universe, because the Universe is expanding. This was discovered in the early 20th century by Edwin Hubble, who explained the expansion using a value called the Hubble constant. And because of the difference in what the supernovae look like, and what they would look like in a static Universe, we can use them to probe the expansion of the Universe and calculate the Hubble constant.

But after 100 years of trying to determine this value, it turned out that the most difficult and challenging step is the first one: to calibrate the Cepheid period-luminosity relationship. We aimed to do this more precisely than ever before using eclipsing binary stars to measure an accurate distance to the LMC, a galaxy which possesses a few thousands Cepheids. This enabled us to work out the period-luminosity relationship of Cepheids in the LMC very accurately.

Q. Could you tell us more about how you measured the distance to the LMC?

A. Well in 2013 I already worked with a team to measure this distance precise to 2% using eight eclipsing binary stars and several telescopes, including ESO’s 3.6-metre and New Technology Telescope. During each eclipse, the total brightness of the system dips, allowing us to measure the properties of the stars. By comparing their actual size with the size that they appear on the sky, we can calculate their distance from Earth.

But 2% was not enough. In astronomy, we are always working to find out things with more precision. So this time round, we looked at 20 eclipsing binaries to find the distance much more precisely. It involved observing for several hundred nights over 20 years, using many different telescopes including ESO’s Very Large Telescope.

This illustration shows the three steps astronomers previously used to measure the expansion rate of the Universe to an unprecedented accuracy, reducing the total uncertainty to 2.4%. With the new LMC distance measurement (using eclipsing binaries as the first step rather than parallax), this uncertainty will reduce to just 1.5%.
Credit: NASA, ESA, A. Feild (STScI), and A. Riess (STScI/JHU)

Q. So what did you find the distance to be this time round?

A. We found that the LMC is 1 497 000 000 000 000 000 kilometres away, with an uncertainty of just 1%, meaning that the actually value could be up to 1% larger or smaller than this value. It’s incredible to think that we can be so sure about the distance to something so far away!

Q. Could you explain more about why it is so important to know the value of the Hubble constant?

A. Knowing the Hubble constant helps us find out how fast the Universe is accelerating, which effectively means that we can predict the future of the Universe. Will it expand forever? Will it stop accelerating and one day collapse? Astronomers now believe that it will expand forever, becoming colder and colder until it can no longer support life.

In the 1990s, astronomers discovered that the expansion of the Universe is accelerating because of a mysterious phenomenon called dark energy. Since then, explaining dark energy has been a major challenge. But by becoming more certain about the Hubble constant, we will find out more about dark energy.

We can also use the Hubble constant to find out lots of other information about the Universe, for example the amount of matter and radiation that exists. Therefore, an independent, highly accurate measurement of the Hubble constant is vital for making significant progress towards understanding cosmology in general.

Furthermore, there’s another way to measure the Hubble constant using the cosmic microwave background radiation. But this gives a very different result and we have no idea why! Therefore it is extremely important to improve the precision and accuracy of the Hubble constant to investigate this discrepancy in more detail. If the discrepancy is confirmed, modern physics requires significant revision.

The cosmic microwave background (CMB), as observed by the ESA Planck satellite. The CMB is a snapshot of the oldest light in the Universe.
Credit: ESA/Planck Collaboration

Q. Are there any other implications of this result?

A. One implication is that our new technique can be applied to verify how good other methods of measuring distances are. For example, ESA’s Gaia space observatory is using the parallax method to create a 3D map of the Milky Way. By comparing Gaia measurements to measurements obtained through our eclipsing binary method, we can figure out the accuracy of Gaia’s map.

Nearby galaxies in general, and especially the LMC as the closest galaxy, are perfect laboratories for studying different objects and processes. But for many of these studies we need to know precise distances. With the advent of huge telescopes like the Extremely Large Telescope, we will be able to conduct studies of nearby galaxies with unprecedented accuracy, making it vital that we already know precisely how far away they are.

Q. Is there anything else you would like to mention?

A. I would like to thank many astronomers involved for interesting discussions, suggestions, and stimulation, the staff at La Silla, Paranal and Las Campanas for their excellent support during observations, and the funding agencies for their generous support.

Grzegorz Pietrzynski is a full professor at the Nicolaus Copernicus Astronomical Center in Poland. His main interests include the extragalactic distance scale, nearby galaxies, Cepheids and eclipsing binaries. Grzegorz is coauthor of 389 refereed publications including 12 publications in Nature and Science. His papers have been cited about 19 000 times.