It is the evening of the 29th of October 2001 on the top of Cerro Paranal in the Chilean Atacama Desert, twenty years ago today, and there’s more than the usual dose of excitement in the air. A group of astronomers and engineers are busily working on the platform of ESO’s observatory, getting ready for a night that will forever change the way we probe the cosmos from Paranal. After years of preparatory work, the Very Large Telescope Interferometer (VLTI) is about to open its eyes, sparking the beginning of two decades of stunning scientific discoveries. In this blog post, the first of a two-part series, we celebrate the twentieth anniversary of that historical night with the memories of some of the scientists who experienced it in person. 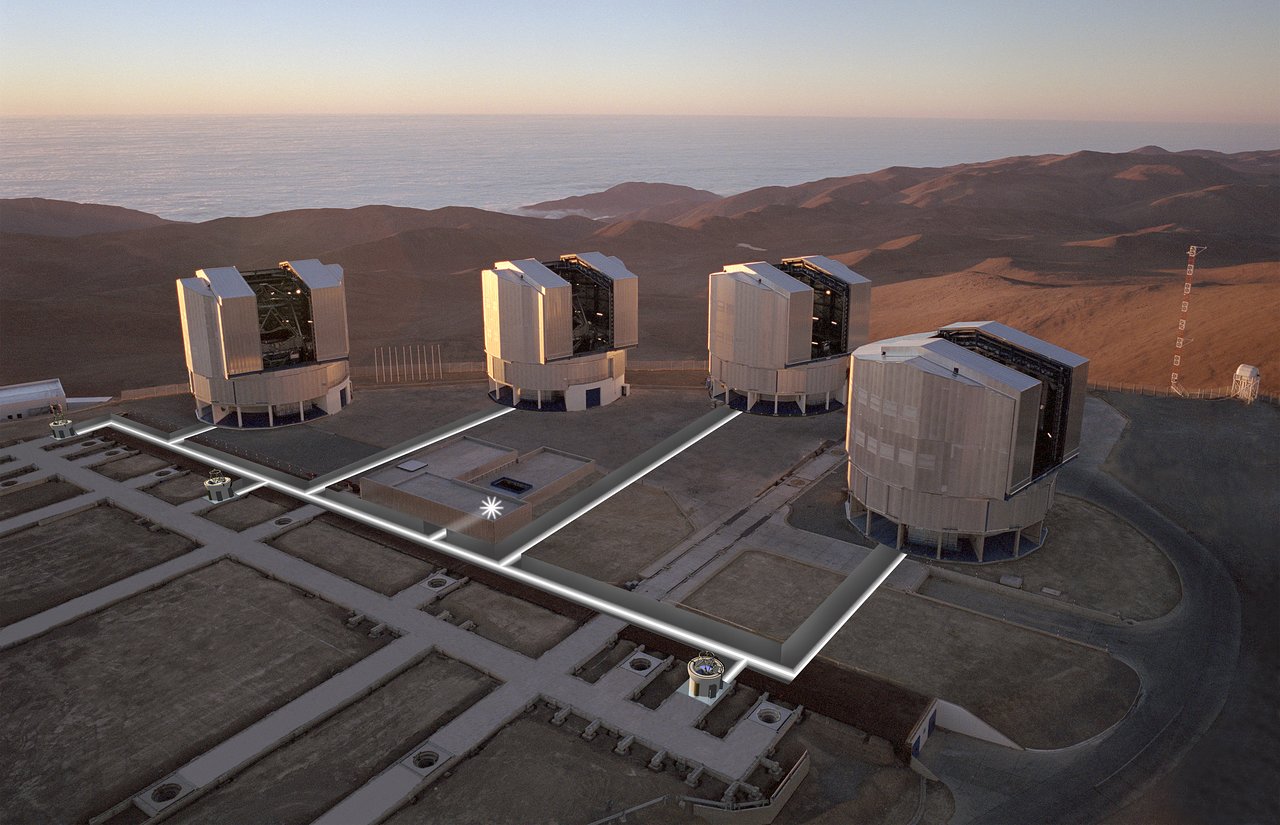 The VLTI tunnels overlaid as white lines on an aerial view of Paranal. The light gathered by the Unit Telescopes (top) or the smaller Auxiliary Telescopes (bottom) is directed by a complex set of mirrors towards the VLTI lab, marked with a star.
Credit: ESO

In the beginning there were the four Unit Telescopes (UTs), perched on Cerro Paranal and making up ESO’s Very Large Telescope (VLT). The idea had always been to combine the light collected by the UTs with a technique called interferometry. Why? Because this creates a “virtual”, giant telescope — the VLTI — which is as large as the distance between the linked UTs, located up to 130 metres apart on the Paranal platform. And since a telescope’s sharpness increases with its diameter, the VLTI would allow to discern much finer details than the individual UTs, whose main mirrors are 8.2 metres large.

Yet big rewards only come with big risks. Linking the UTs with interferometry was an enormous technological challenge. For example, the light collected by the UTs had to be sent through a complex system of mirrors in underground tunnels positioned with a precision of around one thousandth of a millimetre!

A feat this scale required years of careful planning and testing. One major test of the feasibility of the VLTI was passed on March 17, 2001, when astronomers and engineers managed to successfully combine the light from the star Sirius collected by two small test telescopes (the “siderostats”) and see the “first fringes” — the patterns resulting from the interference of both lightwaves.

This proved that the VLTI concept could work, and the VLTI staff spent the following months getting ready for the moment of truth, set for the 29th of October 2001: combining the light of two UTs.

“Back then I was at Paranal as I was responsible for the mirrors M9, M10 and M11 of the UTs,” remembers Françoise Delplancke-Ströbele, now Executive Officer for the Directorate of Engineering at ESO, referring to the mirrors under the UTs that send the light towards the VLTI tunnels. “M9 was a big mirror, very difficult to make, and the company who had to produce it was late, so the mirror was coming the day after the first fringes.”

But everything was ready to point the UTs to Achernar, the star chosen for the first fringes, so Françoise had to quickly find a solution. Fortunately, for that very first observation, not all of M9 and its special features were needed, so she found two smaller and simpler mirrors (one for each UT to be used for the observation) and went to the Paranal workshop. “I asked if they could make me two pieces of wood with a hole in them to sustain the mirrors, and then we used them in the telescope instead of the original mirror. It was a very bad quality wood, but this sort of 'MacGyver bricolage' worked well enough!”

With the MacGyver solution in place, everything was ready for the light from the two UTs to be combined. Except, the sky conditions that night weren’t great. Thinking the observations couldn’t take place, Françoise went to bed while her colleagues operated the interferometer. “And then, in the middle of the night, I got a phone call: 'we’ve got the first fringes, come!', so I got out of bed and went to celebrate!” In case you are wondering, when they installed the official mirrors the following day, the system still worked. Phew!

“In the middle of the night, I got a phone call: `we’ve got the first fringes, come!´”

That first observation of the VLTI enabled the calculation of Achernar’s size. This was the first of the many scientific results made possible by the VLTI’s stunning sharpness, which could resolve details about 10 m wide at the distance of the Moon.

The sharpness of the VLTI becomes even more impressive when thinking about the whole concept behind it. Basically, two lightwaves emitted at the same moment from a star wander undisturbed through the galaxy until they reach the Earth, and those last few kilometers scramble everything! As lightwaves go through the atmosphere, air turbulence changes their directions and time of arrival at the telescopes. They then have to pass through 200 metres of air in the underground tunnels of the telescope and undergo 30 reflections on the mirrors, before meeting again at the same moment and at the same place within a fraction of a millionth of a meter, depending on the VLTI instruments. 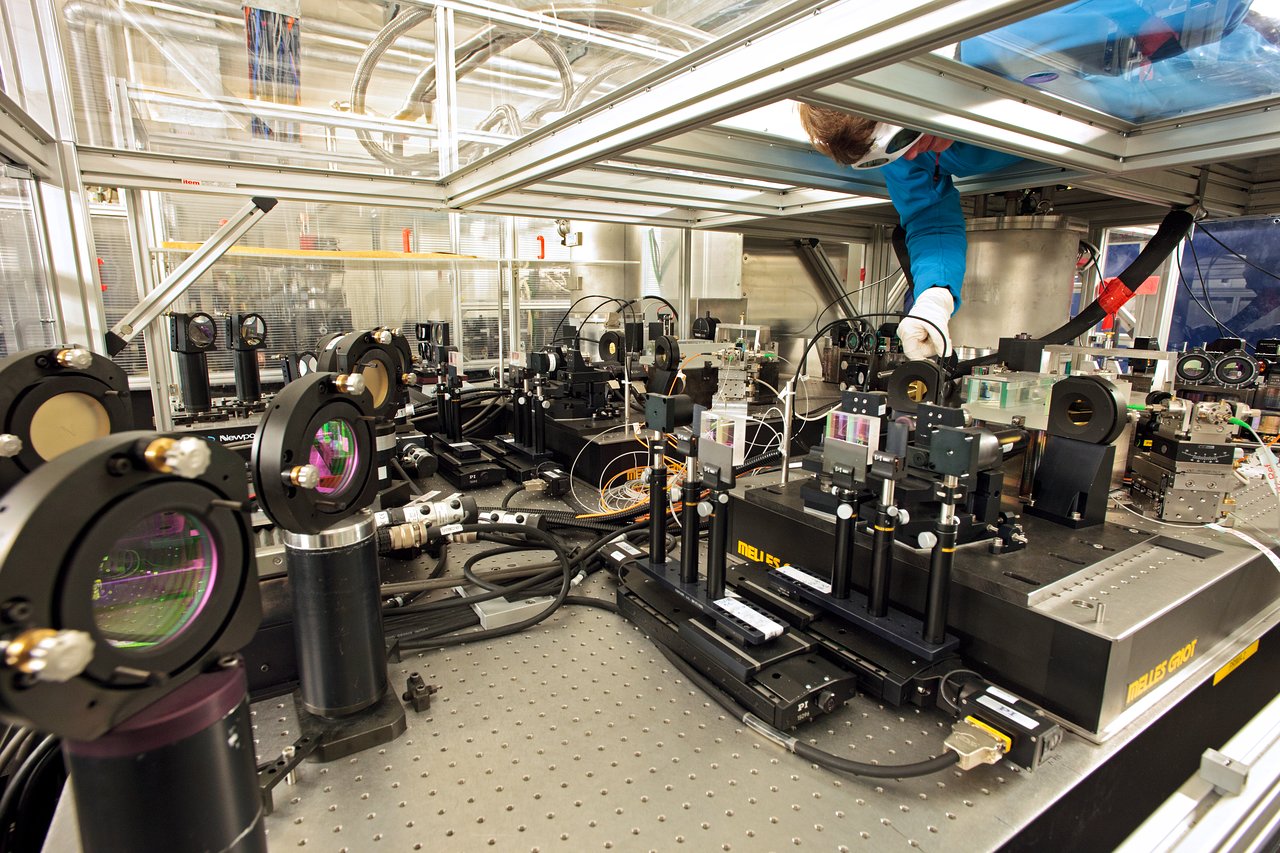 Françoise adjusting some optical elements of the PRIMA instrument at the VLTI lab.
Credit: ESO/H.H.Heyer

To achieve such precision, the VLTI must account for a multitude of factors, including any tiny source of vibrations, such as the wind... or earthquakes! This is very challenging in a country as seismic as Chile. “Once I was at the console of the VLTI making some observations and we started to feel an earthquake, which was magnitude three or four,” remembers Françoise. “After the earthquake, we retook the measurement, as the vibration of the telescopes caused by the earthquake could have disturbed the observation… and we got exactly the same result, as the VLTI is built in a way that measures the vibrations and cancels their effect.”

“I was in charge of VINCI, so the night of the first fringes I had to be at Paranal,” says Pierre Kervella, Astronomer at Paris Observatory (LESIA), and former ESO Staff and Fellow in Chile and ESO student in Garching, referring to the VINCI test instrument installed on ESO's VLTI for the first fringes and subsequent test phase.

“VINCI was used to validate the infrastructure of the VLTI, which is quite complex, so it was imagined to be simple, as we don't need another complicated instrument to validate a complicated installation. Yet it had to be reliable and very precise, more precise than anything existing at that time,” explains Pierre, whose doctoral studies were mainly dedicated to building VINCI. “When I started my PhD, the instrument was a manual sketch on a sheet, and at the end of the PhD it had reached first fringes and scientific results.”

A few months earlier the interferometer at Keck Observatory in the US had successfully combined the light of its two 10-m telescopes, and the team was motivated by this exciting competition.

“Despite the tiredness, there was a very nice spirit in the team, because we were doing something uniquely challenging.”

The night when VINCI enabled the VLTI to see the first fringes with two UTs is still a vivid memory for Pierre. “That night was not supposed to be for scientific observations, only for testing. But if you are an astronomer and have the biggest instrument in the world and the whole sky for yourself…” remembers Pierre, who adds: “I could choose whatever star and have a look at it, it was an incredible feeling. All the famous objects in the southern sky, such as Eta Carinae or Epsilon Eridani, were at hand, it was the first time we could look at them in such huge detail!”

The following morning Pierre went to sleep, exhausted after weeks of working up to 16 hours per day. “Despite the tiredness, there was a very nice spirit in the team, because we were doing something uniquely challenging,” says Pierre, who did not have long to rest, as the date of his PhD defense was just behind the corner.

“Two weeks after the first fringes I defended my PhD at the Paris Observatory. It was perfect timing, as I could show the first fringes during the defence, with my parents, friends and everyone present, it was nice!” continues Pierre “And of course I remember the big party we had in Chile to celebrate the fringes, which is when I learnt how to dance Cueca, Chile’s national dance!”

Françoise and Pierre are only two of the many key actors that made the VLTI a reality. In the second article in this series we will hear more stories about the VLTI first light; in particular, we will learn what the VLTI and werewolves have in common, and how a centuries-old sailing technique was key to correct a puzzling problem. Stay tuned!

Giulio Mazzolo is a science journalism intern at ESO. Before starting a career in science communication, he completed a PhD in astrophysics from the Max Planck Institute for Gravitational Physics in Hannover (Germany) and has been a member of the LIGO Scientific Collaboration.