For millennia, humans have gazed at the stars wondering if we could ever travel away from our own planet and if so, what lies to infinity and beyond. The discovery of more galaxies, stars and other worlds alongside the boom of space travel has allowed us to escape into our imaginations and try to answer some of the mysterious questions posed by the cosmos. What better device to tackle these questions than science fiction (or ‘sci-fi’), which allows us to let out creativity roam free in the realms of science?

While many portrayals of science in sci-fi are inaccurate and sometimes outrageous, a large proportion of stories are actually based on real planets, stars and galaxies, some of which we will explore here...

Betelgeuse is one of the brightest stars in the night sky, visible with just the naked eye. This red supergiant –– an evolved massive star –– lies within the constellation of Orion, famous for its belt. Betelgeuse is so huge that if it were to lie at the centre of our Solar System in place of our Sun, it would extend almost all the way out to Jupiter, far beyond Earth, engulfing us whole. Perhaps most notoriously, it is known for leaving astronomers scratching their heads after becoming visibly darker in late 2019 and early 2020, with the public wondering if Betelgeuse was about to reach the end of its life.

Images of the surface of Betelgeuse taken with the SPHERE instrument at ESO’s VLT, showing how a dusty veil partially dimmed the star over several months. SPHERE counteracts the atmospheric turbulence, revealing details that would be otherwise blurred.
Credit: ESO/M. Montargès et al.

If this was to occur, Betelgeuse would go supernova, an explosion that would be so bright it would be visible during the day for over three months! Unfortunately for space enthusiasts, the true cause for its dimming was uncovered by astronomers using ESO’s Very Large Telescope and it was simply a sheet of dust (itself the result of changes in Betelgeuse’s surface) shading this stellar beast. 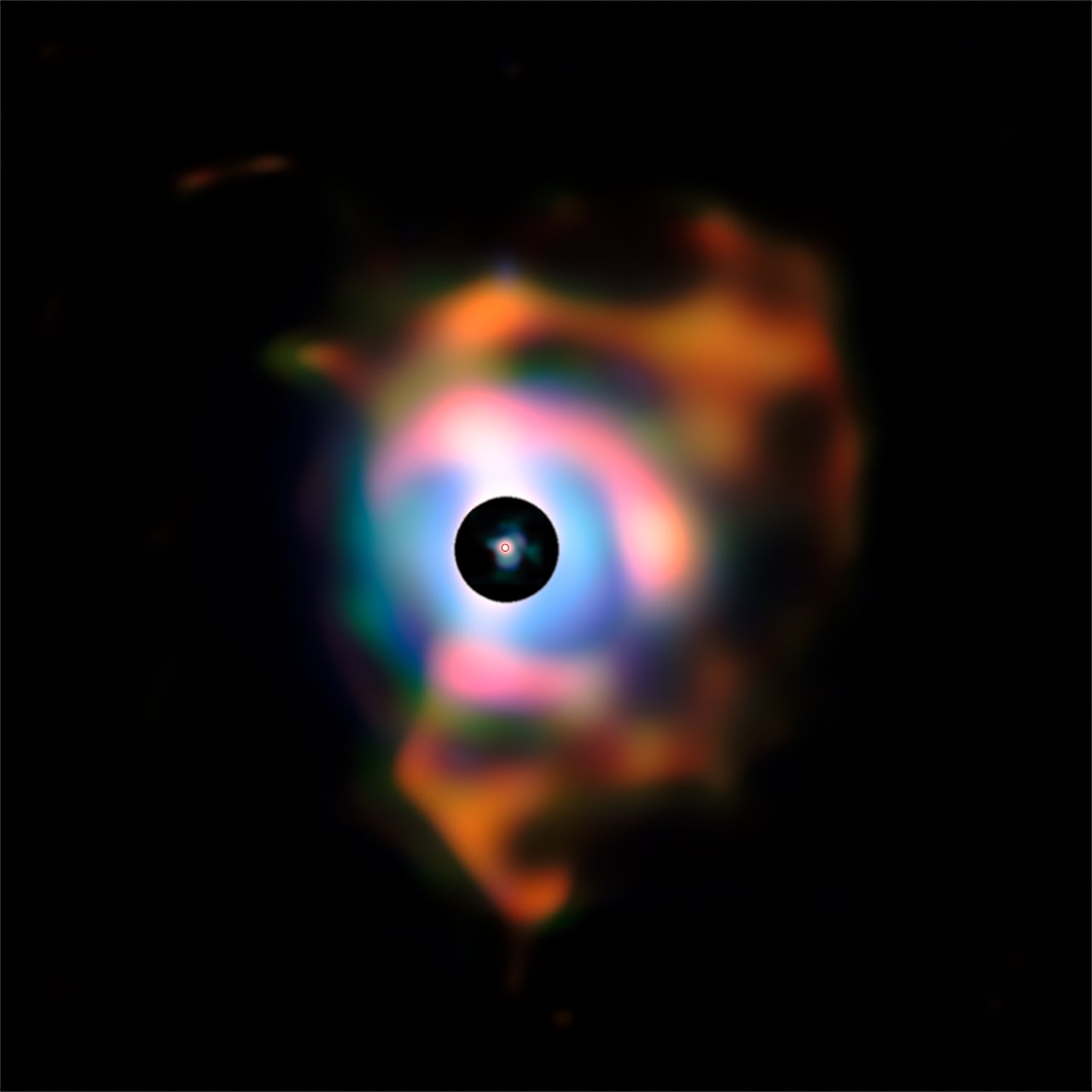 The close environment around Betelgeuse as seen by ESO’s VLT. The small image at the centre shows plumes of gas captured with the NACO instrument, whereas the much larger structures around it are made of dust and were observed with VISIR.
Credit: ESO/P. Kervella

Not only has Betelgeuse made headlines recently, it has also leant itself to the sci-fi community for many years. Perhaps the most famous use of ‘Betelgeuse’ is in the 1988 film Beetlejuice directed by Tim Burton. The main antagonist of the film is Betelgeuse (pronounced ‘Beetlejuice’), an undead ‘bio-exorcist’ whose job was to get rid of the living! If his name is said three times, he will appear and haunt you. The alternate spelling of his name is revealed by a game of charades to prevent unsuspecting victims from accidentally summoning him.

Beetlejuice isn’t the only film to use a homophone for Betelgeuse. The long awaited adaptation of the beloved sci-fi novel Dune by Frank Herbert hit the big screens in 2021, and also features a play on the star’s name. A creative homophone of Betelgeuse is used as a colloquial name for the planet Kuentsing V, a politically important planet for the freedom-fighting Fremen people, which they call Bela Tegeuse.

But Betelgeuse’s reach extends beyond homophones. In The Hitchhiker's Guide to the Galaxy (1979), a novel and radio series by Douglas Adams, this massive star hosts a planetary system home to carbon-based aliens, including the former president of the galaxy himself. In Planet of the Apes (1963), a novel by Pierre Boulle, scientific genius Professor Antelle invents a spaceship that can travel at nearly the speed of light –– something sadly still out of our grasp in real life. He and his companions voyage to the star Betelgeuse, said to be "emit[ting] red and orange lights": not too different to what we observe nowadays!

Alpha Centauri (α Centauri) is a triple star system made up of α Centauri A (Rigil Kentaurus), α Centauri B (Toliman), and α Centauri C (Proxima Centauri). Proxima Centauri is slightly closer to Earth than the other two stars, making it our closest stellar neighbour. It is no surprise many have dreamed of being able to travel there.

In the television series Lost in Space, created by Irwin Allen, the Robinson family, their pilot and a robot, set out from an overpopulated Earth in the spacecraft Jupiter 2. The crew is frozen in suspended animation for the five-and-a-half year voyage to a “known” habitable planet of Alpha Centauri, on which they are to establish a colony; however, they get lost en route.

More recently, Alpha Centauri made an appearance in James Cameron’s Avatar (2009). The film is set in 2154 on Pandora, a lush habitable moon of the gas giant Polyphemus of α Centauri A. Pandora, whose atmosphere is poisonous to humans, is inhabited by the Na'vi, 3-metre-tall blue-skinned intelligent humanoids who live in harmony with nature.

Of course any mention of Alpha Centauri would not be complete without talking about the world-wide phenomenon Star Trek. Our neighbouring star system is mentioned in many episodes including Metamorphosis (1967), in which Captain Kirk whimsically claims, "I'm a little green man from Alpha Centauri, a beautiful place, you ought to see it!".

Though Alpha Centauri has fascinated creatives for a long time, astronomers know more about the star system than science fiction might suggest. In 2016, researchers found clear evidence of an Earth-mass planet around Proxima Centauri, bringing a dose of reality to the stories. Using different instruments, including HARPS at ESO’s La Silla Observatory, astronomers detected the subtle wobble that the planet induces on its host star as it moves around it. But there’s more! Using the Atacama Large Milimeter/submilimeter Array, in which ESO is a partner, the same team discovered a dusty belt around Proxima Centauri, so this star could host a more complex planetary system.

Clash of the Titans

The Andromeda Galaxy is a spiral galaxy approximately 2.5 million light-years from Earth, or 770 kiloparsecs if we use the unit of measure preferred by both Star Trek and professional astronomers. It is in fact the nearest large galaxy to the Milky Way and, under a perfectly clear and dark sky, it is just visible to the unaided eye. The Andromeda galaxy is the most studied galaxy so far besides our own, and has provided astronomers with an abundance of breathtaking images.

It is orbited by several dwarf galaxies, making it a very busy galactic neighbourhood with plenty of potential for astronomers to get their teeth into. In fact, the Andromeda Galaxy is actually hurtling towards the Milky Way at 400,000 kilometres per hour and is set to pass through us in a few billion years. While this collision may sound catastrophic, it will in fact be rather peaceful: while the gravitational interaction will distort both galaxies, the stars themselves won’t collide with each other due to the large separation between them.

It is no wonder that our closest galactic neighbour is of such interest to the sci-fi community. It is the host of many fictional alien species: the Guardians of the Galaxy films take place primarily within it, and according to some comics Superman’s home planet Krypton is located there. Andromeda is also a recurrent location in shows like Doctor Who.

However, alien species from Andromeda are not always a threat to humankind. In the first series of the British comedy sketch show Monty Python's Flying Circus, blancmanges from the planet Skyron in the Andromeda galaxy were major comedic characters. For instance, they are seen to convert people into stereotypical Scotsmenin (Scots people) in order to win the Wimbledon tennis tournament.

As you can see, astronomy and science fiction have always gone hand by hand. The next decade of space exploration — with telescopes such as ESO’s Extremely Large Telescope in Chile — will bring a new generation of other worlds to feed creative sci-fi minds and allow us to travel beyond our wildest imaginations.

Juliet Hannay is part of the science communications team at ESO. She is a former student of the University of Glasgow acquiring a Bachelors and Masters degree in Astronomy and Physics. Juliet found a passion for science outreach and communication through her roles as Outreach Convenor, Vice President and President for the Women in STEM society and specialist editor for the Glasgow Insight into Science and Technology magazine.