Seeing into the heart of Mira A and its partner 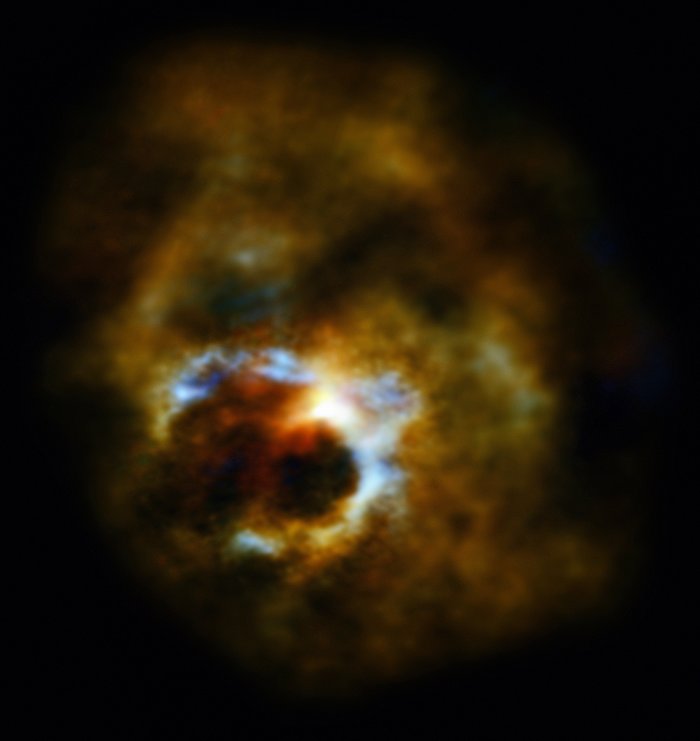 Studying red giant stars tells astronomers about the future of the Sun — and about how previous generations of stars spread the elements needed for life across the Universe. One of the most famous red giants in the sky is called Mira A, part of the binary system Mira which lies about 400 light-years from Earth. In this image ALMA reveals Mira’s secret life.

Mira A is an old star, already starting to throw out the products of its life’s work into space for recycling. Mira A’s companion, known as Mira B, orbits it at twice the distance from the Sun to Neptune.

Mira A is known to have a slow wind which gently moulds the surrounding material. ALMA has now confirmed that Mira’s companion is a very different kind of star, with a very different wind. Mira B is a hot, dense white dwarf with a fierce and fast stellar wind.

New observations show how the winds from the two stars have created a fascinating, beautiful and complex nebula. The remarkable heart-shaped bubble at the centre is created by Mira B’s energetic wind inside Mira A’s more relaxed outflow. The heart, which formed some time in the last 400 years or so, and the rest of the gas surrounding the pair show that they have long been building this strange and beautiful environment together.

By looking at stars like Mira A and Mira B scientists hope to discover how our galaxy’s double stars differ from single stars in how they give back what they have created to the Milky Way’s stellar ecosystem. Despite their distance from one another, Mira A and its companion have had a strong effect on one another and demonstrate how double stars can influence their environments and leave clues for scientists to decipher.

Other old and dying stars also have bizarre surroundings, as astronomers have seen using both ALMA and other telescopes. But it’s not always clear whether the stars are single, like the Sun, or double, like Mira. Mira A, its mysterious partner and their heart-shaped bubble are all part of this story.

The new observations of Mira A and its partner are presented in this paper.