One of the first images of the 22-watt laser being launched, taken by the Laser Pointing Camera (LPC) [1], shows the intense orange beam pointed at a globular cluster. Another LPC image shows the laser pointed close to the planet Saturn.

Finding multiple natural stars for this role is unlikely. So, to make correcting for the atmospheric turbulence possible everywhere in the sky, for all possible science targets, powerful laser beams are projected into the sky. When the beams interact with the sodium layer high in the atmosphere they create artificial stars. By measuring the atmospherically induced motions and distortions of these artificial stars, and making minute adjustments to the deformable secondary mirror, the telescope can produce images with much greater sharpness than is possible without adaptive optics.

When completed in 2016, the Adaptive Optics Facility will see the UT4 telescope become a fully adaptive telescope providing turbulence-corrected images for all its instruments, without the addition of adaptive modules and supplementary optics. The concept is more far-reaching than just installing a deformable secondary mirror since the telescope instruments have also been optimised to benefit from this upgrade.

In the future three further laser artificial guide stars will be installed in addition to the one that just saw first light. This will allow the atmospheric turbulence to be mapped in greater detail and will allow the telescope to produce even better images.

[1] The Laser Pointing Camera was developed by INAF-Osservatorio Astronomico di Roma in Italy and
and manufactured by Astrel-Instruments. 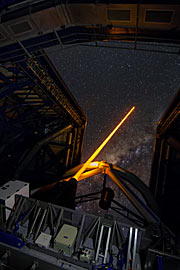 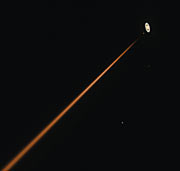 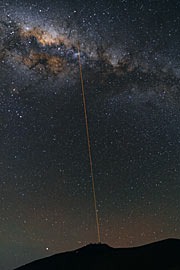 PR Video ann15034a
First light of new laser on Adaptive Optics Facility at Paranal
Send us your comments!
Subscribe to receive news from ESO in your language
Accelerated by CDN77
Terms & Conditions