A Strange Supernova with a Gamma-Ray Burst

Several articles appear today in the scientific journal Nature about the strange supernova SN 1998bw that exploded earlier this year in the spiral galaxy ESO184-G82 . These studies indicate that this event was linked to a Gamma-Ray Burst and may thus provide new insights into this elusive phenomenon. Important observations of SN 1998bw have been made with several astronomical telescopes at the ESO La Silla Observatory by some of the co-authors of the Nature articles [1]. The measurements at ESO will continue during the next years.

On April 25, the BeppoSAX satellite detected a Gamma-Ray Burst from the direction of the constellation Telescopium, deep in the southern sky. Although there is now general consensus that they originate in very distant galaxies, the underlying physical causes of these events that release great amounts of energy within seconds are still puzzling astronomers.

Immediately after reports about the April 25 Burst had been received, astronomers at La Silla took some images of the sky region where the gamma-rays were observed as a "Target of Opportunity" (ToO) programme. The aim was to check if the visual light of one of the objects in the field had perhaps brightened when compared to exposures made earlier. This would then provide a strong indication of the location of the Gamma-Ray Burst.

The digital exposures were transferred to the Italian/Dutch group around BeppoSax that had requested these ToO observations. Astronomers of this group quickly noticed a new, comparatively bright star, right on the arm of a small spiral galaxy. This galaxy was first catalogued in the 1970's during the ESO/Uppsala Survey of the Southern Sky and received the designation ESO184-G82 . It is located at a distance of about 140 million light-years.

The ESO astronomers at La Silla decided to continue observations of the new star-like object and set up a comprehensive programme with several telescopes at that observatory. During the subsequent weeks and months, they obtained images through various filtres to determine the brightness in different colours, as well as detailed spectra. These observations soon showed the object to be a supernova . This is a heavy star that explodes during a late and fatal evolutionary stage. The new supernova now received the official designation SN 1998bw .

From a careful study based on these observations, it has been concluded that SN 1998bw underwent an exceptionally powerful explosion, more violent than most other supernovae observed so far. It was also unusual in the sense that very strong radio emission was observed within a few days after the explosion - normally this only happens after several weeks. In fact, at radio wavelengths, SN 1998bw was the brightest supernova ever observed.

The origin of the Gamma-Ray Burst

SN 1998bw is obviously an unusual supernova. It is therefore of particular significance that a Gamma-Ray Burst was observed from the same sky region just before it was discovered in optical light. It is very unlikely that these two very rare events would happen in the same region of the sky without being somehow related. Most astronomers therefore tend to believe that the gamma-rays do indeed originate in the supernova explosion.

But can a single supernova be sufficiently energetic to produce a powerful Gamma-Ray Burst? New theoretical calculations, also published today in Nature, indicate that this may be so. Moreover, if the Gamma-Ray Burst observed on April 25 did originate in this supernova that is located in a relatively nearby galaxy, it was intrinsically much fainter than some of the other Gamma-Ray Bursts that are known to have taken place in extremely distant galaxies.

The main idea is that while the centres of most other supernovae collapse into neutron stars at the moment of explosion, a black hole was created in a very massive star consisting mostly of carbon and oxygen. If so, a very strong shockwave may be produced that is capable of generating the observed gamma rays.

A comparison of synthetic spectra from such a supernova model, based on a new spectrum-modelling technique developed by Leon Lucy at the ESA/ESO Space Telescope/European Coordinating Facility (ST/ECF), with the spectra of SN 1998bw observed at La Silla, show good agreement, thus lending credibility to the new models.

Much data has already been collected at ESO on the strange supernova SN 1998bw . More observations will be obtained by the astronomers at the ESO observatories in the future during a long-term monitoring programme of SN 1998bw . There is a good chance that this effort will ultimately provide fundamental information on the explosion mechanism and the nature of the progenitor star of this exceptional object.

This supernova's connection with a Gamma-Ray Burst will significantly enhance our understanding of the nature of these powerful and enigmatic events. In view of the range in emitted energy, it now seems likely that there may be more than one class of Gamma-Ray Burst.

According to some models for Gamma-Ray Bursts that include beaming (emission of the radiation in one prefered direction), it is possible that these events are only detected if they have a favourable angle with respect to the line of sight. In the case of SN 1998bw this is probably not the case, however, and it was only detected in gamma-rays, because it is so relatively nearby. The question of differences in intrinsic brightness and possible different classes of objects is far from settled yet.

PR Image eso9847a
A strange Supernova with a gamma-ray burst 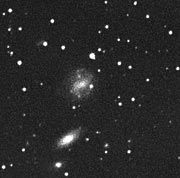 PR Image eso9847b
A strange Supernova with a gamma-ray burst