Recent News from the VLT Project

The ESO Very Large Telescope (VLT) project progresses rapidly. The first part of the Commissioning Phase for the first 8.2-m VLT Unit Telescope (UT1), concerning the Cassegrain focus and including optimization of the telescope performance, is now coming to an end. The next is dedicated to science observations and will start in a few days. This photo release provides information about the current activities and includes some recent photos from the Paranal observatory.

Science Verification About To Start

A two-week period of Science Verification will begin on August 17, 1998. This will involve actual astronomical observations with the VLT Test Camera. There will be several research projects, including deep imaging observations of fields in the HDF-South area.

A full description of the programmes selected for the Science Verification will also be found in an article in the June 1998 issue of the ESO Messenger.

Meanwhile, the first Call for Observing Proposals for the VLT UT1 has been issued with deadline on October 1, 1998 . It concerns the six-month period from April - September 1999 and involves the use of two major instruments, FORS1 and ISAAC (see below). In view of the great interest in the VLT and its potential for front-line research, it is expected that the pressure to obtain observing time will be high. Note also the VLT P63 Proposal Submission: Late Breaking News website.

The first FOcal Reducer/low dispersion Spectrograph (FORS1) was sent by plane to Santiago de Chile on July 4, 1998, well packed in 22 boxes. After a two-day trip on the Panamericana, it arrived at the base camp on Cerro Paranal in the afternoon of July 10. The FORS team from Göttingen, Heidelberg and Munich (Germany) started unpacking and re-integration of instrument sections next day in the Auxiliary Telescope Hall . Functional tests of the integrated sections were performed during the following days with excellent results. In particular, the delicate Multi-Object Spectroscopy system worked perfectly. Then the test crew for special verification and alignment work took over; these activities were successfully finished on August 7. See the photo and check the FORS Integration website.

FORS1 is now ready for the transport to the first 8.2-m VLT telescope (UT1)on September 10. It will then be installed at the telescope and 'First Light' of FORS1 will happen immediately thereafter. Then follows two Commissioning Phases to demonstrate the proper functioning of FORS1 in the environment at the telescope. Thereafter, FORS1 has to prove its scientific capabilities during a Science Verification Phase in mid-January 1999. It will then be offered for use by the astronomical community as from April 1999.

The second major instrument to be mounted on UT1, the VLT Infrared Spectrometer And Array Camera (ISAAC), arrived by air in Santiago on June 5, 1998 and reached Paranal three days later in a specially escorted convoy of two large trucks. To minimize the risk of transport damage to its delicate optics, the instrument had been disassembled after testing in Garching and its sub-assemblies spring mounted in special transport containers.

A team from ESO's Instrumentation Division in Garching arrived a week later to unpack, re-integrate, align and test this highly complex instrument in the Integration Laboratory on the mountain. After about 12 days, all was ready to evacuate the large vacuum vessel and cool the 350 kg opto/mechanical assembly to cryogenic temperatures using liquid nitrogen and closed cycle coolers mounted on the instrument.

A series of functional tests of the instrument plus its two large racks of electronics and software were then made followed by detector performance and other tests. In parallel, the large maintenance carriage and co-rotator systems were installed on the Nasmyth platform of UT1 in preparation for the later installation of the instrument. As ISAAC will be attached to and rotate with the Nasmyth adapter, this co-rotator is required to transport several kilometres of cables and cooling hoses from the platform mounted electronics racks, pumps and compressor to the instrument.

Final tests and calibrations of ISAAC will be made in October, followed by installation on the telescope and the first phase of testing on the sky starting on November 14, 1998. Final commissioning plus science verification observations are planned during a 3-week period in February 1999 and the first visiting astronomers are expected in early April 1999. 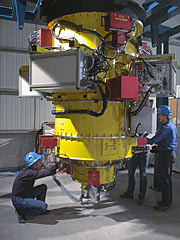 PR Image eso9837b
ISAAC at Paranal during the integration phase 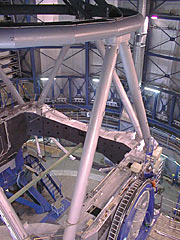 PR Image eso9837e
Construction of VLT UT4
Send us your comments!
Subscribe to receive news from ESO in your language
Accelerated by CDN77
Terms & Conditions