ESO and AMOS Sign Contract for the VLTI Auxiliary Telescopes

The company AMOS (Liège, Belgium) has been awarded an ESO contract for the delivery of the Auxiliary Telescopes (ATs) of the Very Large Telescope Interferometer (VLTI). Each of these telescopes has a main mirror of 1.8-metre diameter. They move on (railway) tracks on the top of the Paranal mountain. Together with the main 8.2-m VLT Unit Telescopes (UTs), they will ensure that the VLTI will have unequalled sensitivity and image sharpness that will allow front-line astronomical observations.

This contract was signed for the design, manufacturing and testing in Europe of two ATs and of the full set of on-site equipment for the 30 AT observing stations. An option for a third Auxiliary Telescope is also part of the contract. The delivery in Europe of the first AT is planned for June 2001 and the first observations with the first two ATs at Paranal are planned for early 2002.

Although the ultimate sensitivity of the VLTI will be obtained when combining the VLT 8.2-m telescopes, the Auxiliary Telescopes constitute an essential element of the VLTI for several reasons:

The following photos of a 1/20 scale model built by AMOS in response to the call for tender illustrate the main conceptual features of the VLTI Auxiliary Telescopes and the "Paranal Railway" system.

This photo shows a model of an Auxiliary Telescope during Observing Conditions. The 1.8-m telescope (with an Alt-Az mount, i.e. exactly like the Unit Telescopes) is rigidly anchored to the ground by means of a special interface. The light is directed via a series of mirrors (the Coudé Optical Train) to the bottom of the Telescope. From the Coudé Relay Optics it is sent on to the underground Delay Line Tunnel .

The AT Enclosure (telescope dome) consists of 2 x 3 segments and is here fully open. It protects the lower part of the Telescope structure from strong winds. The Enclosure is supported by the Transporter that also houses electronic cabinets and service modules for liquid cooling, air conditioning, auxiliary power, compressed air, etc.

This picture shows a model of an Auxiliary Telescope during Relocation from one observing station to another. The Transporter carries the Telescope via a rail network that connects all 30 stations.

The Relocation is a complex operation that involves quite a few steps. First, the Telescope inside the closed Enclosure is undocked from the ground and lifted by jacks that are located on the Transporter. The electrical cables to the station are disconnected and power is supplied by the on-board battery set. The Transporter is then unlocked and moved sideways so that the Coudé Relay Optics Box can be lifted up from inside the station. This box can be seen in the photo after it has been lifted on the left side of the Transporter. The lid that protects the station (the white octagon) is then placed on top of the station.

Next, the Transporter is moved along the rails to the chosen station. This movement may include a rail crossing at which the Transporter wheels are first lifted, then rotated by 90° and again placed on the tracks in the perpendicular direction. When reaching the desired station, the station lid is opened, the Coudé Relay Optics is lowered inside the station pit and the Telescope and Transporter are anchored to their respective foundations.

The positioning accuracy of the various mechanisms is so good that no local re-alignment should be necessary, although this can be done remotely from the control room before the next observation. During the Relocation itself, the control of the Transporter is done locally from a handset by one or two operators.

The Belgian company AMOS was founded in 1983 and is located in Liège. It has specialized in the design and construction of high-accuracy mechanical and opto-mechanical systems for space experiments, ground-support equipment, as well as mechanics and optics for ground-based telescopes.

AMOS's involvement in the VLT started already back in the late 1980's with a pre-study of the 8.2-m telescope fork. It also involved the study and production of the Seeing Monitor telescope (DIMM) that continuously measures the sky quality at Paranal, twelve Adaptors-Rotators for the four UTs, the M1 Carriage and the M1 Lifting Platform. In addition, AMOS was recently awarded the contract for the Washing Unit that will be used to clean the 8.2-m mirrors before re-coating.

The VLTI Auxiliary Telescopes have rather unusual characteristics:

The total mass of one AT system, including the Telescope structure, is just under 25 tonnes. The time to relocate between observing stations is in the worst case less than 3 hours. Despite the not insignificant mass, the positioning accuracy of the Telescope after relocation is better than ± 0.1 mm linear and ± 10 arcsec rotational displacement. To avoid unwanted air turbulence near the Telescope, the total heat dissipated close to the light path is less than 25 W. The thermal control of the 1.8-m primary mirror keeps it within ± 0.5 °C. The ATs can be operated with full performance in wind speeds up to 10 m/sec and has the same seismic survival characteristics as the UTs.

More details about the VLTI and its various components may also be found in the VLT White Book. 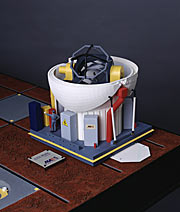 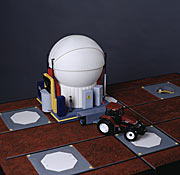 PR Image eso9832b
ESO and AMOS sign contract for the VLTI Auxiliary Telescopes
Send us your comments!
Subscribe to receive news from ESO in your language
Accelerated by CDN77
Terms & Conditions