One week after the explosion of a bright supernova (1987A) in the Large Magellanic Cloud (ESO 04/87), and after intensive observations at the European Southern Observatory and elsewhere in the southern hemisphere, it is now possible to draw several important conclusions about this unique event.

The supernova is located about 20 arcminutes (2/3 of the diameter of the Moon), southwest of the well-known Tarantula Nebula, a bright gaseous nebula in the Large Magellanic Cloud. It was first seen early on February 24 by I. Shelton at the University of Toronto station at the Las Campanas Observatory in Chile. Subsequent inspection of a colour photo, by chance obtained at the European Southern Observatory on February 23, 01:00 Universal Time (UT) did not show the supernova, but it is clearly seen on photos taken 8 hours later in Australia. The explosion must therefore have taken place during this time interval.

The star that exploded (the supernova progenitor) has been provisionally identified with a 12th magnitude, hot supergiant star with the designation Sanduleak -69 202. Close examination of earlier photographs have revealed that this star has two very close companions. From positional measurements, it is seen that one of these (2.5 arcseconds northwest of the main star) cannot be the progenitor. However, the other companion is less than 1 arcsecond from the main star and it is not yet possible to decide which of the two became the supernova.

The brightness of the supernova continued to rise for several days after the initial, rapid phase. On February 25, the visual magnitude was 4.5, and two days later, it had reached 4.3. But accurate photometric measurements from the last days indicate stagnation or even a slight decrease, so that it appears that the maximum in visual light may have been reached around February 28. This would imply a total increase of about 8 - 9 magnitudes, or that the supernova is about 2000 times brighter in visual light than its progenitor. This may seem much, but is nevertheless unexpectedly little for a supernova of Type II. As a matter of fact, had this supernova behaved as other Type II supernovae, it would have been expected to reach magnitude +1, about as much as the brightest stars. This has already led to theoretical speculations and again demonstrates that the supernova phenomenon is far from being fully understood.

The colour of 1987A has become significantly redder since it was first observed. From the time of discovery until now, there has been a continuous, rather rapid decrease of the ultraviolet radiation, and somewhat less of the blue. Contrarily, the object has brightened in the red and infrared. This effect is explained by the decreasing temperature. Infrared photometry on March 2 shows that the temperature of the emitting material at this time was about 6000 degrees.

Immediately after discovery, spectra of medium resolution were rather featureless and showed no identifiable spectral lines, but later several broad spectral features have become visible. They are first of all the Balmer lines of hydrogen, which exhibit blue-shifted absorption and red-shifted emission features. This is typical for a Type II supernova and is due to emission from a rapidly expanding shell of material around the exploding star. The expansion velocity is around 17.400 km/sec. Rapid changes of this spectrum have been observed at ESO, probably reflecting violent motions in the surrounding gas.

Infrared spectra were obtained on March 1 with the ESO 1m photometric telescope. This is the first time that such spectra of a supernova have ever become available. Many emission lines are seen, including those of hydrogen and helium and the time-consuming interpretation of these spectra has now started at ESO.

Very high dispersion spectra were obtained with the ESO Coudé Echelle Spectrograph at the CAT telescope. They show - also for the first time - a large number of narrow absorption lines, which originate in interstellar clouds in the LMC and in our Galaxy (the Milky Way), and also in intergalactic clouds between the two galaxies. More than 20 such lines belong to ionized Calcium, around 13 to neutral Sodium and 2 to neutral Potassium. This unique observation will allow a study, for instance of the chemical composition of these clouds.

A search was made for very rapid variations in brightness (flickering) to see whether a rapidly rotating neutron star could be detected. It is known that such stars are left-overs by other supernovae and they are observed as pulsars. These objects are extremely dense; a mass similar to that of the Sun is contained within a diameter of 20 kilometres or less. Ultra-fast photometry at ESO of supernova 1987A has not yet detected such variations, but as the envelope expands, the possibilities for a successful search become larger.

In view of this extraordinary event, the telescope schedules at ESO La Silla were changed and all observers switched over to the supernova with great enthusiasm. Preliminary reports with more details than those given in the present Press Release will be published in the March issue of ESO's journal The Messenger. It is also expected that several articles will appear shortly in the scientific journals. A scientific Workshop on "Supernova 1987A in the LMC'' (Observations and Theory) will be held at the ESO Headquarters in Garching during early September 1987.

In the last decades, supernovae have been observed in other galaxies which were always more than one hundred times fainter than this one in the LMC. While studies made with large telescopes at ESO La Silla and elsewhere have yielded interesting data, no very high resolution studies were possible due to lack of light. However, with the full light gathering power of the future 16 m ESO Very Large Telescope (ESO Press Release eso8609), now being planned, fainter supernova in other galaxies, as well as some stars in the LMC will be observed with the same spectroscopic resolution as has been possible for supernova 1987A in LMC. This supernova thereby gives us a preview of the discoveries that can be made with the Very Large Telescope.

This Press Release is accompanied by three pictures:

B/W photo from 1977 showing the sky area of the supernova event, with the progenitor indicated,

B/W photo from 25 February 1987 of the same area and with the same scale, now showing the very bright supernova, and

Colour picture of the LMC, obtained on 25 February 1987, and clearly showing the entire LMC galaxy and the supernova near the Tarantula Nebula.

Additional pictures may become available from ESO at a later date. Copies of the March 1987 Messenger issue will be sent on request after March 15. 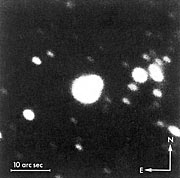 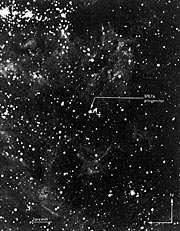 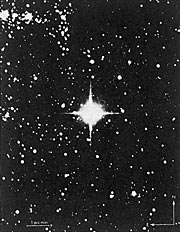 PR Image eso8705e
Bright supernova in the Large Magellanic Cloud (LMC)
Send us your comments!
Subscribe to receive news from ESO in your language
Accelerated by CDN77
Terms & Conditions