Young Stars Take a Turn in the Spotlight

ESO’s New Technology Telescope (NTT) has captured a striking image of the open cluster NGC 2100. This brilliant star cluster is around 15 million years old, and located in the Large Magellanic Cloud, a nearby satellite galaxy of the Milky Way. The cluster is surrounded by glowing gas from the nearby Tarantula Nebula.

Observers often overlook NGC 2100 because of its close proximity to the impressive Tarantula Nebula (eso0650) and the super star cluster RMC 136 (eso1030). The glowing gas of the Tarantula Nebula even tries to steal the limelight in this image — the bright colours here are the nebula’s outskirts. This new picture was created from exposures through several different colour filters using the EMMI instrument [1] on the New Technology Telescope at ESO’s La Silla Observatory in Chile. The stars are shown in their natural colours, while light from glowing ionised hydrogen (shown here in red) and oxygen (shown in blue) is overlaid.

The colours that appear in nebulae depend on the temperatures of the stars lighting them up. The hot young stars in the Tarantula Nebula, which lie in the super star cluster RMC 136, are above and to the right of this image, and are powerful enough to cause oxygen to glow [2] showing up as blue nebulosity in this picture. Below NGC 2100 the red glow indicates either that the outer reaches of the influence of the hot stars of RMC 136 has been reached, or that cooler, and older, stars, that are only able to excite hydrogen are the dominant influence in this region. The stars that make up NGC 2100 are older and less energetic, and hence have little or no nebulosity associated with them.

NGC 2100 is an open cluster, which means its stars are relatively loosely bound by gravity. These clusters have a lifespan measured in tens or hundreds of millions of years, as they eventually disperse through gravitational interaction with other bodies. Globular clusters, which look similar to the untrained eye, contain many more older stars and are much more tightly bound, and so have far longer lifespans: many globular clusters have been measured to be almost as old as the Universe itself. So while NGC 2100 might be older than its neighbours in the Large Magellanic Cloud, it is still a youngster by the standards of star clusters.

Data for this image of the under-appreciated young cluster were selected from the depths of ESO’s data archives by Hidden Treasures entrant David Roma as part of the astrophotography competition held by ESO in 2010 [3].

[1] EMMI stands for ESO Multi Mode Instrument. It is both a camera for imaging and a spectrograph.

[2] Most of the glow from oxygen comes from oxygen atoms that have lost two electrons. This strong emission is very common in nebulae but was mysterious to early astronomical spectroscopists and was initially thought to be coming from a new element given the name Nebulium.

[3] ESO’s Hidden Treasures 2010 competition gave amateur astronomers the opportunity to search through ESO’s vast archives of astronomical data, hoping to find a well-hidden gem that needed polishing by the entrants. To find out more about Hidden Treasures, visit http://www.eso.org/public/events/hiddentreasures/. 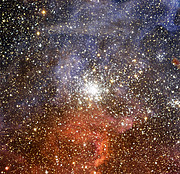 PR Video eso1133a
Zooming in on the star cluster NGC 2100 in the Large Magellanic Cloud
Send us your comments!
Subscribe to receive news from ESO in your language
Accelerated by CDN77
Terms & Conditions