Double Engine for a Nebula

ESO has just released a stunning new image of a field of stars towards the constellation of Carina (the Keel). This striking view is ablaze with a flurry of stars of all colours and brightnesses, some of which are seen against a backdrop of clouds of dust and gas. One unusual star in the middle, HD 87643, has been extensively studied with several ESO telescopes, including the Very Large Telescope Interferometer (VLTI). Surrounded by a complex, extended nebula that is the result of previous violent ejections, the star has been shown to have a companion. Interactions in this double system, surrounded by a dusty disc, may be the engine fuelling the star’s remarkable nebula.

The new image, showing a very rich field of stars towards the Carina arm of the Milky Way, is centred on the star HD 87643, a member of the exotic class of B[e] stars [1]. It is part of a set of observations that provide astronomers with the best ever picture of a B[e] star.

The image was obtained with the Wide Field Imager (WFI) attached to the MPG/ESO 2.2-metre telescope at the 2400-metre-high La Silla Observatory in Chile. The image shows beautifully the extended nebula of gas and dust that reflects the light from the star. The central star’s wind appears to have shaped the nebula, leaving bright, ragged tendrils of gas and dust. A careful investigation of these features seems to indicate that there are regular ejections of matter from the star every 15 to 50 years.

A team of astronomers, led by Florentin Millour, has studied the star HD 87643 in great detail, using several of ESO’s telescopes. Apart from the WFI, the team also used ESO’s Very Large Telescope (VLT) at Paranal.

At the VLT, the astronomers used the NACO adaptive optics instrument, allowing them to obtain an image of the star free from the blurring effect of the atmosphere. To probe the object further, the team then obtained an image with the Very Large Telescope Interferometer (VLTI).

The sheer range of this set of observations, from the panoramic WFI image to the fine detail of the VLTI observations, corresponds to a zoom-in factor of 60 000 between the two extremes. The astronomers found that HD 87643 has a companion located at about 50 times the Earth–Sun distance and is embedded in a compact dust shell. The two stars probably orbit each other in a period between 20 and 50 years. A dusty disc may also be surrounding the two stars.

The presence of the companion could be an explanation for the regular ejection of matter from the star and the formation of the nebula: as the companion moves on a highly elliptical orbit, it would regularly come very close to HD 87643, triggering an ejection.

[1]: B[e] stars are stars of spectral type B, with emission lines in their spectra, hence the "e". They are surrounded by a large amount of dust.

The work on HD 87643 has been published in a paper to appear in Astronomy and Astrophysics: A binary engine fueling HD 87643’s complex circumstellar environment using AMBER/VLTI imaging, by F. Millour et al. 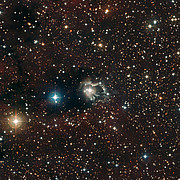 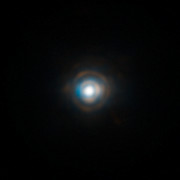 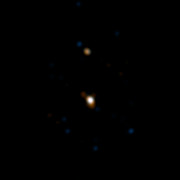 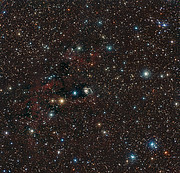 PR Video eso0928b
ESOcast 9: Celestial Tango Makes for a Gorgeous Nebula
Send us your comments!
Subscribe to receive news from ESO in your language
Accelerated by CDN77
Terms & Conditions