As is now the tradition, the European Southern Observatory looks back at the exciting moments of last year. 2008 was in several aspects an exceptionally good year. Over the year, ESO's telescopes provided data for more than 700 scientific publications in refereed journals, making ESO the most productive ground-based observatory in the world.

Austria signed the agreement to join the other 13 ESO member states, while the year marked the 10th anniversary of first light for ESO’s “perfect science machine”, the Very Large Telescope. The ALMA project, for which ESO is the European partner, had a major milestone in December, as the observatory was equipped with its first antenna (eso0849). Also the Atacama Pathfinder Experiment (APEX) telescope impressed this year with some very impressive and publicly visible results.

Highlights came in many fields: Astronomers for instance used the Very Large Telescope (VLT) to discover and image a probable giant planet long sought around the star Beta Pictoris. This is now the eighth extrasolar planet to have been imaged since the VLT imaged the first extrasolar planet in 2004 (three of eight were imaged with VLT). The VLT also enabled three students to confirm the nature of a unique planet (eso0845). This extraordinary find, which turned up during their research project, is a planet about five times as massive as Jupiter. This is the first planet discovered orbiting a fast-rotating hot star.

With the VLT and another recent instrument, CRIRES, astronomers have also been able to study planet-forming discs around young Sun-like stars in unsurpassed detail, clearly revealing the motion and distribution of the gas in the inner parts of the disc, possibly implying the presence of giant planets.

As the result of an impressive 16-year long study, that combines data obtained with ESO’s New Technology Telescope and the VLT, a team of German astronomers has produced the most detailed view ever of the surroundings of the monster lurking at our Galaxy's heart — a supermassive black hole (eso0846). Combining data from APEX and the VLT, another team studied the violent flares coming from this region. The flares are the likely signatures of material being torn apart by the black hole.

Making such science discoveries doesn’t happen without the best technological tools. ESO is constantly upgrading its battery of instruments and telescopes on Cerro Paranal, home of the VLT. For example, the PRIMA instrument for the VLT Interferometer (VLTI) recently saw first light (eso0829). When fully operational, PRIMA will boost the capabilities of the VLTI to see sources much fainter than any previous interferometers, and determine positions on the sky better than any other existing astronomical facility. The Multi-Conjugate Adaptive Optics Demonstrator (MAD) prototype, mounted on the VLT, provided astronomers with the sharpest image of the full disc of planet Jupiter ever taken from the Earth’s surface.

The future VISTA telescope on Paranal also received its record-curved 4.1-metre mirror, paving the way for unique surveys of the southern sky in the infrared (ESO Press Release eso0810). In preparation for other instruments of the future, staff at ESO joined with quantum optics specialists to develop a new calibration system for ultra-precise spectrographs (ESO Press Release eso0826).

Given the presence of such state-of-the-art technology, it is perhaps no surprise that the crucial scenes from the latest James Bond sequel were filmed at Paranal (even though the director was really more interested in blowing up the Residencia, the lodge where staff and visitors can relax after working at one of the world’s most advanced ground-based astronomical observatories). In March, a movie crew of 300 people, including the principal actors, were shooting at Paranal (eso0838).

On the outreach side, ESO’s series of video podcasts, the ESOcast, premiered with the first three episodes. More than two thousand new and historic ESO images were put online in the ESO image archive as well as more than 300 hundred videos, mostly in High Definition. The work to digitise ESO’s heritage will continue in 2009.

Doubtless just as many exciting results will be presented this year too. Especially as 2009 has been officially declared the International Year of Astronomy (IYA) by the UN, UNESCO and the International Astronomical Union. The Year is coordinated from the global IYA Secretariat hosted by ESO. In addition ESO leads a number of global and regional activities. 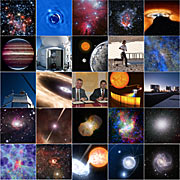 PR Image eso0901a
ESO highlights in 2008
Send us your comments!
Subscribe to receive news from ESO in your language
Accelerated by CDN77
Terms & Conditions