Powerful nearby supernova caught by web of telescopes

Over a decade after it exploded, one of the nearest supernovae in the last 25 years has been identified. This result was made possible by combining data from the vast online archives from many of the world’s premier telescopes.

The supernova, called SN 1996cr, was first singled out in 2001 by Franz Bauer. Bauer noticed a bright, variable source in the Circinus spiral galaxy, using NASA's Chandra X-ray Observatory. Although the source displayed some exceptional properties Bauer and his Penn State colleagues could not identify its nature confidently at the time.

It was not until years later that Bauer and his team were able to confirm that this object was a supernova. Clues from a spectrum obtained by ESO’s Very Large Telescope led the team to start the real detective work of searching through data from 18 different telescopes, both ground- and space-based, nearly all of which existed. Because this object was found in an interesting nearby galaxy, the public archives of these telescopes contained abundant observations.

The data show that SN 1996cr is among the brightest supernovae ever seen in radio and X-rays. It also bears many striking similarities to the famous supernova SN 1987A, which occurred in a neighbouring galaxy only 160 000 light-years from Earth.

“This supernova appears to be a wild cousin of SN 1987A,” says Bauer. “The two look alike in many ways, except this newer supernova is intrinsically a thousand times brighter in radio and X-rays.”

Visible-light images from the archives of the Anglo-Australian Telescope in Australia show that SN 1996cr exploded sometime between 28 February 1995 and 15 March 1996, but it is the only one of the five nearest supernovae of the last 25 years that was not seen shortly after the explosion.

Other major X-ray observatories in orbit like ROSAT and ASCA did not detect SN 1996cr, but since it was first detected by Chandra in 2001 it has become steadily brighter. Previously, SN 1987A was the only known supernova with an X-ray output that increased over time.

“It’s a bit of a coup to find SN 1996cr like this, and we could never have nailed it without the serendipitous data taken by all of these telescopes. We've truly entered a new era of ‘internet astronomy’,” said Bauer.

The combined data, in conjunction with theoretical work, have led the team to develop a model for the explosion. Before the parent star exploded, it cleared out a large cavity in the surrounding gas, either via a strong wind or from an outburst from the star late in its life. So the blast wave from the explosion itself could expand relatively unimpeded into this cavity. Once the blast wave hit the dense material surrounding SN1996cr, the impact caused the system to glow brightly in X-ray and radio emission. The X-ray and radio emission from SN 1987A is probably fainter because the surrounding material is less compact.

Astronomers think that both SN 1987A and SN 1996cr show evidence for these pre-explosion clear-outs by a star doomed to explode. Having two nearby examples suggests that this type of activity could be relatively common during the death of massive stars.

“Not only does our work suggest that SN 1987A isn’t as unusual as previously thought, but it also teaches us more about the tremendous upheavals that massive stars can undergo over their lifetimes,” said co-author Vikram Dwarkadas of the University of Chicago.

The Circinus galaxy is indeed a rather interesting object, with rings of gas being ejected from the galaxy. It is 13 million light-years away from the Milky Way. 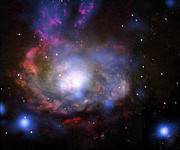 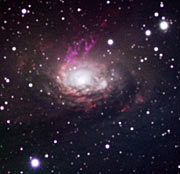 PR Image eso0832d
Circinus galaxy before and after SN 1996cr appeared
Send us your comments!
Subscribe to receive news from ESO in your language
Accelerated by CDN77
Terms & Conditions