An image based on data taken with ESO's Very Large Telescope reveals a triplet of galaxies intertwined in a cosmic dance.

The three galaxies, catalogued as NGC 7173 (top), 7174 (bottom right) and 7176 (bottom left), are located 106 million light-years away towards the constellation of Piscis Austrinus (the 'Southern Fish').

NGC 7173 and 7176 are elliptical galaxies, while NGC 7174 is a spiral galaxy with quite disturbed dust lanes and a long, twisted tail. This seems to indicate that the two bottom galaxies - whose combined shape bears some resemblance to that of a sleeping baby - are currently interacting, with NGC 7176 providing fresh material to NGC 7174. Matter present in great quantity around the triplet's members also points to the fact that NGC 7176 and NGC 7173 have interacted in the past.

Astronomers have suggested that the three galaxies will finally merge into a giant 'island universe', tens to hundreds of times as massive as our own Milky Way.

The triplet is part of a so-called 'Compact Group', as compiled by Canadian astronomer Paul Hickson in the early 1980s. The group, which is the 90th entry in the catalogue and is therefore known as HCG 90, actually contains four major members. One of them - NGC 7192 - lies above the trio, outside of this image, and is another peculiar spiral galaxy.

Compact groups are small, relatively isolated, systems of typically four to ten galaxies in close proximity to one another. Another striking example is Robert's Quartet. Compact groups are excellent laboratories for the study of galaxy interactions and their effects, in particular the formation of stars.

As the striking image reveals, there are many other galaxies in the field. Some are distant ones, while others seem to be part of the family. Studies made with other telescopes have indeed revealed that the HCG 90 group contains 16 members, most of them much smaller in size than the four members with an entry in the NGC catalogue.

A list of all the work about this group of galaxies can be for example obtained through the Simbad astronomical database.

Elliptical galaxies are smooth and featureless entities, often composed of older, low mass stars, which produce very few new stars. Spiral galaxies consist of a flat, rotating disc of stars, gas and dust, and a central concentration of stars known as the bulge. The spiral arms are sites of ongoing star formation. Our own Milky Way is a spiral galaxy. 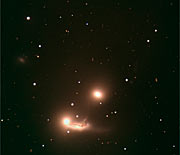