2009 to be the International Year of Astronomy

Yesterday, the 62nd General Assembly of the United Nations proclaimed 2009 the International Year of Astronomy, with the aim of increasing awareness among the public of the importance of astronomical sciences and of promoting widespread access to new knowledge and experiences of astronomical observation.

The year 2009 is chosen to commemorate the 400 years since renowned scientist Galileo Galilei pointed a telescope towards the sky. This led him to discover, among other things, the four major satellites of Jupiter, the mountains and craters on the Moon, as well as sunspots. More importantly perhaps, Galileo's use of the telescope substantiated Copernicus' heliocentric model of our Solar System, paving the way for modern science, and for four hundred years of amazing discoveries in astronomy.

Nowadays, telescopes on the ground and in space explore the Universe, 24 hours a day, across the whole electromagnetic spectrum. And indeed, today, astronomy stands out as one of the most modern and dynamic sciences, using some of the most advanced technologies and sophisticated techniques available to scientists.

The United Nations Resolution was submitted by Italy, Galileo Galilei's home country, gaining full support of the General Assembly's Second Committee. The International Year of Astronomy 2009 (IYA 2009) is an initiative by the International Astronomical Union (IAU) and UNESCO.

"This is an important step in furthering the interest of the public in what is arguably the oldest of all sciences: astronomy," says Tim de Zeeuw, the ESO Director General. "I am very proud because ESO and its member states have been actively working together with the IAU and UNESCO to help achieve this result."

In addition to a wide array of activities planned both at the local and international level, ESO is also hosting the IYA 2009 Secretariat at its Headquarters in Garching.

The UN has designated "the United Nations Educational, Scientific and Cultural Organization as the lead agency and focal point for the Year, and invites it to organize, in this capacity, activities to be realized during the Year, in collaboration with other relevant entities of the United Nations system, the International Astronomical Union, the European Southern Observatory and astronomical societies and groups throughout the world." 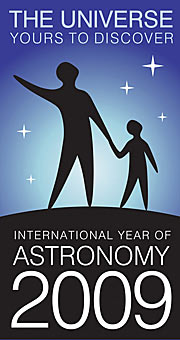 PR Image eso0754a
2009 to be the International Year of Astronomy
Send us your comments!
Subscribe to receive news from ESO in your language
Accelerated by CDN77
Terms & Conditions