A Galaxy for Science and Research

During his visit to ESO's Very Large Telescope at Paranal, the European Commissioner for Science and Research, Janez Potočnik, participated in an observing sequence and took images of a beautiful spiral galaxy.

The visit took place on 27 October and the Commissioner observed with one of the FORS instruments on Antu, the first 8.2-m Unit Telescope of the VLT.

"Two hours bus ride from the nearest town, Antofagasta, in the middle of nowhere and at 2 600 m altitude, rises a state of the art astronomical observatory at which scientists from across Europe venture to exploit some of the most advanced technologies and sophisticated techniques available within astronomy. One of the facilities is the VLT, the Very Large Telescope, with which, together with the other telescopes, scientists can study objects at the far edge of the Universe," wrote Potočnik on his blog.

Known until now as a simple number in a catalogue, NGC 134, the 'Island in the Universe' that was observed by the Commissioner is replete with remarkable attributes, and the VLT has clapped its eyes on them. Just like our own Galaxy, NGC 134 is a barred spiral with its spiral arms loosely wrapped around a bright, bar-shaped central region.

One feature that stands out is its warped disc. While a galaxy's disc is often pictured as a flat structure of gas and stars surrounding the galaxy's centre, a warped disc is a structure that, when viewed sideways, resembles a bent record album left out too long in the burning Sun.

Warps are actually not atypical. More than half of the spiral galaxies do show warps one way or another, and our own Milky Way also has a small warp.

Many theories exist to explain warps. One possibility is that warps are the aftermath of interactions or collisions between galaxies. These can also produce tails of material being pulled out from the galaxy. The VLT image reveals that NGC 134 also appears to have a tail of gas stripped from the top edge of the disc.

So did NGC 134 have a striking encounter with another galaxy in the past? Or is some other galaxy out there exerting a gravitational pull on it? This is a riddle astronomers need to solve.

The superb VLT image also shows that the galaxy has its fair share of ionised hydrogen regions (HII regions) lounging along its spiral arms. Seen in the image as red features, these are glowing clouds of hot gas in which stars are forming. The galaxy also shows prominent dark lanes of dust across the disc, obscuring part of the galaxy's starlight.

Studying galaxies like NGC 134 is an excellent way to learn more about our own Galaxy.

NGC 134 was discovered by Sir John Herschel at the Cape of Good Hope and is located in the Sculptor southern constellation. The galaxy is located about 60 million light-years away - when the light that was captured by the VLT originally left the galaxy, a dramatic episode of mass extinction had led to the disappearance of dinosaurs on Earth, paving the way for the appearance of mammals and later specifically of humans, who have built unique high-tech installations in the Atacama desert to satisfy their curiosity about the workings of the Universe. Still, NGC 134 is not very far away, by cosmological standards. It is the dominant member of a small group of galaxies that belongs to the Virgo or Local Supercluster and is one of the 200 brightest galaxies in our skies. 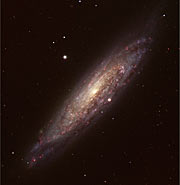