LABOCA in Service at APEX

The world's largest bolometer camera for submillimetre astronomy is now in service at the 12-m APEX telescope, located on the 5100m high Chajnantor plateau in the Chilean Andes. LABOCA was specifically designed for the study of extremely cold astronomical objects and, with its large field of view and very high sensitivity, will open new vistas in our knowledge of how stars form and how the first galaxies emerged from the Big Bang.

"A large fraction of all the gas in the Universe has extremely cold temperatures of around minus 250 degrees Celsius, a mere 20 degrees above absolute zero," says Karl Menten, director at the Max Planck Institute for Radioastronomy (MPIfR) in Bonn, Germany, that built LABOCA. "Studying these cold clouds requires looking at the light they radiate in the submillimetre range, with very sophisticated detectors."

Astronomers use bolometers for this task, which are, in essence, thermometers. They detect incoming radiation by registering the resulting rise in temperature. More specifically, a bolometer detector consists of an extremely thin foil that absorbs the incoming light. Any change of the radiation's intensity results in a slight change in temperature of the foil, which can then be registered by sensitive electronic thermometers. To be able to measure such minute temperature fluctuations requires the bolometers to be cooled down to less than 0.3 degrees above absolute zero, that is below minus 272.85 degrees Celsius.

"Cooling to such low temperatures requires using liquid helium, which is no simple feat for an observatory located at 5100m altitude," says Carlos De Breuck, the APEX instrument scientist at ESO.

Nor is it simple to measure the weak temperature radiation of astronomical objects. Millimetre and submillimetre radiation opens a window into the enigmatic cold Universe, but the signals from space are heavily absorbed by water vapour in the Earth's atmosphere. "It is a bit as if you were trying to see stars during the day," explains Axel Weiss of the MPIfR and leader of the team that installed LABOCA on APEX.

This is why telescopes for this kind of astronomy must be built on high, dry sites, and why the 5100m high plateau at Chajnantor in the extremely dry Atacama Desert was chosen. Even under such optimal conditions the heat from Earth's atmosphere is still a hundred thousand times more intense than the tiny astronomical signals from distant galaxies. Very special software is required to filter such weak signals from the overwhelming disturbances.

LABOCA (LArge BOlometer Camera) and its associated software were developed by MPIfR. "Since so far there are no commercial applications for such instruments we have to develop them ourselves," explains Ernst Kreysa, from MPIfR and head of the group that built the new instrument.

A bolometer camera combines many tiny bolometer units into a matrix, much like the pixels are combined in a digital camera. LABOCA observes at the submillimetric wavelength of 0.87 mm, and consists of 295 channels, which are arranged in 9 concentric hexagons around a central channel. The angular resolution is 18.6 arcsec, and the total field of view is 11.4 arcmin, a remarkable size for instruments of this kind.

"The first astronomical observations with LABOCA have revealed its great potential. In particular, the large number of LABOCA's detectors is an enormous improvement over earlier instruments," says Giorgio Siringo from MPIfR and member of the LABOCA team. "LABOCA is the first camera that will allow us to map large areas on the sky with high sensitivity."

The Atacama Pathfinder Experiment (APEX) where LABOCA is installed is a new-technology 12-m telescope, based on an ALMA prototype antenna, and operating at the ALMA site. It has modified optics and an improved antenna surface accuracy, and is designed to take advantage of the excellent sky transparency working with wavelengths in the 0.2 to 1.4 mm range.

"APEX is located a mere 2 km from the centre of the future ALMA array. The new LABOCA camera will be very complementary to ALMA, as its very wide view will find thousands of galaxies which will be observed in great detail with ALMA," says De Breuck.

APEX is a collaboration between the Max Planck Institute for Radioastronomy, Onsala Space Observatory and ESO. 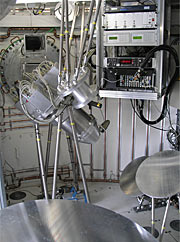 PR Image eso0735b
The galactic HII region RCW 120
Send us your comments!
Subscribe to receive news from ESO in your language
Accelerated by CDN77
Terms & Conditions