The Gobbling Dwarf that Exploded

A unique set of observations, obtained with ESO's VLT, has allowed astronomers to find direct evidence for the material that surrounded a star before it exploded as a Type Ia supernova. This strongly supports the scenario in which the explosion occurred in a system where a white dwarf is fed by a red giant.

Because Type Ia supernovae are extremely luminous and quite similar to one another, these exploding events have been used extensively as cosmological reference beacons to trace the expansion of the Universe.

However, despite significant recent progress, the nature of the stars that explode and the physics that governs these powerful explosions have remained very poorly understood.

In the most widely accepted models of Type Ia supernovae the pre-explosion white dwarf star orbits another star. Due to the close interaction and the strong attraction produced by the very compact object, the companion star continuously loses mass, 'feeding' the white dwarf. When the mass of the white dwarf exceeds a critical value, it explodes.

The team of astronomers studied in great detail SN 2006X, a Type Ia supernova that exploded 70 million light-years away from us, in the splendid spiral Galaxy Messier 100. Their observations led them to discover the signatures of matter lost by the normal star, some of which is transferred to the white dwarf.

The observations were made with the Ultraviolet and Visual Echelle Spectrograph (UVES), mounted at ESO's 8.2-m Very Large Telescope, on four different occasions, over a time span of four months. A fifth observation at a different time was secured with the Keck telescope in Hawaii. The astronomers also made use of radio data obtained with NRAO's Very Large Array as well as images extracted from the NASA/ESA Hubble Space Telescope archive.

"No Type Ia supernova has ever been observed at this level of detail for more than four months after the explosion," says Ferdinando Patat, lead author of the paper reporting the results in this week's issue of Science Express, the online version of the Science research journal. "Our data set is really unique."

The most remarkable findings are clear changes in the absorption of material, which has been ejected from the companion giant star. Such changes of interstellar material have never been observed before and demonstrate the effects a supernova explosion can have on its immediate environment. The astronomers deduce from the observations the existence of several gaseous shells (or clumps) which are material ejected as stellar wind from the giant star in the recent past.

"The material we have uncovered probably lies in a series of shells having a radius of the order of 0.05 light-years, or roughly 3 000 times the distance between Earth and the Sun", explains Patat. "The material is moving with a velocity of 50 km/s, implying that the material would have been ejected some 50 years before the explosion."

Such a velocity is typical for the winds of red giants. The system that exploded was thus most likely composed of a white dwarf that acted as a giant 'vacuum cleaner', drawing gas off its red giant companion. In this case however, the cannibal act proved fatal for the white dwarf. This is the first time that clear and direct evidence for material surrounding the explosion has been found.

"One crucial issue is whether what we have seen in SN 2006X represents the rule or is rather an exceptional case," wonders Patat. "But given that this supernova has shown no optical, UV and radio peculiarity whatsoever, we conclude that what we have witnessed for this object is a common feature among normal SN Ia. Nevertheless, only future observations will give us answers to the many new questions these observations have posed to us."

During Type Ia supernova events, remnants of stars with an initial mass of up to a few times that of the Sun (so-called "white dwarf stars") explode, leaving nothing behind but a rapidly expanding cloud of "stardust". Their peak brightness rivals that of their parent galaxy, hence qualifying them as prime cosmic yardsticks. Type Ia supernovae are apparently quite similar to one another. This provides them a very useful role as 'standard candles' that can be used to measure cosmic distances. Astronomers have exploited this fortunate circumstance to study the expansion history of our Universe, leading to the conclusion that the Universe is expanding at an accelerating rate.

White dwarfs are Earth-size, hot and extremely dense stars that represent the end products of the evolution of solar-like stars. During most of their life, such stars draw most of their energy from the transformation of hydrogen into helium. But at some moment, the hydrogen fuel will run out: this phase - still many billions of years into the future for the Sun - signals the beginning of profound, increasingly rapid changes in the star which will ultimately lead to its death. The star dramatically increases in radius, becoming a red giant. Later, it will expel huge quantities of gas and appear as a planetary nebula. After the planetary nebula has dissipated into interstellar space, the star left behind is a white dwarf.

These results are reported in a paper in Science Express published on 12 July 2007 ("Detection of circumstellar material in a normal Type Ia Supernova", by F. Patat et al.). 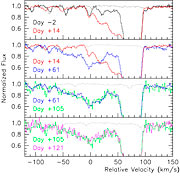 PR Image eso0731a
Evolution of SN 2006X spectrum
Send us your comments!
Subscribe to receive news from ESO in your language
Accelerated by CDN77
Terms & Conditions