Free from the Atmosphere

An artificial, laser-fed star now shines regularly over the sky of Paranal, home of ESO's Very Large Telescope, one of the world's most advanced large ground-based telescopes. This system provides assistance for the adaptive optics instruments on the VLT and so allows astronomers to obtain images free from the blurring effect of the atmosphere, regardless of the brightness and the location on the sky of the observed target. Now that it is routinely offered by the observatory, the skies seem much sharper to astronomers.

In order to counteract the blurring effect of Earth's atmosphere, astronomers use the adaptive optics technique. This requires, however, a nearby reference star that has to be relatively bright, thereby limiting the area of the sky that can be surveyed. To surmount this limitation, astronomers now use at Paranal a powerful laser that creates an artificial star, where and when they need it.

Two of the Adaptive Optics (AO) science instruments at the Paranal observatory, NACO and SINFONI, have been upgraded to work with the recently installed Laser Guide Star (LGS; see ESO Press Release eso0607) and have delivered their first scientific results. This achievement opens astronomers' access to a wealth of new targets to be studied under the sharp eyes of AO.

"These unique results underline the advantage of using a Laser Guide Star with Adaptive Optics instruments, since they could not be obtained with Natural Guide Stars," says Norbert Hubin, head of the Adaptive Optics group at ESO. "This is also a crucial milestone towards the multi-laser systems ESO is designing for the VLT and the future E-ELT" (see e.g. ESO Press Release eso0719).

The Laser Guide Star System installed at Paranal uses the PARSEC dye laser developed by MPE-Garching and MPIA-Heidelberg, while the launch telescope and the laser laboratory was developed by ESO.

"It is great to see the whole system working so well together," emphasises Richard Davies, project manager of the PARSEC laser.

"To test the laser guide star adaptive optics system to its limits, and even beyond, we observed a number of galaxies, ranging from a close neighbour to one that is seen when the universe was very young," explains Markus Kasper, the NACO Instrument Scientist at ESO.

The first objects that were observed are interacting galaxies. The images obtained reveal exquisite details, and have a resolution comparable to that of the Hubble Space Telescope. In one case, it was possible to derive for the first time the motion of the stars in two merging galaxies, showing that there are two counter-rotating discs of stars.

The astronomers then turned the laser to a galaxy called K20-ID5 which is at a redshift of 2.2 - we are seeing this galaxy when the universe was less than 1/3 of its current age. The image obtained with NACO shows that the stars are concentrated in a much more compact region than the gas.

"These observations are both remarkable and exciting," declares Kasper. "They are the first time that it has been possible to trace in such detail the distributions of both the stars and the gas at an epoch where we are witnessing the formation of galaxies similar to our own Milky Way."

At the opposite extreme, much nearer to home, LGS-AO observations were made of the active galaxy NGC 4945. The new LGS observations with NACO resolved the central parts into a multitude of individual stars.

"It is in galaxies such as these where we can really quantify the star formation history in the vicinity of the nucleus, that we can start to piece together the puzzle of how gas is accreted onto the supermassive black hole, and understand how and when these black holes light up so brightly," says Davies.

Still closer to home, the LGS system can also be applied to solar system objects, such as asteroids or satellites, but also to the study of particular regions of spatially extended bodies like the polar regions of giant planets, where aurora activity is concentrated. During their science verification, the scientists turned the SINFONI instrument with the LGS to a Trans-Neptunian Object, 2003 EL 61. The high image contrast and sensitivity obtained with the use of the LGS mode permit the detection of the two faint satellites known to orbit the TNO.

"From such observations one can study the chemical composition of the surface material of the TNO and its satellites (mainly crystalline water ice), estimate their surface properties and constrain their internal structure," explains Christophe Dumas, from ESO.

Normally, the achievable image sharpness of a ground-based telescope is limited by the effect of atmospheric turbulence. This drawback can be surmounted with adaptive optics, allowing the telescope to produce images that are as sharp as if taken from space. This means that finer details in astronomical objects can be studied, and also that fainter objects can be observed. In order to work, adaptive optics needs a nearby reference star that has to be relatively bright, thereby limiting the area of the sky that can be surveyed to a few percent only. To overcome this limitation, astronomers use a powerful laser that creates an artificial star, where and when they need it.

The laser beam takes advantage of the layer of sodium atoms that is present in Earth's atmosphere at an altitude of 90 kilometres. Shining at a well-defined wavelength the laser makes it glow. The laser is launched from Yepun, the fourth 8.2-m Unit Telescope of the Very Large Telescope, producing an artificial star. Despite this star being about 20 times fainter than the faintest star that can be seen with the unaided eye, it is bright enough for the adaptive optics to measure and correct the atmosphere's blurring effect.
Compared to a normal star, this artificial star has some differing properties that the associated Laser Guide Star (LGS) Adaptive Optics (AO) system has to be able to cope with.
A press release, in English and German, is also available from the Max-Planck Institute. 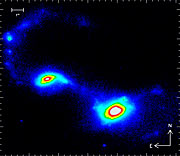 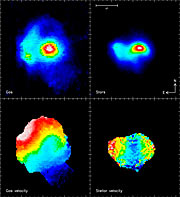 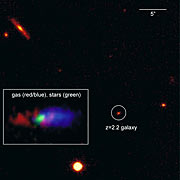 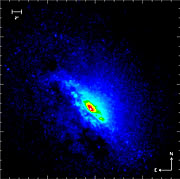 PR Image eso0727e
The active galaxy NGC 4945
Send us your comments!
Subscribe to receive news from ESO in your language
Accelerated by CDN77
Terms & Conditions