Chronicle of a Death Foretold

Using ESO's VLTI on Cerro Paranal and the VLBA facility operated by NRAO, an international team of astronomers has made what is arguably the most detailed study of the environment of a pulsating red giant star. They performed, for the first time, a series of coordinated observations of three separate layers within the star's tenuous outer envelope: the molecular shell, the dust shell, and the maser shell, leading to significant progress in our understanding of the mechanism of how, before dying, evolved stars lose mass and return it to the interstellar medium.

S Orionis (S Ori) belongs to the class of Mira-type variable stars. It is a solar-mass star that, as will be the fate of our Sun in 5 billion years, is nearing its gloomy end as a white dwarf. Mira stars are very large and lose huge amounts of matter. Every year, S Ori ejects as much as the equivalent of Earth's mass into the cosmos.

"Because we are all stardust, studying the phases in the life of a star when processed matter is sent back to the interstellar medium to be used for the next generation of stars, planets... and humans, is very important," said Markus Wittkowski, lead author of the paper reporting the results. A star such as the Sun will lose between a third and half of its mass during the Mira phase.

S Ori pulsates with a period of 420 days. In the course of its cycle, it changes its brightness by a factor of the order of 500, while its diameter varies by about 20%.

Although such stars are enormous - they are typically larger than the current Sun by a factor of a few hundred, i.e. they encompass the orbit of the Earth around the Sun - they are also distant and to peer into their deep envelopes requires very high resolution. This can only be achieved with interferometric techniques.

"Astronomers are like medical doctors, who use various instruments to examine different parts of the human body," said co-author David Boboltz. "While the mouth can be checked with a simple light, a stethoscope is required to listen to the heart beat. Similarly the heart of the star can be observed in the optical, the molecular and dust layers can be studied in the infrared and the maser emission can be probed with radio instruments. Only the combination of the three gives us a more complete picture of the star and its envelope."

The astronomers observed S Ori with two of the largest interferometric facilities available: the ESO Very Large Telescope Interferometer (VLTI) at Paranal, observing in the near- and mid-infrared, and the NRAO-operated Very Long Baseline Array (VLBA), that takes measurements in the radio wave domain.

Because the star's luminosity changes periodically, the astronomers observed it simultaneously with both instruments, at several different epochs. The first epoch occurred close to the stellar minimum luminosity and the last just after the maximum on the next cycle.

The astronomers found the star's diameter to vary between 7.9 milliarcseconds and 9.7 milliarcseconds. At the distance of S Ori, this corresponds to a change of the radius from about 1.9 to 2.3 times the distance between the Earth and the Sun, or between 400 and 500 solar radii!

As if such sizes were not enough, the inner dust shell is found to be about twice as big. The maser spots, which also form at about twice the radius of the star, show the typical structure of partial to full rings with a clumpy distribution. Their velocities indicate that the gas is expanding radially, moving away at a speed of about 10 km/s.

Furthermore, the astronomers found that grains of aluminum oxide - also called corundum - constitute most of S Ori's dust shell: the grain size is estimated to be of the order of 10 millionths of a centimetre, that is one thousand times smaller than the diameter of a human hair.

"We know one chapter of the secret life of a Mira star, but much more can be learned in the near future, when we add near-infrared interferometry with the AMBER instrument on the VLTI to our (already broad) observational approach," said Wittkowski.

A maser is the microwave equivalent to a laser, which emits visible light. A maser emits powerful microwave radiation instead and its study requires radio telescopes. An astrophysical maser is a naturally occurring source of stimulated emission that may arise in molecular clouds, comets, planetary atmospheres, stellar atmospheres, or from various conditions in interstellar space.

The research presented here is reported in a paper in press in the journal Astronomy and Astrophysics ("The Mira variable S Ori: Relationships between the photosphere, molecular layer, dust shell, and SiO maser shell at 4 epochs", by M. Wittkowski et al.). It is available in PDF format from the publisher's website.
The team consists of Markus Wittkowski (ESO), David A. Boboltz (U.S. Naval Observatory, USA), Keiichi Ohnaka and Thomas Driebe (MPIfR Bonn, Germany), and Michael Scholz (University of Heidelberg, Germany and University of Sydney, Australia). 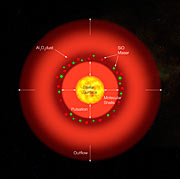 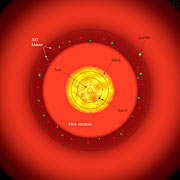