One of the thousands of minor planets orbiting the Sun has been found to have its own mini planetary system. Astronomer Franck Marchis (University of California, Berkeley, USA) and his colleagues at the Observatoire de Paris (France) [1] have discovered the first triple asteroid system - two small asteroids orbiting a larger one known since 1866 as 87 Sylvia [2].

"Since double asteroids seem to be common, people have been looking for multiple asteroid systems for a long time," said Marchis. "I couldn't believe we found one."

The discovery was made with Yepun, one of ESO's 8.2-m telescopes of the Very Large Telescope Array at Cerro Paranal (Chile), using the outstanding image' sharpness provided by the adaptive optics NACO instrument. Via the observatory's proven "Service Observing Mode", Marchis and his colleagues were able to obtain sky images of many asteroids over a six-month period without actually having to travel to Chile.

One of these asteroids was 87 Sylvia, which was known to be double since 2001, from observations made by Mike Brown and Jean-Luc Margot with the Keck telescope. The astronomers used NACO to observe Sylvia on 27 occasions, over a two-month period. On each of the images, the known small companion was seen, allowing Marchis and his colleagues to precisely compute its orbit. But on 12 of the images, the astronomers also found a closer and smaller companion. 87 Sylvia is thus not double but triple!

Because 87 Sylvia was named after Rhea Sylvia, the mythical mother of the founders of Rome [3], Marchis proposed naming the twin moons after those founders: Romulus and Remus. The International Astronomical Union approved the names.

Sylvia's moons are considerably smaller, orbiting in nearly circular orbits and in the same plane and direction. The closest and newly discovered moonlet, orbiting about 710 km from Sylvia, is Remus, a body only 7 km across and circling Sylvia every 33 hours. The second, Romulus, orbits at about 1360 km in 87.6 hours and measures about 18 km across.

The asteroid 87 Sylvia is one of the largest known from the asteroid main belt, and is located about 3.5 times further away from the Sun than the Earth, between the orbits of Mars and Jupiter. The wealth of details provided by the NACO images show that 87 Sylvia is shaped like a lumpy potato, measuring 380 x 260 x 230 km. It is spinning at a rapid rate, once every 5 hours and 11 minutes.

The observations of the moonlets' orbits allow the astronomers to precisely calculate the mass and density of Sylvia. With a density only 20% higher than the density of water, it is likely composed of water ice and rubble from a primordial asteroid. "It could be up to 60 percent empty space," said co-discoverer Daniel Hestroffer (Observatoire de Paris, France).

"It is most probably a "rubble-pile" asteroid", Marchis added. These asteroids are loose aggregations of rock, presumably the result of a collision. Two asteroids smacked into each other and got disrupted. The new rubble-pile asteroid formed later by accumulation of large fragments while the moonlets are probably debris left over from the collision that were captured by the newly formed asteroid and eventually settled into orbits around it. "Because of the way they form, we expect to see more multiple asteroid systems like this."

Marchis and his colleagues will report their discovery in the August 11 issue of the journal Nature, simultaneously with an announcement that day at the Asteroid Comet Meteor conference in Armação dos Búzios, Rio de Janeiro state, Brazil.

[2]: 87 Sylvia is the 87th minor planet discovered. It was first observed from the Observatory of Madras (India) on May 16, 1866, by the Government Astronomer Norman R. Pogson. It was common in the early days to assign a name - mostly feminine - from the mythology to newly found asteroids. Pogson selected a name from the list furnished to him by Sir John Herschel.

[3]: The mythical Romulus and Remus:

As related by the Roman historian Livy, who lived around the time of Christ, Rhea Silvia was forced to become a vestal virgin by her uncle, Amulius, after he overthrew her father, Numitor, king of the ancient Italian city of Alba Longa. Amulius wanted to ensure she would not have any sons who could attempt to overthrow him. Despite her virgin priestess status, Mars, the god of war, came to her in her temple and conceived with her twin sons, Romulus and Remus. When they were born, Amulius ordered a servant to kill the twins, but a merciful servant set them adrift in the river Tiber.

The twin boys were found by Tiberinus, the river god, and nursed by a female wolf underneath a fig tree. Romulus and Remus were eventually discovered by Faustulus, a shepherd, who brought the children to his home and, with his wife, Acca Larentia, raised the boys as their own. Upon reaching adulthood, Romulus and Remus returned and killed Amulius and reinstated Numitor, their grandfather, as king of Alba Longa.

The two subsequently built a settlement on the Palatine Hill, where they had been nursed by the she-wolf, beginning on April 21, 753 BC, the traditional date for the founding of Rome. During the building, Remus thoughtlessly jumped the unfinished city wall, an omen of ill fortune, and Romulus killed him. Romulus named the city Roma, after himself, and made himself king.

Marchis proposed Romulus as the name of the largest moonlet because the name means "forceful" (rhome in Latin). The name Remus is related to the word "cautious" (remorari) and seemed more appropriate to the smallest moon and the closest to Sylvia.

The press release of the University of California, Berkeley, is available here and the one from the Observatoire de Paris, here. 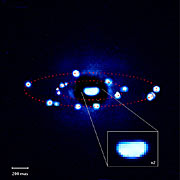 PR Video eso0526a
Asteroid Sylvia and her twins
Send us your comments!
Subscribe to receive news from ESO in your language
Accelerated by CDN77
Terms & Conditions