Mrs. Maria van der Hoeven, the Dutch Minister of Education, Culture and Science, who travelled to the Republic of Chile, arrived at the ESO Paranal Observatory on Friday afternoon, May 13, 2005.

The Minister was accompanied, among others, by the Dutch Ambassador to Chile, Mr. Hinkinus Nijenhuis, and Mr. Cornelis van Bochove, the Dutch Director of Science.

The distinguished visitors were able to acquaint themselves with one of the foremost European research facilities, the ESO Very Large Telescope (VLT), during an overnight stay at this remote site, and later, with the next major world facility in sub-millimetre and millimetre astronomy, the Atacama Large Millimeter Array (ALMA).

At Paranal, the guests were welcomed by the ESO Director General, Dr. Catherine Cesarsky; the ESO Council President, Prof. Piet van der Kruit; the ESO Representative in Chile, Prof. Felix Mirabel; the Director of the La Silla Paranal Observatory, Dr. Jason Spyromilio; by one of the Dutch members of the ESO Council, Prof. Tim de Zeeuw; by the renowned astrophysicist from Leiden, Prof. Ewine van Dishoek, as well as by ESO staff members.

The visitors were shown the various high-tech installations at the observatory, including many of the large, front-line VLT astronomical instruments that have been built in collaboration between ESO and European research institutes. Explanations were given by ESO astronomers and engineers and the Minister gained a good impression of the wide range of exciting research programmes that are carried out with the VLT.

Having enjoyed the spectacular sunset over the Pacific Ocean from the Paranal deck, the Minister visited the VLT Control Room from where the four 8.2-m Unit Telescopes and the VLT Interferometer (VLTI) are operated. Here, the Minister was invited to follow an observing sequence at the console of the Kueyen (UT2) and Melipal (UT3) telescopes.

"I was very impressed, not just by the technology and the science, but most of all by all the people involved," expressed Mrs. Maria van der Hoeven during her visit. "An almost unique level of international cooperation is achieved at ESO, and everything is done by those who can do it best, irrespective of their country or institution. This spirit of excellence is an example for all Europe, notably for the new European Research Council."

Catherine Cesarsky, ESO Director General, remarked that Dutch astronomers have been part of ESO from the beginning: "The Dutch astronomy community and industry play a major role in various aspects of the Very Large Telescope, and more particularly in its interferometric mode. With their long-based expertise in radio astronomy, Dutch astronomers greatly contribute in this field, and are now also playing a major role in the construction of ALMA. It is thus a particularly great pleasure to receive Her Excellency, Mrs. Maria van der Hoeven."

The delegation spent the night at the Observatory before heading further North in the Chilean Andes to San Pedro de Atacama and from there to the Operation Support Facility of the future ALMA Observatory.

On Sunday, May 15, the delegation went to the 5000m Llano de Chajnantor, the future site of the large array of 12m antennas that is being build there and should be completed by 2013. The Minister in particular could visit the 12m APEX (Atacama Pathfinder Experiment) telescope and see the technical infrastructure.

"I am fully confident that the worldwide cooperation in ALMA will be equally successful as the VLT, and I am convinced that the discoveries to be made here are meaningful for the Earth we live in", said Mrs. van der Hoeven. "History and future are coming together in the north of Chile, in a very special way," she added. "In the region of the ancient Atacamenos, scientists from all over the world are discovering more and more about the universe and the birth and death of stars. They even find new planets. They do that on Paranal with the VLT and soon will be doing that on the ALMA site."

The Minister and her delegation left for Santiago in the afternoon. 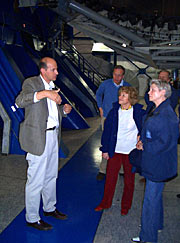 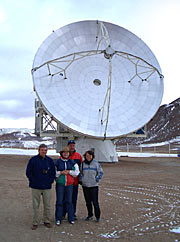