The Very Large Telescope Interferometer (VLTI) at Paranal Observatory has just seen another extension of its already impressive capabilities by combining interferometrically the light from two relocatable 1.8-m Auxiliary Telescopes. Following the installation of the first Auxiliary Telescope (AT) in January 2004, the second AT arrived at the VLT platform by the end of 2004. Shortly thereafter, during the night of February 2 to 3, 2005, the two high-tech telescopes teamed up and quickly succeeded in performing interferometric observations. This achievement heralds an era of new scientific discoveries. Both Auxiliary Telescopes will be offered from October 1, 2005 to the community of astronomers for routine observations, together with the MIDI instrument. By the end of 2006, Paranal will be home to four operational ATs that may be placed at 30 different positions and thus be combined in a very large number of ways ("baselines"). This will enable the VLTI to operate with enormous flexibility and, in particular, to obtain extremely detailed (sharp) images of celestial objects - ultimately with a resolution that corresponds to detecting an astronaut on the Moon.

A Most Advanced Device

Located at the summit of the 2,600-m high Cerro Paranal in the Atacama Desert (Chile), ESO's Very Large Telescope (VLT) is at the forefront of astronomical technology and is one of the premier facilities in the world for optical and near-infrared observations.

Contrary to other large astronomical telescopes, the VLT was designed from the beginning with the use of interferometry as a major goal. The VLT Interferometer (VLTI) combines starlight captured by two 8.2- VLT Unit Telescopes, dramatically increasing the spatial resolution and showing fine details of a large variety of celestial objects.

Moreover, these moving ultra-high precision telescopes, each weighing 33 tonnes, fulfill very stringent mechanical stability requirements: "The telescopes are unique in the world", says Bertrand Koehler, the VLTI AT Project Manager. "After being relocated to a new position, the telescope is repositioned to a precision better than one tenth of a millimetre - that is, the size of a human hair! The image of the star is stabilized to better than thirty milli-arcsec - this is how we would see an object of the same size as one of the VLT enclosures on the Moon. Finally, the path followed by the light inside the telescope after bouncing on ten mirrors is stable to better than a few nanometres, which is the size of about one hundred atoms."

The possibility to move the ATs around and thus to perform observations with a large number of different telescope configurations ensures a great degree of flexibility, unique for an optical interferometric installation of this size and crucial for its exceptional performance. The ATs may be placed at 30 different positions and thus be combined in a very large number of ways. If the 8.2-m VLT Unit Telescopes are also taken into account, no less than 254 independent pairings of two telescopes ("baselines"), different in length and/or orientation, are available.

Moreover, while the largest possible distance between two 8.2-m telescopes (ANTU and YEPUN) is about 130 metres, the maximal distance between two ATs may reach 200 metres. As the achievable image sharpness increases with telescope separation, interferometric observations with the ATs positioned at the extreme positions will therefore yield sharper images than is possible by combining light from the large telescopes alone. All of this will enable the VLTI to obtain exceedingly detailed (sharp) and very complete images of celestial objects - ultimately with a resolution that corresponds to detecting an astronaut on the Moon.

Auxiliary Telescope no. 1 (AT1) was installed on the observatory's platform in January 2004. Now, one year later, the second of the four to be delivered, has been integrated into the VLTI.

The installation period lasted two months and ended around midnight during the night of February 2-3, 2005. With extensive experience from the installation of AT1, the team of engineers and astronomers were able to combine the light from the two Auxiliary Telescopes in a very short time.

In fact, following the necessary preparations, it took them only five minutes to adjust this extremely complex optical system and successfully capture the "First Fringes" with the VINCI test instrument!

The star which was observed is named HD62082 and is just at the limit of what can be observed with the unaided eye (its visual magnitude is 6.2). The fringes were as clear as ever, and the VLTI control system kept them stable for more than one hour.

Four nights later this exercise was repeated successfully with the mid-infrared science instrument MIDI. Fringes on the star Alphard (Alpha Hydrae) were acquired on February 7 at 4:05 local time.

For Roberto Gilmozzi, Director of ESO's La Silla Paranal Observatory, "this is a very important new milestone. The introduction of the Auxiliary Telescopes in the development of the VLT Interferometer will bring interferometry out of the specialist experiment and into the domain of common user instrumentation for every astronomer in Europe. Without doubt, it will enormously increase the potentiality of the VLTI." With two more telescopes to be delivered within a year to the Paranal Observatory, ESO cements its position as world-leader in ground-based optical astronomy, providing Europe's scientists with the tools they need to stay at the forefront in this exciting science. The VLT Interferometer will, for example, allow astronomers to study details on the surface of stars or to probe proto-planetary discs and other objects for which ultra-high precision imaging is required.

It is premature to speculate on what the Very Large Telescope Interferometer will soon discover, but it is easy to imagine that there may be quite some surprises in store for all of us.

Information for the Media

Information for the Media

PR Image eso0508a
Paranal observing platform with AT1 and AT2

PR Image eso0508c
Evening at Paranal with AT1 and AT2 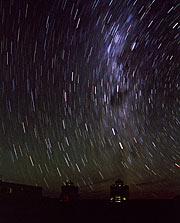 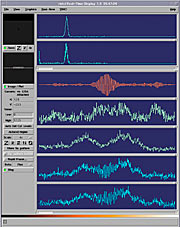