The main construction phase at the ESO Paranal Observatory is now over and normal operations have begun with two of the four 8.2-metre Unit Telescopes, ANTU and KUEYEN. The next major event will be the installation of the first astronomical instrument, VIMOS (VIsible MultiObject Spectrograph), at the third telescope, MELIPAL. "First Light" for the fourth telescope, YEPUN will follow later this year. The present collection of 29 photos illustrates the current state of the VLT site. They have been divided by theme into five sections that may be accessed by clicking on the corresponding images above.

These photos were made by ESO photographer Hans Hermann Heyer in March 2000. Depending on the nature of the subject as well as the properties of the available photographic films, Leica M6, Hasselblad SWC, Linhof Technika 6x9 or Sinar 4x5" cameras were used. The objective focal length ranged from 21mm to 280mm, resulting in viewing angles from approximately 10° to 115°. Various Fuji and Kodak colour slide films with speeds from 18°/50 to 36°/3200 ISO/ASA were used. The reproductions shown here were scanned from the original films and image processed by the author.

A Home in the Desert

The Basecamp is located below the Paranal mountain. It is centre of the daily life at Paranal, with the various service buildings, laboratories and offices, as well as dormitories for staff and visitors.

The new Paranal Residencia is now being constructed on the slope south of the Basecamp. When ready in 2001, it will house the offices and sleeping quarters. Some of the containers in the Basecamp will then be removed.

Preparing for the Observations

Normally, they start with a series of test and calibration exposures that serve to determine the exact status of the various instruments, e.g., in terms of sensitivity at different wavelengths.

Some of these exposures are performed on a white target on the inside of the telescope enclosure, others are made on the sky, as it gets progressively darker.

If they are included in a programme, observations of comparatively bright objects may be carried out while the sky is still relatively bright. However, those of the faintest objects must wait until the period of "astronomical twilight" is over, i.e., when the Sun is at least 18° below the horizon.

Hub of the Observatory

The Control Building is located on a "shelf" below the main observing platform at the top of the Paranal Mountain. It is the true hub of the Paranal Observatory and it is from here that the VLT telescopes and instruments are controlled by the observing teams. Daytime maintenance routines are also carried out by the ESO engineers via the computer terminals and monitors here.

Each of the four Unit Telescopes is controlled from a specific area (a "module") within the Control Room . From here, the night assistants, engineers and astronomers perform the observations. The work includes continuous monitoring and optimisation of the telescope status, pointing of the telescope towards the celestial objects to be observed, adjustments of the instrument (camera, spectrograph) before the exposures, as well as subsequent transfer and storage of the data from the instrument and a first evaluation of the results.

The fact that all work is done from a single room greatly facilitates the direct interaction between the different groups of observers.

A New Coat for a Large Mirror

Astronomical mirrors must be regularly coated in order to retain their ability to reflect light efficiently. Otherwise, too many of the sparse and precious photons collected from distant celestial objects may be lost, adversely influencing the observing programmes.

ANTU and KUEYEN, the two first VLT Unit Telescopes to enter into operation did so while construction work was still ongoing at the top of Paranal. During this period, there was unsually much dust in the air, some of which was deposited on the large mirrors of these two telescopes.

It was therefore decided to re-aluminize these mirrors when the work was over. This was done in February and March 2000.

For this delicate operation, the mirror cell with the 22-tonnes, 8.2-m Zerodur mirror is removed from the telescope and wrapped in a protective cover. It is then moved out of the telescope enclosure and placed on a carriage that is hauled down the mountain to the Mirror Maintenance Building (MMB).

Reinstallation of the Mirrors

Following the coating of the 8.2-m main mirror of KUEYEN , the mirror in its cell was returned to the telescope enclosure.

Here it was remounted on the telescope structure in a series of operations that involved, among others, the installation of the so called M3-tower in the central hole in the mirror. This structure supports the tertiary mirror (M3) that deflects the light towards the Nasmyth foci on the sides of the telescope.

PR Image eso0021a
A home in the desert — Paranal Basecamp 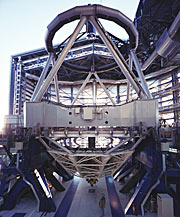 PR Image eso0021b
A home in the desert — Paranal Basecamp

PR Image eso0021c
A home in the desert — Paranal Basecamp 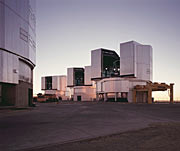 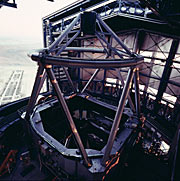 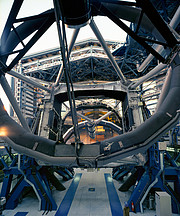 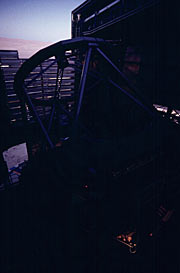 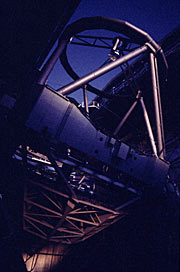 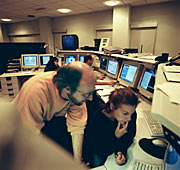 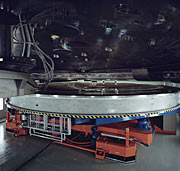 PR Image eso0021w
Back to the KUEYEN enclosure 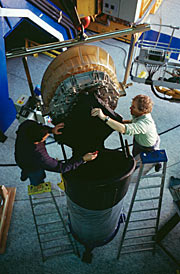 PR Image eso0021z
Mounting the 8.2-m main mirror of KUEYEN
Send us your comments!
Subscribe to receive news from ESO in your language
Accelerated by CDN77
Terms & Conditions