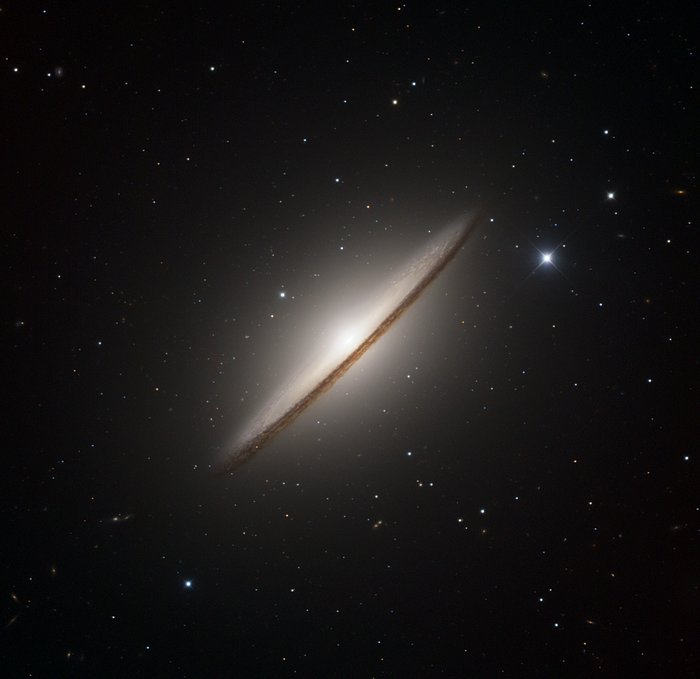 One of most famous spiral galaxies is Messier 104, widely known as the "Sombrero" (the Mexican hat) because of its particular shape. It is located towards the constellation Virgo (the ‘virgin’), at a distance of about 30 million light-years and is the 104th object in the famous catalogue of deep-sky objects by French astronomer Charles Messier (1730 - 1817).

This luminous and massive galaxy has a total mass of about 800 billion suns, and is notable for its dominant nuclear bulge, composed mainly of mature stars, and its nearly edge-on disc composed of stars, gas, and dust. The complexity of this dust is apparent directly in front of the bright nucleus, but is also evident in the dark absorbing lanes throughout the disc. A large number of small, diffuse objects can be seen as a swarm in the halo of Messier 104. Most of these are globular clusters, similar to those found in our own Milky Way, but Messier 104 has a much larger number of them. This galaxy also appears to host a supermassive black hole of about 1 billion solar masses, one of the most massive black holes measured in any nearby galaxy, and 250 times larger than the black hole in the Milky Way. Despite having such a massive black hole at its centre, the galaxy is rather quiet, implying that the black hole is on a very stringent diet.